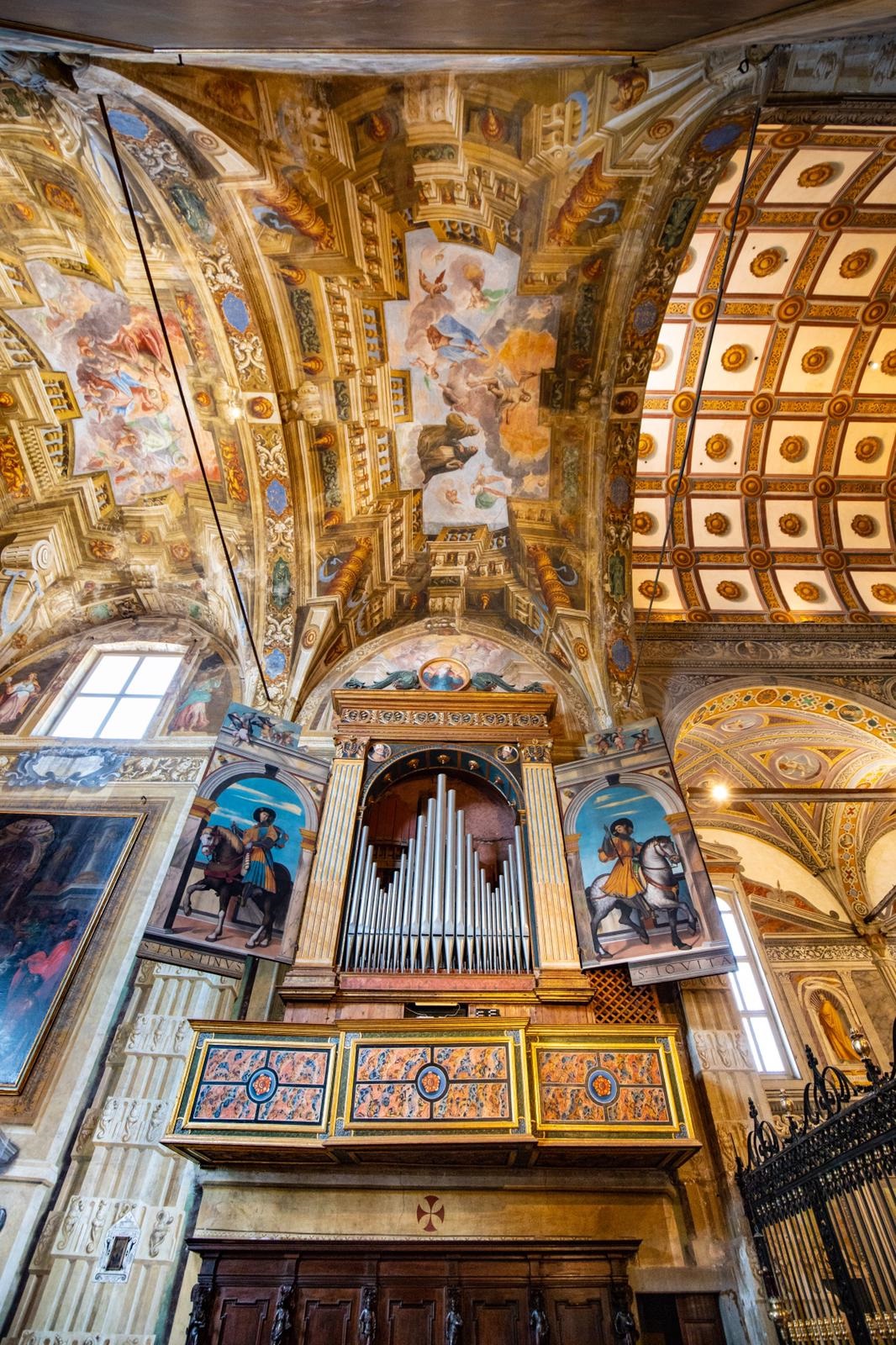 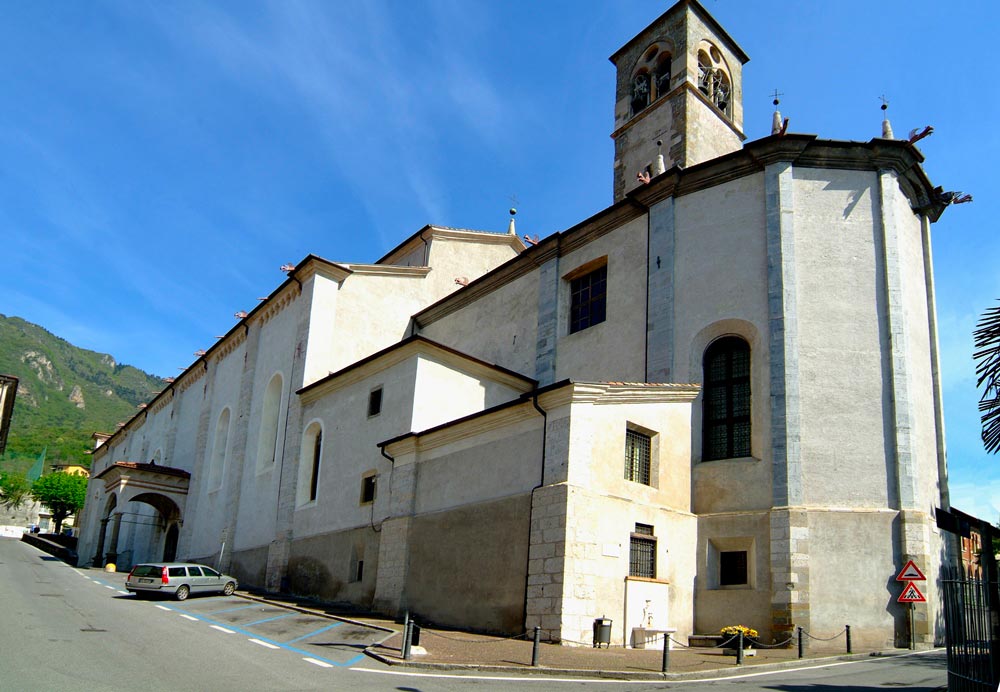 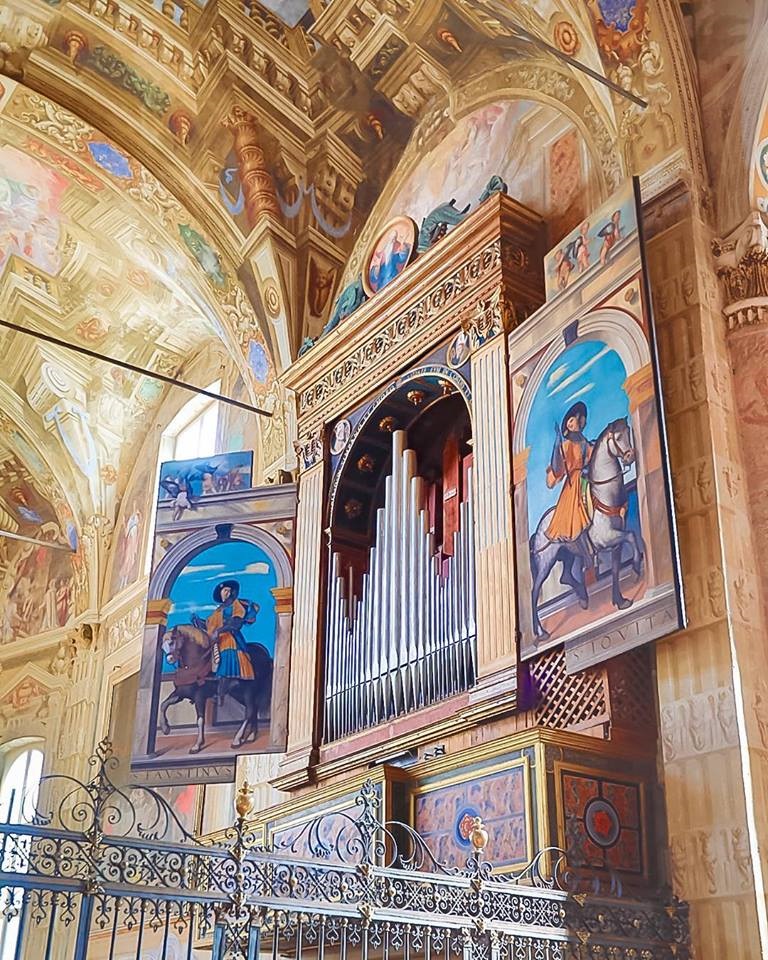 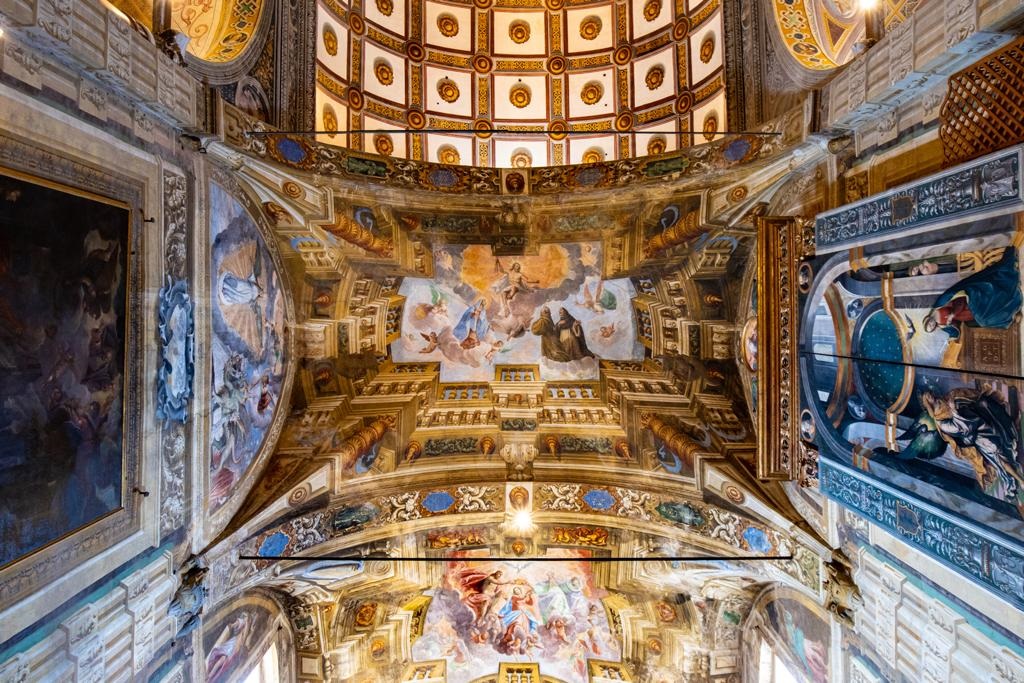 Santa Maria in Valvendra, the largest church in the Diocese of Brescia, is located at the northern end of Lovere, outside the Borgo that developed between the 15th and 16th centuries outside the 14th century walls.

The Church was built as a votive shrine dedicated to Our Lady of Graces by families of the Borgo that had made a great deal of money from the trade of well-known Lovere cloth.

Construction of this imposing church started in 1473, possibly on existing remains. The Valvendra torrent had to be diverted to construct this church, thus its name, as built in the centre of the old riverbed.

In 1513-1514 a decision was taken to set up a convent of the Observant branch of the Franciscan Order who had already served the church since the eighties of the 15th century and an adjoining woollen mill to produce the friars’ fabric, closed in 1779. The Church was finally consecrated on 2 August 1520.

Construction started in late Gothic style and continued in Lombard-Venetian Renaissance style. The exterior façade is bare, marked by four buttresses and preceded by a portico with cross vaults adorned with murals. To the side there are two gothic shaped windows with a rose window above. The Renaissance style portal, made by the Milanese sculptor Damiano Benzoni, in 1519, has a 16th Century fresco of the Annunciation within its lunette. On the right the porch with interwoven trim portal is of Tyrolean style.

The Interior is divided into three aisles with two rows of columns. The centre nave is covered by a barrel vault. It was covered in frescos by Floriano Ferramola of Brescia in 1514 with coffered ceiling on the vault, a large Annunciation on the front of the triumphal arch, the Twelve Apostles and the Symbols of the Evangelists above the columns and the Fathers, Doctors of the Church and Theologians in the cornice. The side aisles, covered by cross vaults, have illusionistic paintings housing figures of the Prophets and Sibyls made in 1594.

The nine chapels on the left hand side, enclosed by iron gates, were built between the first and the second decade of the 16th Century. Works of note include the frescos of the second chapel, dedicated to the Holy Trinity, made in 1580 by an artist close to the author of the high altar altarpiece, those of the fourth and fifth Chapels, dedicated to Saint Joseph and the Immaculate Conception, made in 1544 and 1535 by Andrea da Manerbio and, finally, the paintings in the chapel of Saint Francis, made by Gian Giacomo Barbelli in 1647.

The sanctuary, enclosed by a majestic gate, is divided into two bays ending in the polygonal apse. The walls are frescoed with illusionistic paintings created by Ottavio Viviani between 1645 and 1646 and scenes from the life of the Virgin culminating in the Coronation of the Virgin by Ottavio Amigoni in the vault of the centre bay.

The organ, made in 1518 for the old Brescia cathedral, is on the right wall. It was transferred to Lovere in the second half of the 17th century. The case, designed by Stefano Lamberti, is characterized by its doors, painted on the outside by Floriano Ferramola with the Annunciation and on the inside by Alessandro Bonvicino, known as il Moretto, with Saints Faustinus and Jovita, patron saints of Brescia, masterpiece of early 16th century painting in Brescia. The three large 17th century paintings on the walls with scenes from the life of Christ, are by Bernardino Gandino and Domenico Carpinoni (to the left), and Gian Giacomo Barbelli (to the right).

The marble high altar (1719-1720), made by Andrea Fantoni, has a throne to display the Sacramental bread. The altarpiece in the background, enclosed within an impressive gilded wooden frame, dating back to 1592, depicts the Assumption and was made by the painter Tommaso Bona. The 16th century wooden choir with intarsia (inlaid woods) is the work of Clemente Zamara.

On other days & times open on request for groups only at the Tourist Office (+39 035 962178 | [email protected]) at least two days before of the selected date of your visit. Free admission.