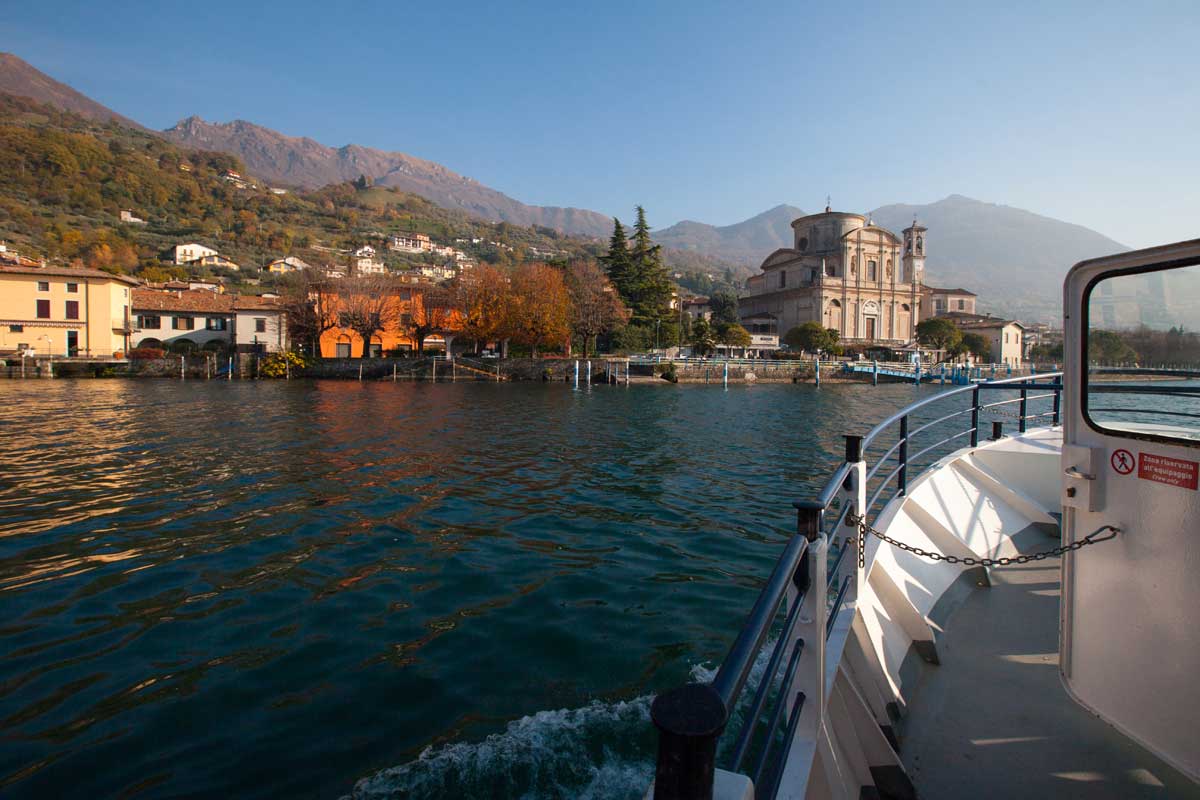 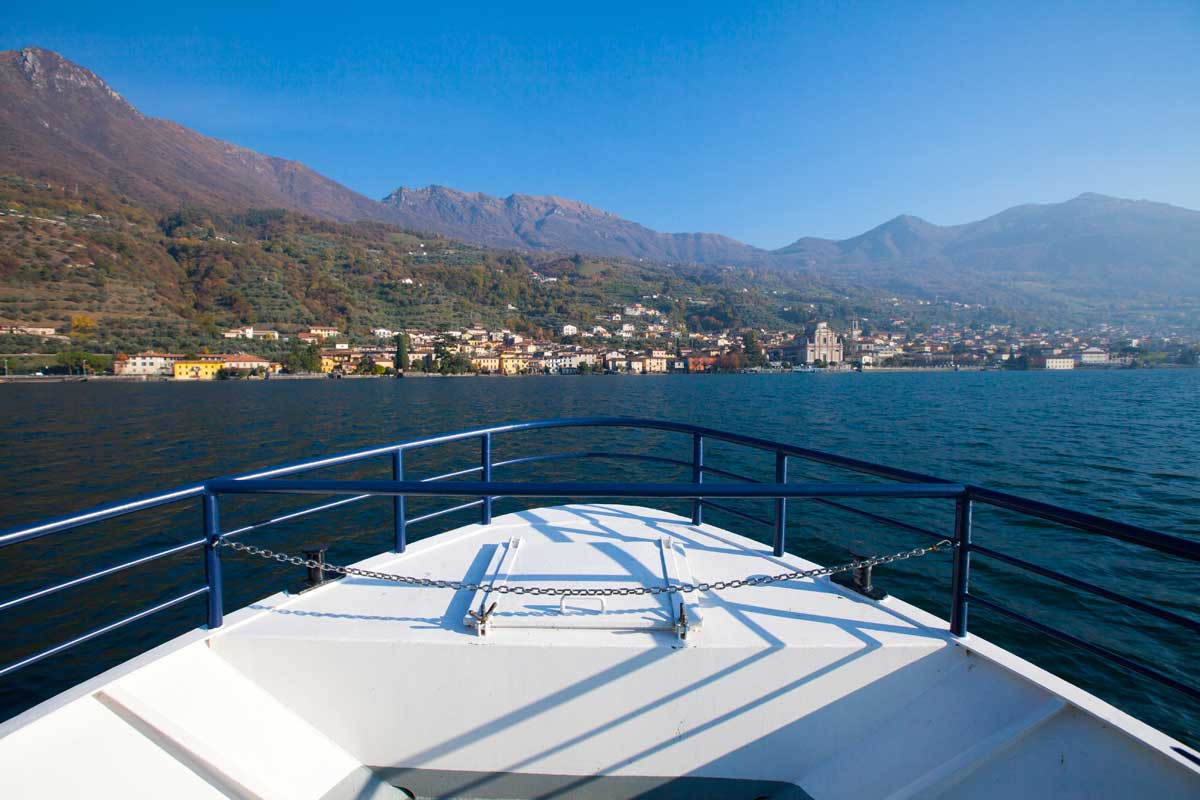 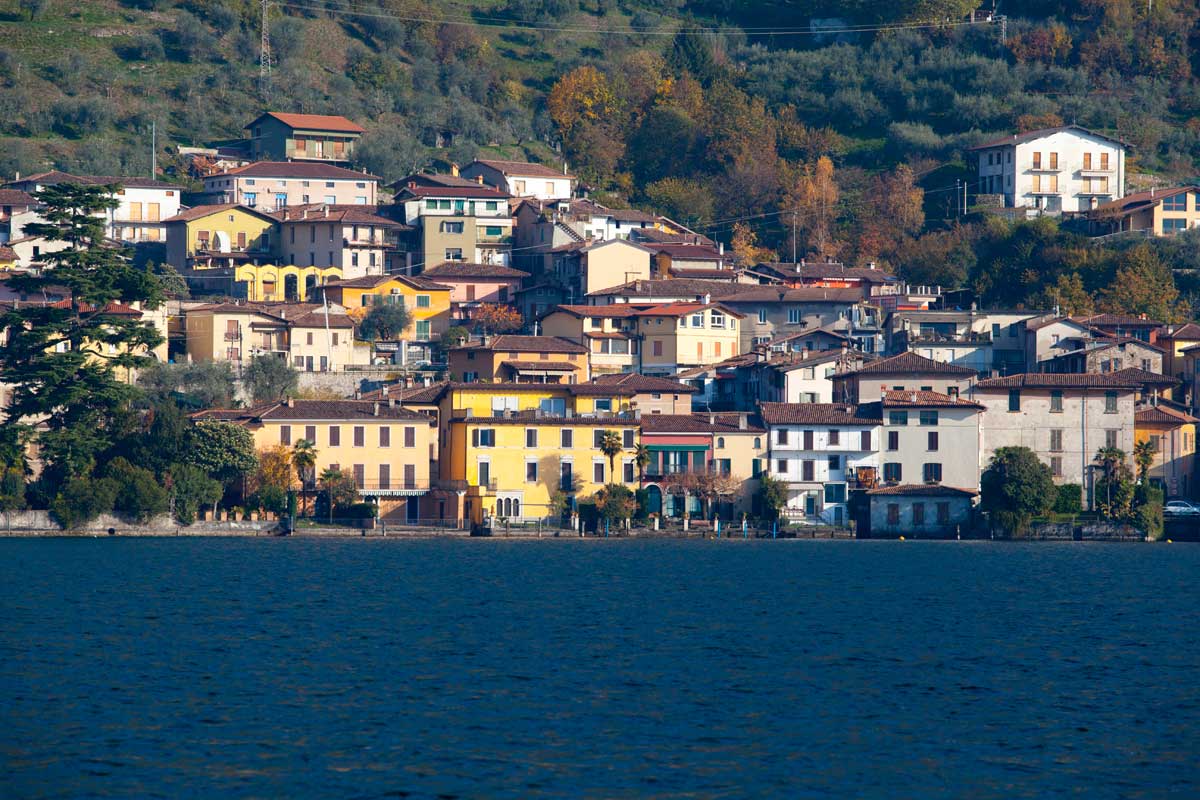 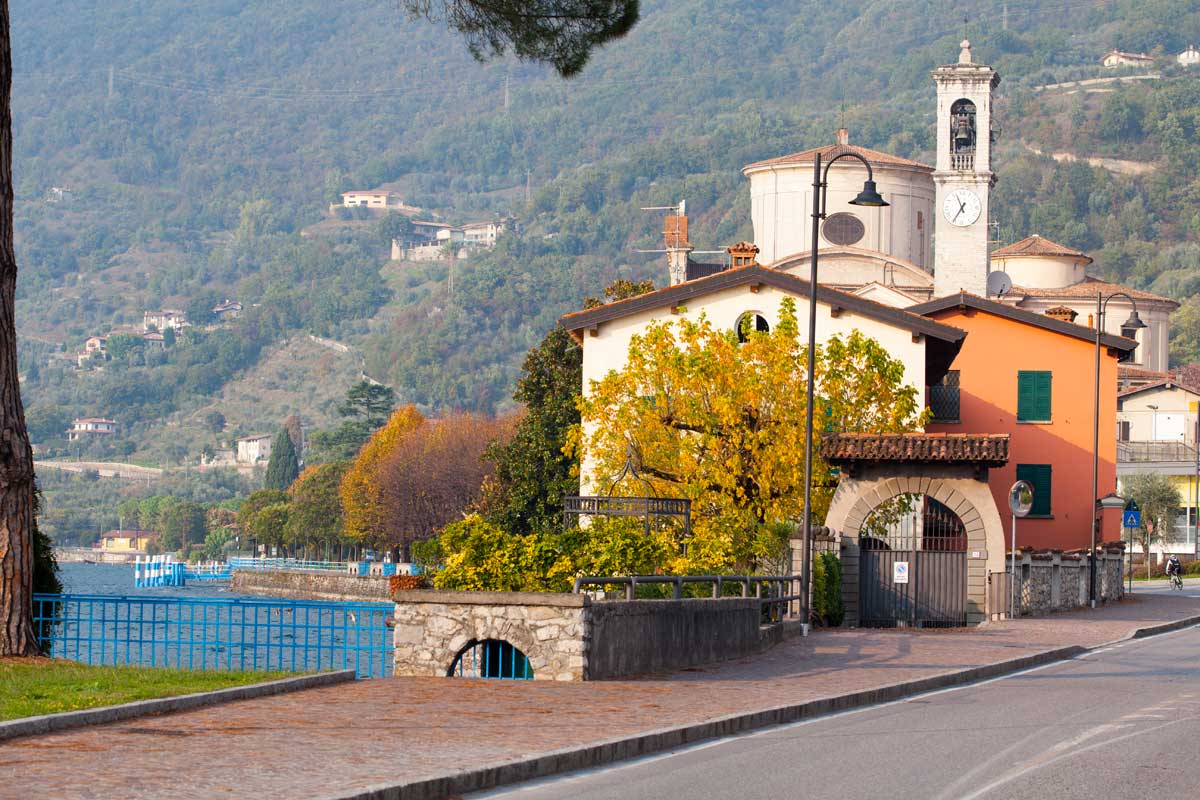 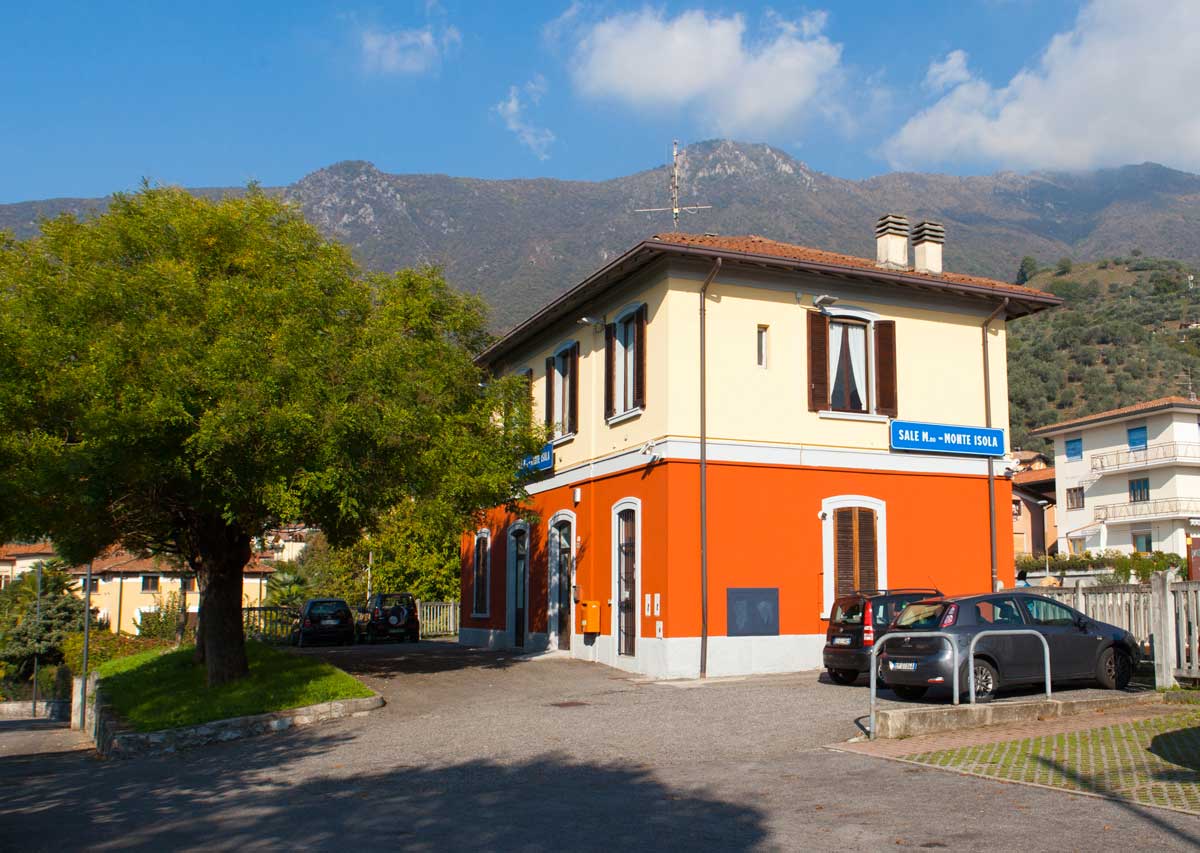 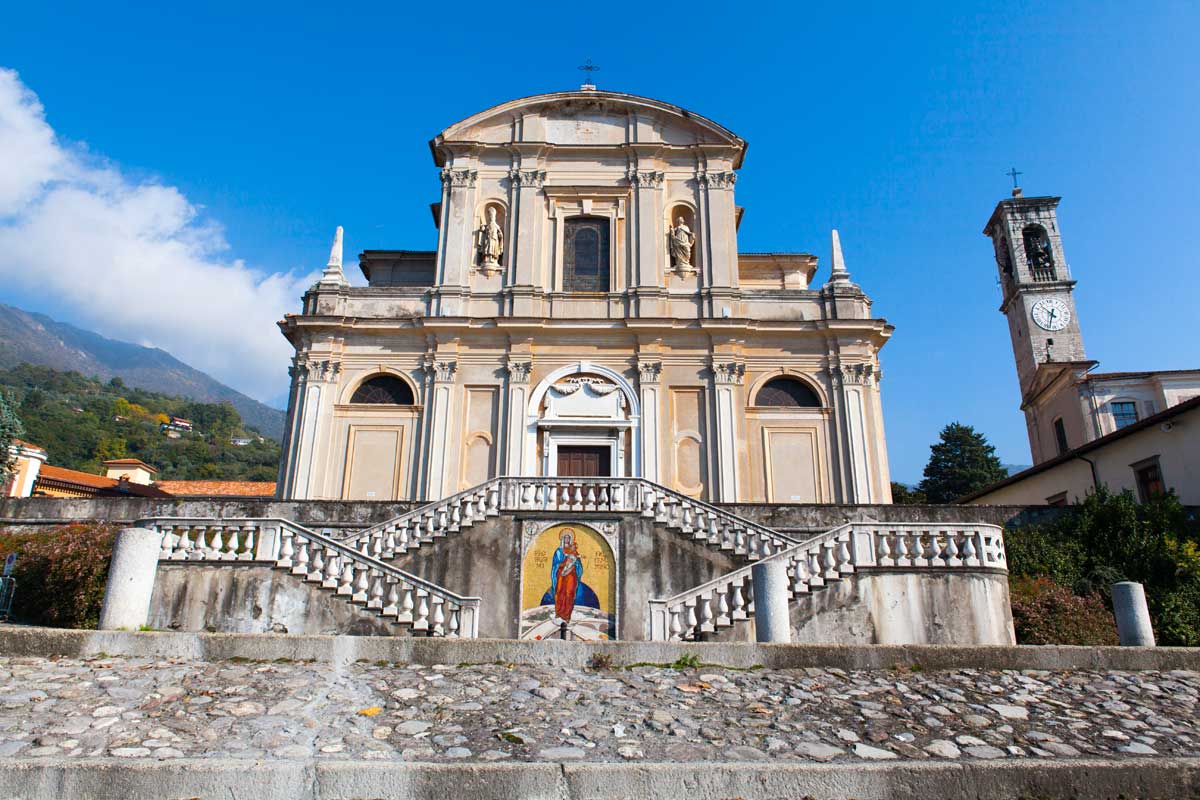 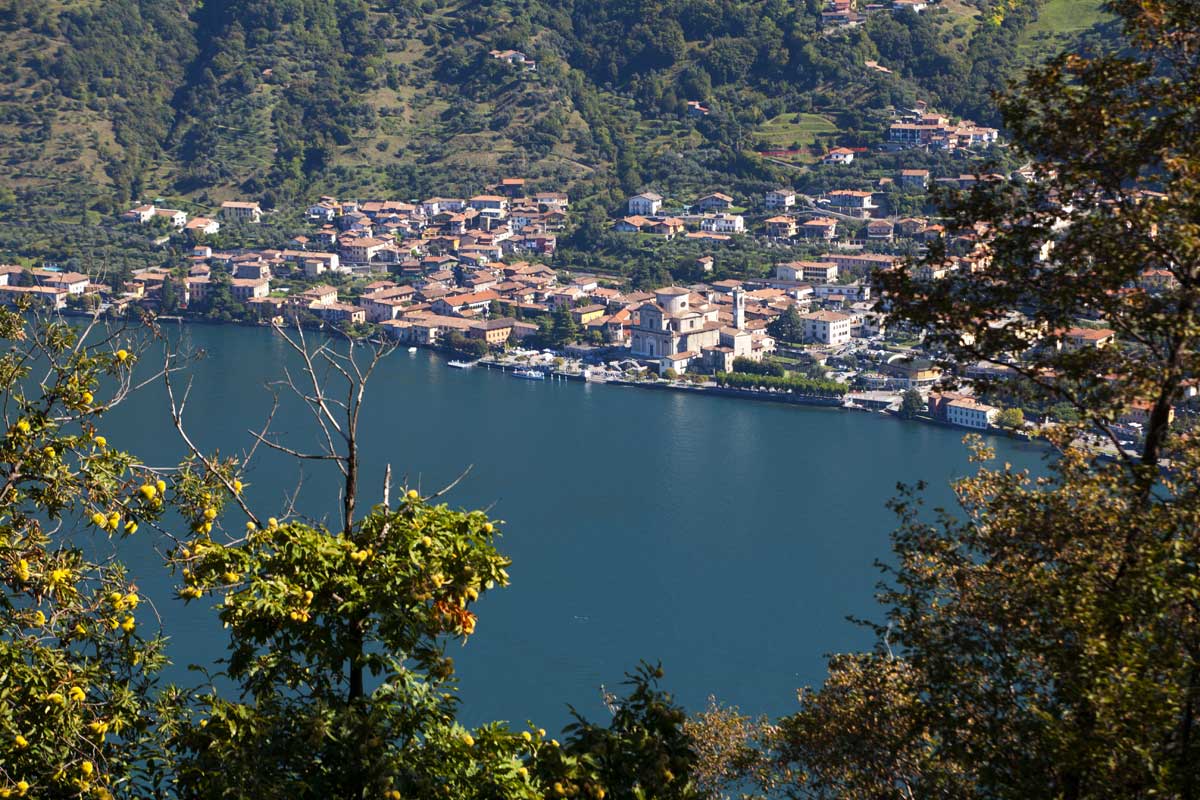 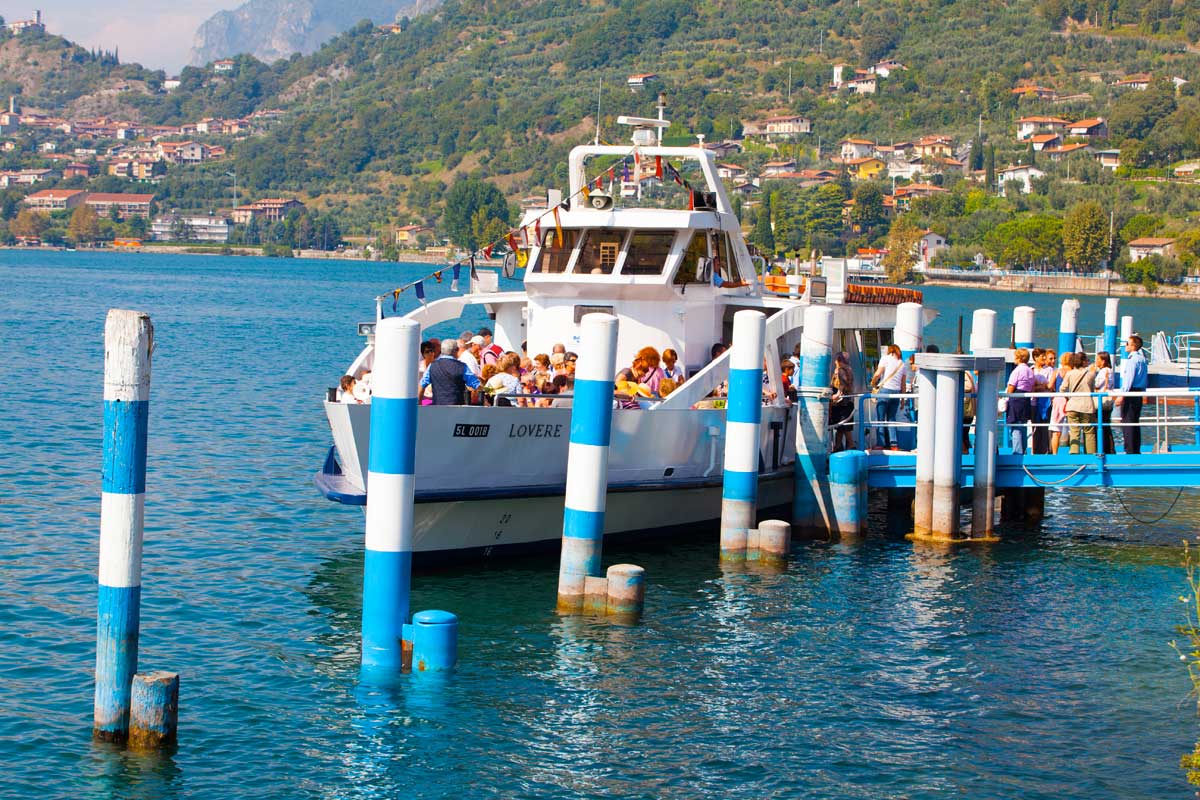 Sale Marasino, thanks to its optimal position, was chosen as a summer residence by many nobles from Brescia as evidenced by the elegant buildings still overlooking the lake. Among them is Villa Martinengo-Villagana, a typical example of Renaissance architecture which, with its majestic park, is the most significant residence on the lake.
The town divides its tourist resources between the lake and the hills, where characteristic 16th century hamlets offer splendid views.  A boat service connects Sale Marasino to Monte Isola with frequent trips.

SIGHTSEEING ATTRACTIONS
There are many interesting works of art in its churches.  The parish church of San Zenone, with its spectacular staircase, is dedicated to the saint who, according to tradition, protects freshwater fishermen.  It was built opposite the port in the 18th century. The interior is richly decorated in Baroque style.
On the main street there is the church of San Pietro dei Disciplini ( 16th century) which preserves frescoes of the early 16th century. The fifteenth-century church of San Antonio Abate is located in the historic centre of Marasino, with frescoes of considerable artistic value. In Gandizzano, the church of Santa Maria della Neve (16th century) is well worth a visit. In Maspiano there is the sixteenth-century church of San Giacomo Apostolo. In Conche, last but not least, the beautiful church of San Giovanni Battista built in 1700.

TOURS AND EXCURSIONS
Trip to Monte Isola – From the pier, located right in front of the imposing Parish Church, there is a boat service that runs every twenty minutes to reach Monte Isola. Once in Carzano, it is possible to travel around the island (approximately 9 km), on foot or by bicycle, or climb to the Sanctuary ( gradient 400 m), where the effort of the climb is amply rewarded by the beauty of the landscape and the spectacular view.
Ancient Valerian Road – In the hillside hamlets, from Maspiano to Massenzano, it is possible to take the Ancient Valerian Road, a panoramic trail easily accessible towards the south, direction Sulzano (5 km) and Iseo (10 km). It is slightly more challenging towards the north, to reach the localities of Marone (2 km), Zone (7 km) and Pisogne (15 km).
Punta Almana 1390 meters – A trekking route from Portole (560 m), where, by following the Filippo Benedetti trail on the left, it is possible to reach first the Forcella di Sale (1018 m) and then the peak (1390 m – Walking time 3 hours -gradient 830 m – challenging).

IT IS USEFUL TO KNOW THAT
The parking lots in Sale Marasino are almost all subject to a fee and work with the “scratch card” system. The card must be purchased from the shops and its cost is based on the length of the stay. So, you scratch the hypothetical time of return and then display the card on the car dashboard.

HOW TO GET THERE
By train – Sale Marasino is served by the Brescia-Iseo-Edolo regional railway line which, crossing Franciacorta, connects the city to the eastern shore of Lake Iseo and the Camonica Valley. The train station is located in the historic centre, 3 minutes walk from the pier. Info and timetables: Trenord
By bus – The Brescia-Iseo-Edolo line is also served by buses, but the railway line remains the more convenient and frequent.  The main stop is in via Roma near the parish church.  Info and timetables: FNM Autoservizi


Sport and nature in Sale Marasino

Once left Tassano, you will turn into the trail that runs by the ex-SS 510 on the left, before the u...

From the car park in Portole, take the paved road up to the information board indicating the two rin...

Sale Marasino looks onto the eastern shore of Lake Iseo in front of Monte Isola with Mount Guglielmo...

Located to the east of the town of Sale Marasino, Punta Almana stands as a natural watershed between...

It was 1986 when a group of friends became passionate about paragliding, those were times when this ...

The parish church in Sale Marasino, dedicated to the fishermen’s patron saint, represents one ...

The church of San Giovanni Battista (St. John the Baptist) is located on the hillside in the area of...

The church of Santi Pietro e Paolo (St. Peter and Paul), in Curetto district, was managed since it...

Church of Beata Vergine in Gandizzano

The Church of Santa Maria della Neve (Madonna of the Snows) is also known as Beata Vergine (Blessed...

Church of Sant’Antonio Abate in Marasino

The church of the village of Marasino stands at the fork in the hillside road crossing the inhabit...

Church of San Giacomo in Maspiano

Maspiano, a small district of Sale Marasino, rises on the hillside along the ‘Valleriana’ stre...

A small exhibition area housed in the Alpine Troops premises, abounding with relics from the two Wor...

Looking directly onto the lake with a centuries-old park, the palace is the most important historic ...

The municipality of Sale Marasino has a population of around 3,300 inhabitants, distributed among hi...

The 18th Century church of St. Zenone stands on the area where the Romanesque baptismal church was...

LAKETOMOUNTAIN is born to promote mainly Lake Iseo, Camonica Valley and Franciacorta Region, as a br...

Immersed in the greenery of a large garden facing the lake there is Villa Kinzica: an elegant hotel ...

Detached villa with functional furniture and spacious terrace overlooking the lake, which is only 10...

The house consists of 2 rooms, a kitchen-dining room, a bathroom and a large terrace with beautiful ...

Anna is a nice and bright apartment that overlooks Lake Iseo. From the terrace you can enjoy beautif...

Located in the countryside of Sale Marasino, Cascina Narovina offers rustic-style accommodation with...

The house is located in Portole at about 600 meters above sea level. It consists of a rather large r...

Situated on Lake Iseo, in a characteristic ancient residence with a beautiful courtyard surrounded b...

Apartment rentals on lake Iseo, in Sale Marasino, with pool, garden and private parking. There is a ...

In our house we have made B&B rooms, all with private entrance, private bath, air conditioning, ...

La Piazzetta B&B is located in the historic centre of Sale Marasino, 30 metres from the banks of...

The hotel and restaurant Orazio welcomes its guests in a friendly and family-style place, offering a...

Situated in a natural amphitheatre, embraced by the mountains and with a spectacular lake view, our ...

Where to eat in Sale Marasino