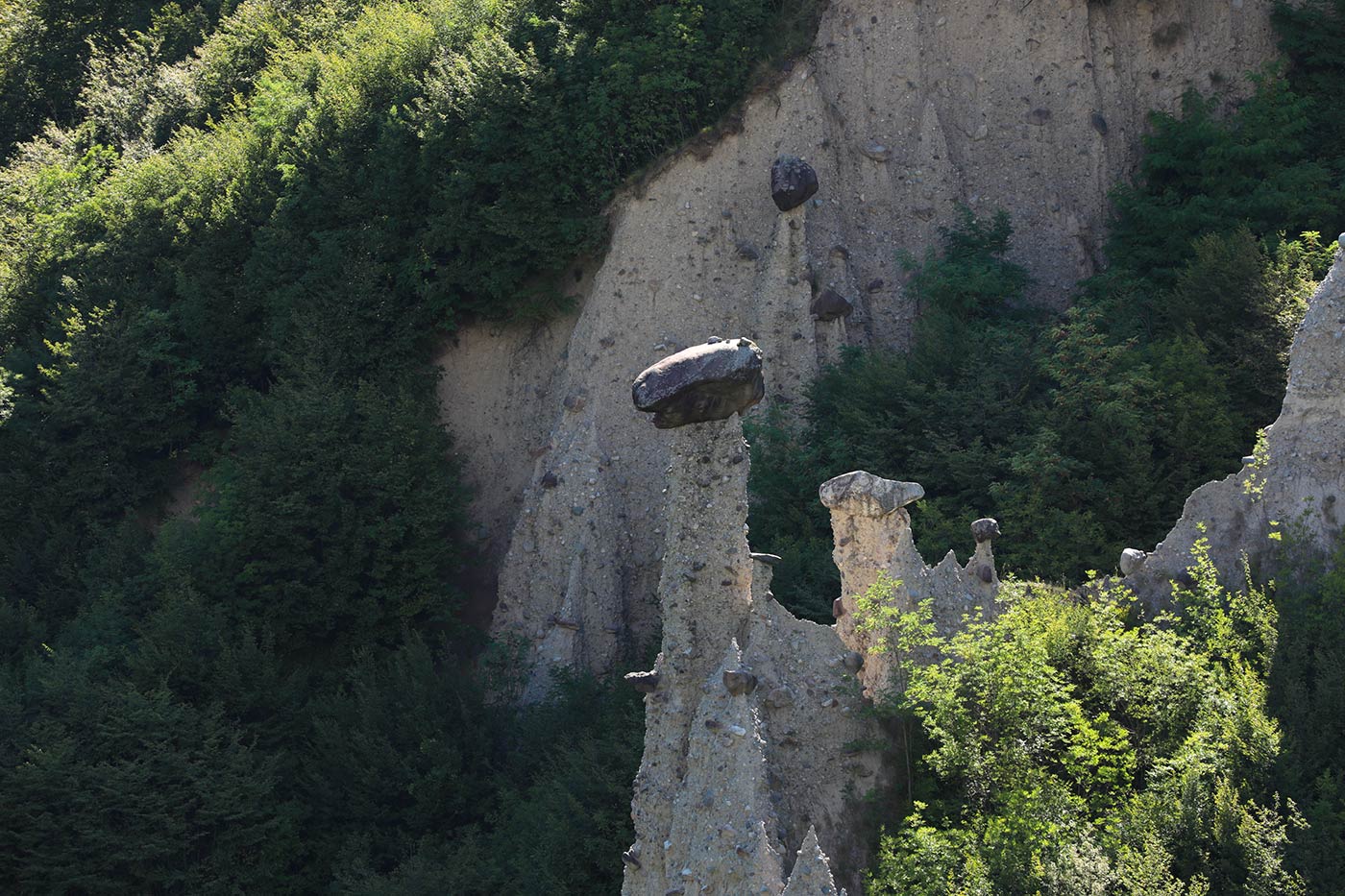 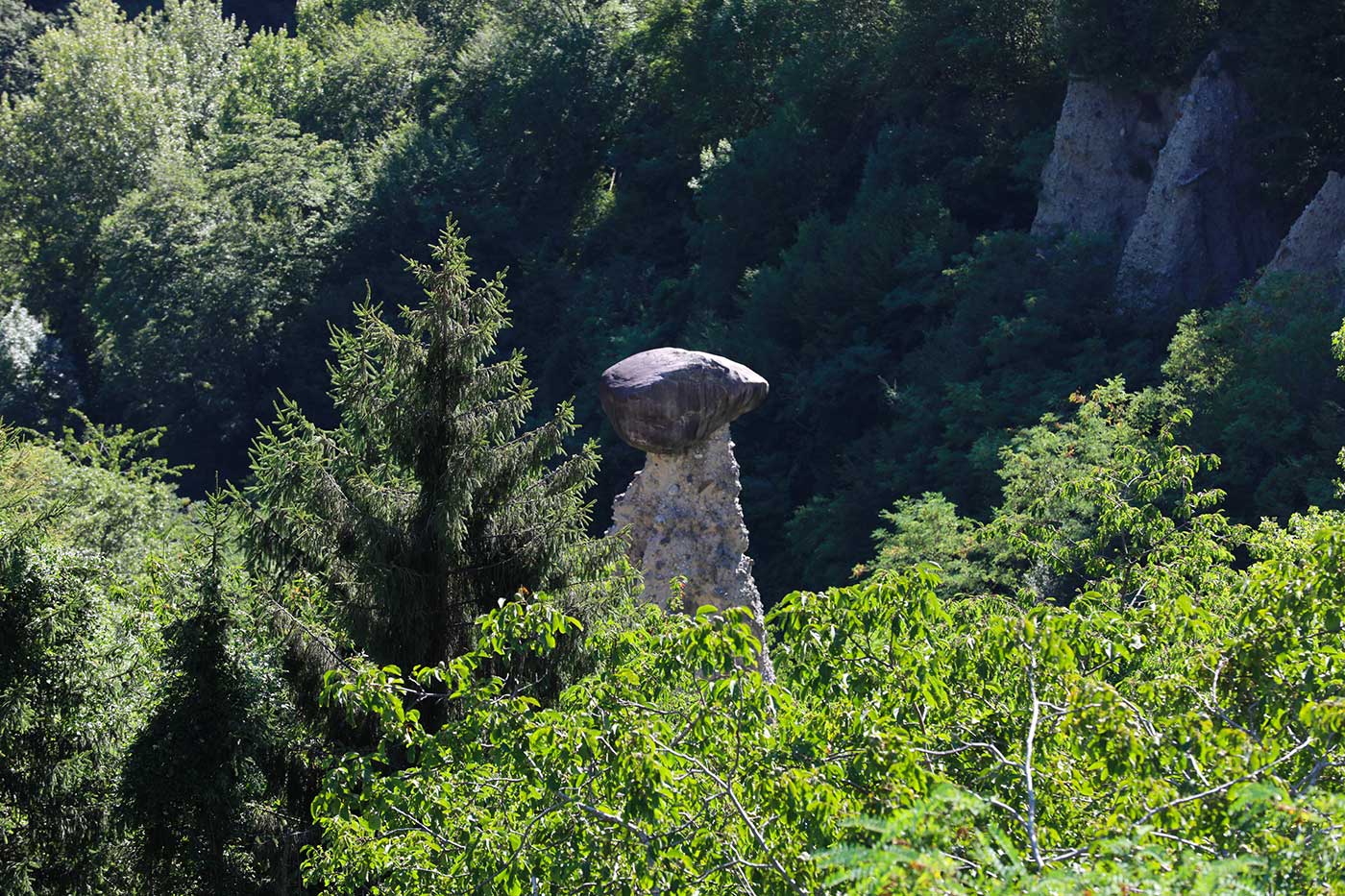 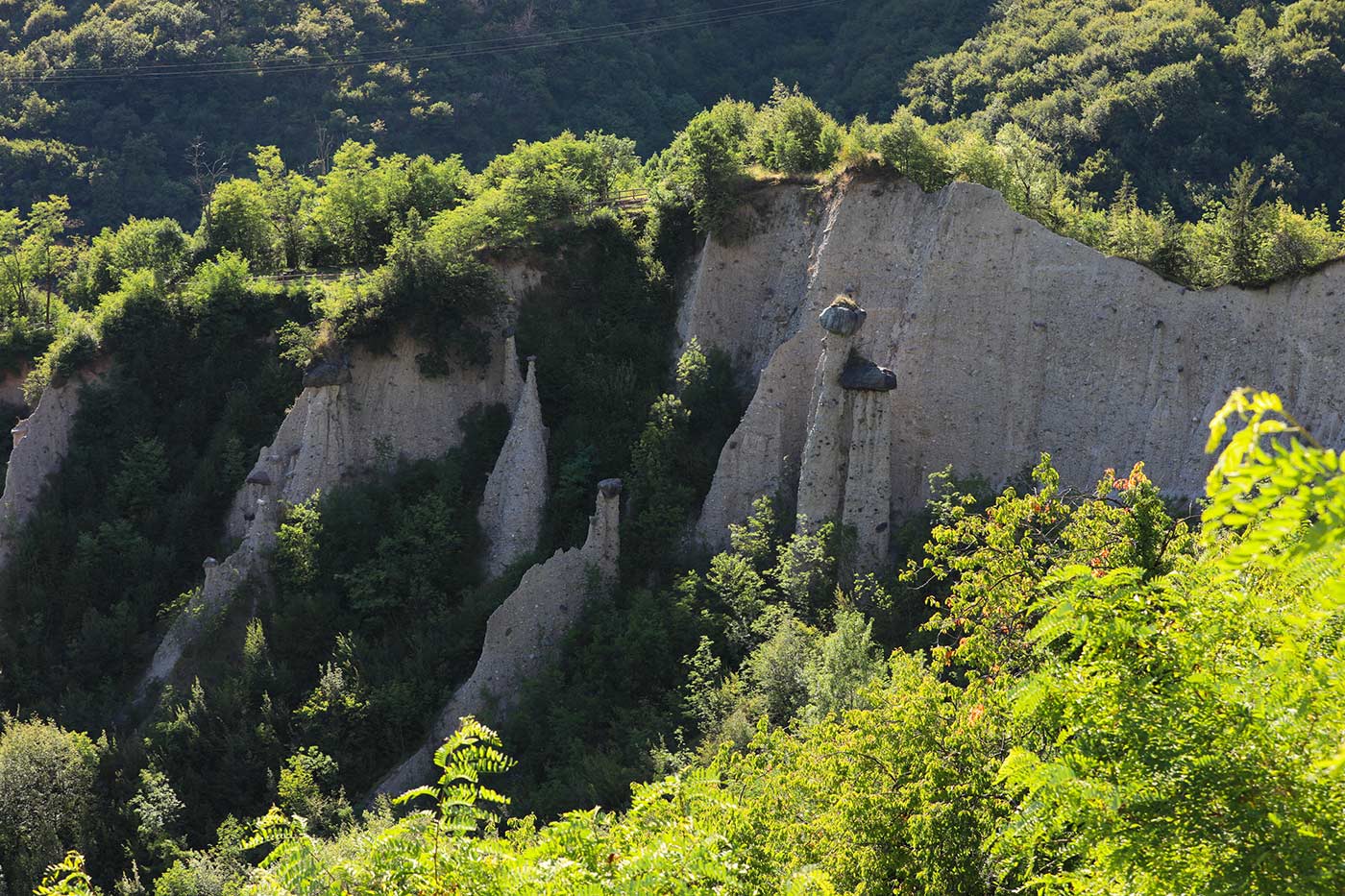 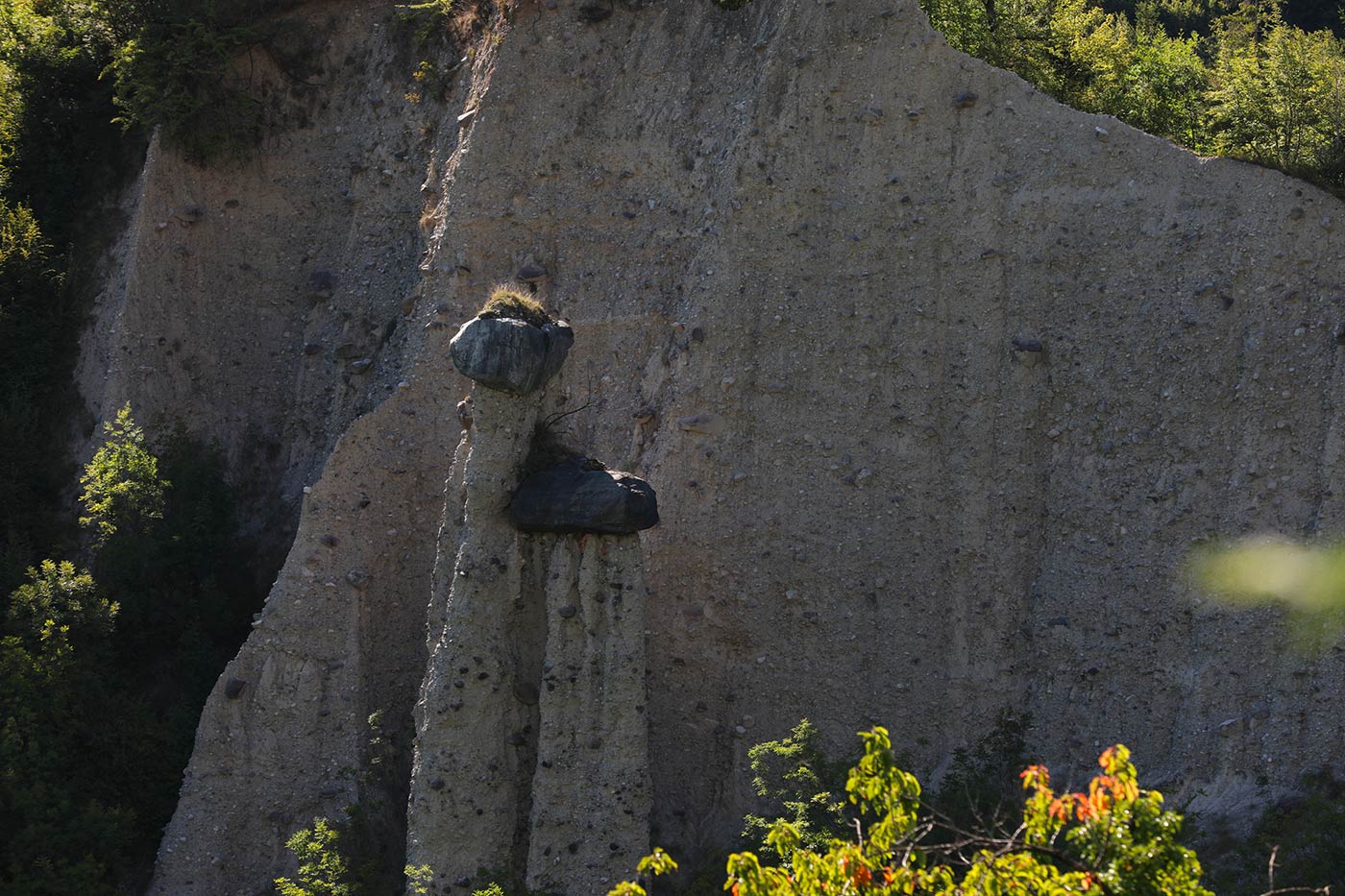 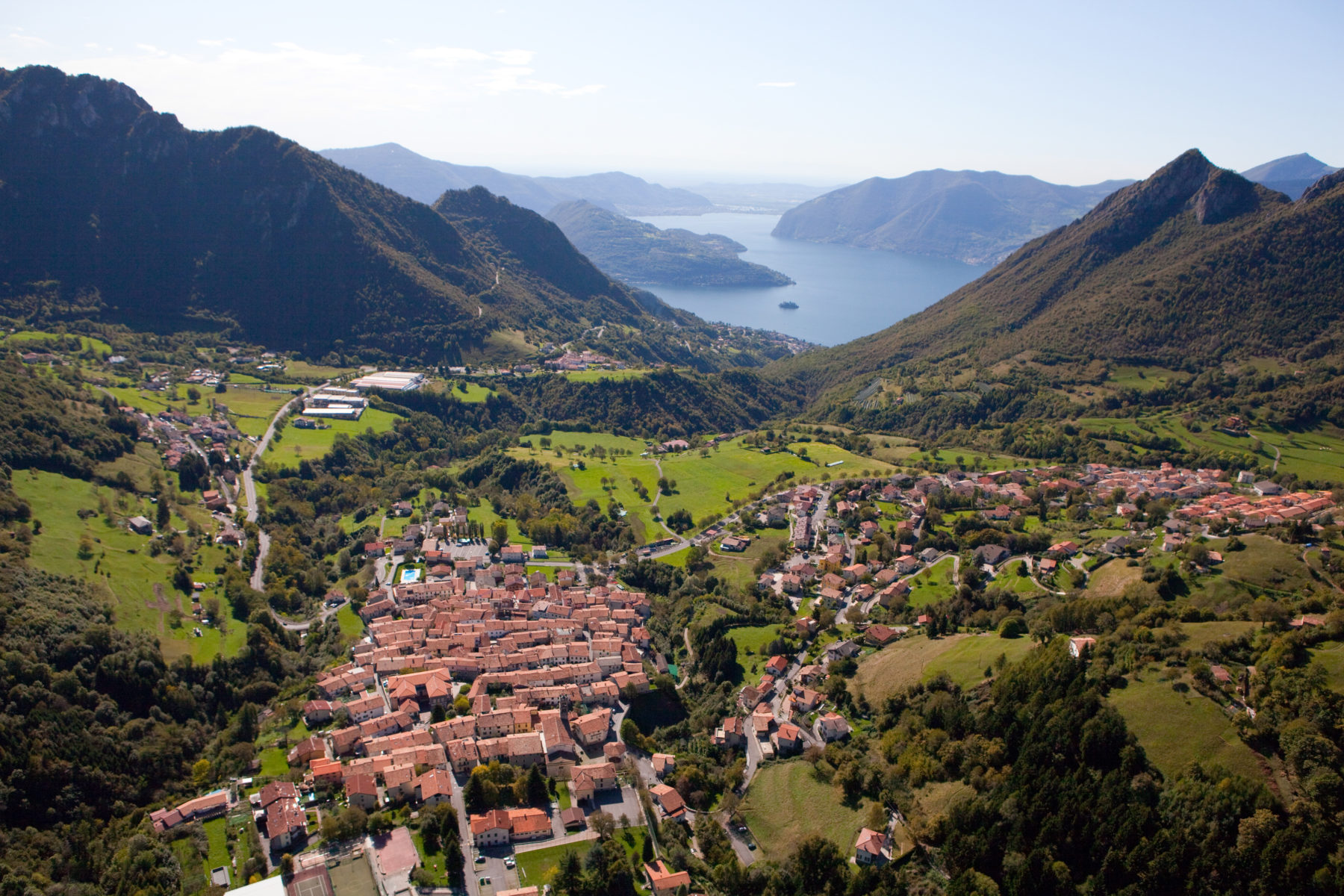 ” The Erosion Pyramids Town”, located at about seven hundred meters above sea level at the foot of Monte Guglielmo, is a quiet resort, visited all year round by trekking lovers, who can find countless paths to explore. Zone is also known for its gastronomy with tasty traditional recipes based on mushrooms and local game meat.

SIGHTSEEING ATTRACTIONS
In the old town centre, with old wooden and stone houses, some of which date back to the 17th century, there is the parish church of S. Giovanni Battista (17th century).  The interior, with a single nave, preserves a majestic wooden altarpiece and a valuable group of painted wood sculptures, featuring the “Lamentation over the Dead Christ” by Andrea Fantoni (17th century). On the same square is the eighteenth-century chapel with an octagonal plan frescoed by Voltolini. Former cemetery church now dedicated to the Marian cult. In the hamlet of Cislano, before reaching Zone, the little church of San Giorgio, formerly parish church of Zone until the 16th century, is well worth a visit. Built in the fifteenth century, its outer wall has frescoes from 1400, including St. George on horseback killing the dragon. Continuing towards Zone, after about 500 meters, on the right, at the top of a ramp, there is the church of Saints Ippolito and Cassiano dating back to the fifteenth century. The facade has a cross vaulted pronaos.

NOT TO BE MISSED
The natural reserve of the Erosion Pyramids – Nowadays, the fame of Zone is mainly due to the presence of enormous land formations supporting large boulders in the locality of Cislano: the earth pyramids, resulting from a rare erosion phenomenon boasting few samples worldwide. Inside the reserve there is a path with explanatory signs allowing visitors to take a closer look at this unique natural monument. Distance time: 1h.

VIA FERRATA ROUTES AND CRAGS
Corno del Bene – The Via ferrata climbs the Corno del Bene rocky ridge on the Monte Guglielmo massif. Difficult, given the presence in the first section of a couple of challenging passages, the significant exposure may raise the degree of difficulty.
(Approach 2.00h – via ferrata 50 minutes – total gradient 1000 m- the via ferrata alone approx. 200 m)
Corna delle Capre – This via ferrata climbs the rock face of Corna delle Capre on the Monte Guglielmo massif in absolute verticality. Difficult given the verticality and a couple of single passages. Moderately difficult in the final section.
(Approach 1.00h – via ferrata 1h- via ferrata gradient approx. 230 m)
Crags Corna delle Capre – The Corna delle Capre is a beautiful rock face. Though the routes are not well developed (around 100 metres), they are very physical and sheer and therefore require good resistance. On the wall there are about ten itineraries, with homogeneous difficulty from 6a to 6b.

HOW TO GET THERE
By bus – From the train station of Marone, a daily service leads to the town of Zone. Info and timetables: Autonoleggi Bonomi


Sport and nature in Zone

You will start climbing to Zone from Colpiano, turning into a path that seems to take directly to th...

After leaving the village northwards and going beyond the cemetery, the Antica Strada Valeriana turn...

Simple circular route suitable for everyone, very pleasant in all seasons, particularly fascinating ...

Trekking from Zone to Corna Trentapassi

Spectacular itinerary that allows you to admire Lake Iseo, Camonica Valley and the top of Monte Gugl...

Inaugurated in 1984, it is named after the particular shape that the deposit of glacial sand, boulde...

“The funny figures of the gnomes suddenly appear alongside the path, they are not frightened b...

This recently built iron path climbs the rocky ridge to the Corna delle Capre in the Monte Guglielmo...

This recently built via ferrata climbs the rocky ridge along the Corno del Bene in the Monte Gugliel...

The pyramids of Zone are one of the most enchanting expression of nature in this area. Inaugurated i...

The Corna delle Capre cliff is a great rockface. Though the routes are not well developed (around 10...

Located in a scenographic position in the upper part of the town, the parish church of San Giovanni ...

The chapel is located next to the parish church, inside the old cemetery, and took shape towards the...

The church is part of those charitable settlements which were widespread in the Middle Ages and loca...

Church of San Giorgio in Cislano

Before reaching Zone from the road that goes up from Marone, on a terrace of fluvioglacial origin, w...

Church of Sant’Antonio Abate in Cusato

The church was rebuilt in the 16th Century over a previous chapel and consists of a single central a...

The Footsteps of the Archosaurs

It is possible to discover how the ancestors of dinosaurs and crocodiles, the archosaurs, walked in ...

Monument to the Redeemer

The monument dominates the summit of Mount Guglielmo at approximately 1950 metres of altitude, inten...

Ostello Trentapassi – Ristorante Pizzeria La Lucciola is located in Zone. In the structure the...

Hotel Piramidi is situated in an enchanting position, on the slopes of the mountain Monte Guglielmo....

The small village of Zone is situated on the slopes of Mount Guglielmo, a village with rich and anti...

Casa zia Adry is 8km from lake Iseo, located in the center of the village, next to the bakery, pharm...

La Piazza is situated near the “Piramidi di Zone” Nature Reserve. Family-run, it is a sm...

Our Bed and Breakfast is situated in the historical centre of Zone. At an altitude of 700 metres and...

Refreshment and tranquillity place before embarking on the path that, between the huts, leads to the...

Rifugio Almici on Mount Guglielmo, in province of Brescia, is a family-run hut, open from May to Oct...

Thanks to the great passion for horses and for nature, the Bonsi family manages the Val Tress restau...

Our holiday village has 30 bungalows suitable both for Summer and for Winter. They have equipped kit...

The reasons that can push a person to choose a few days or an entire vacation that most approaches t...

Conca Verde is a small family-run hotel, which was renowned in 2006. It has 28 large and fully equip...

The ancient post-stage for stagecoaches is now the modern Almici hotel, situated in the most peacefu...

Where to eat in Zone

List of restaurants in Zone, where it is possible tasting delicious local dishes:   Agriturismo...