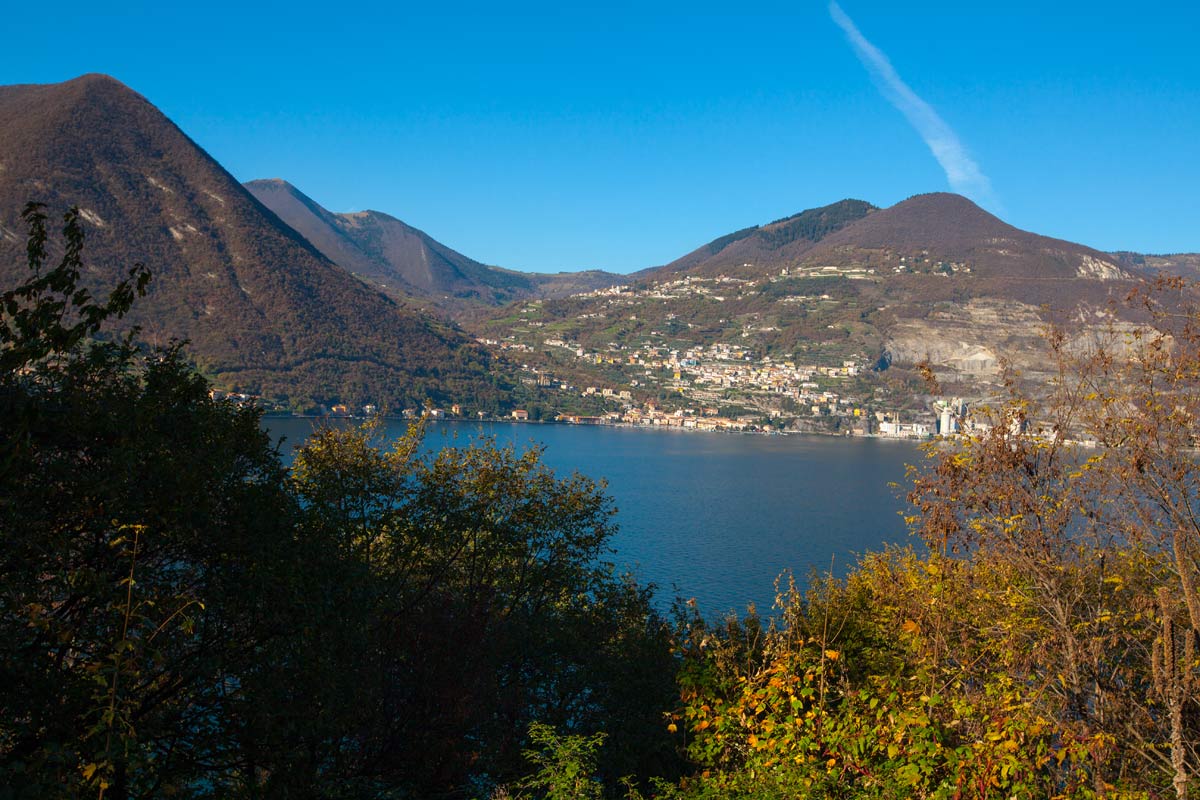 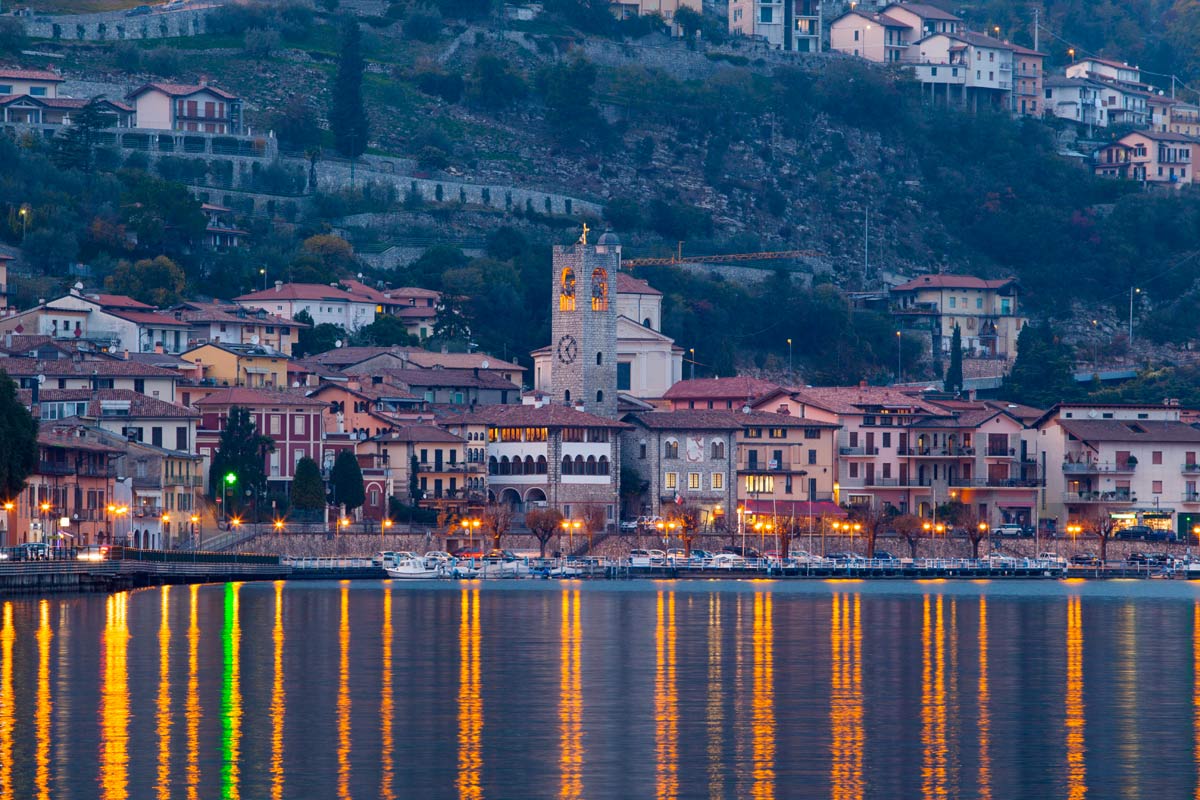 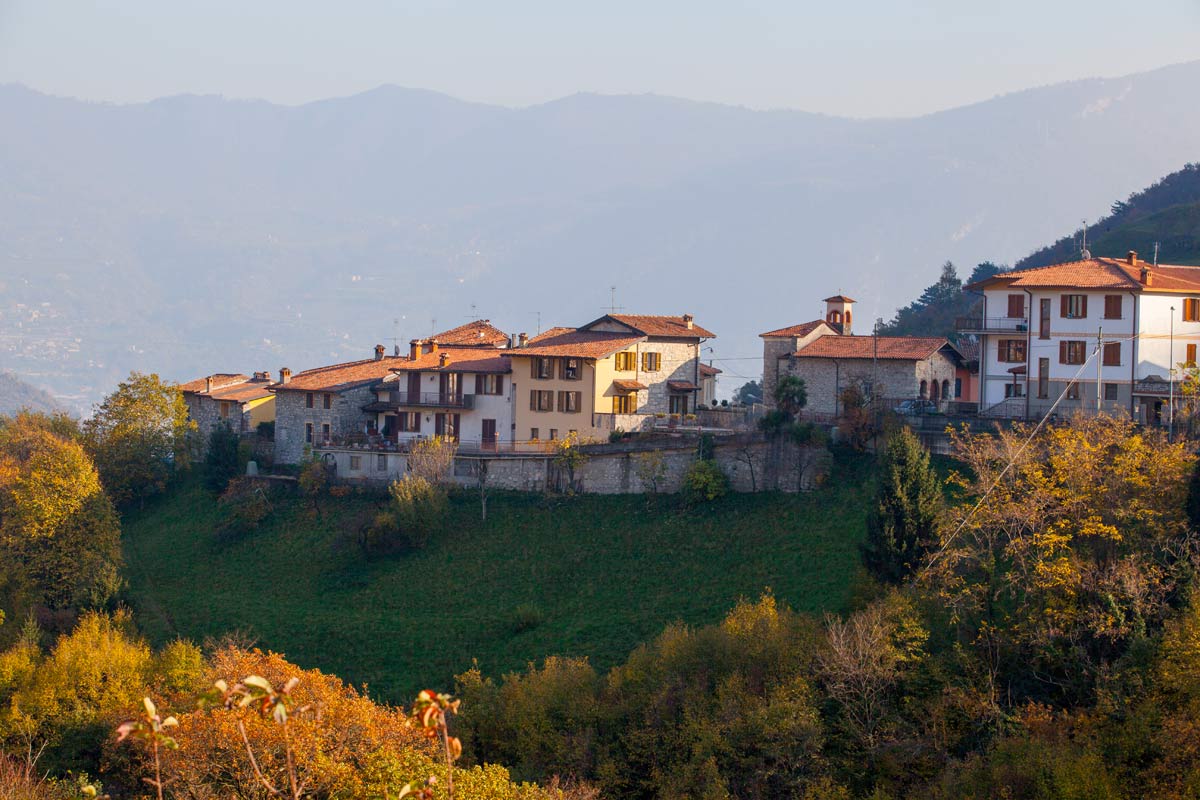 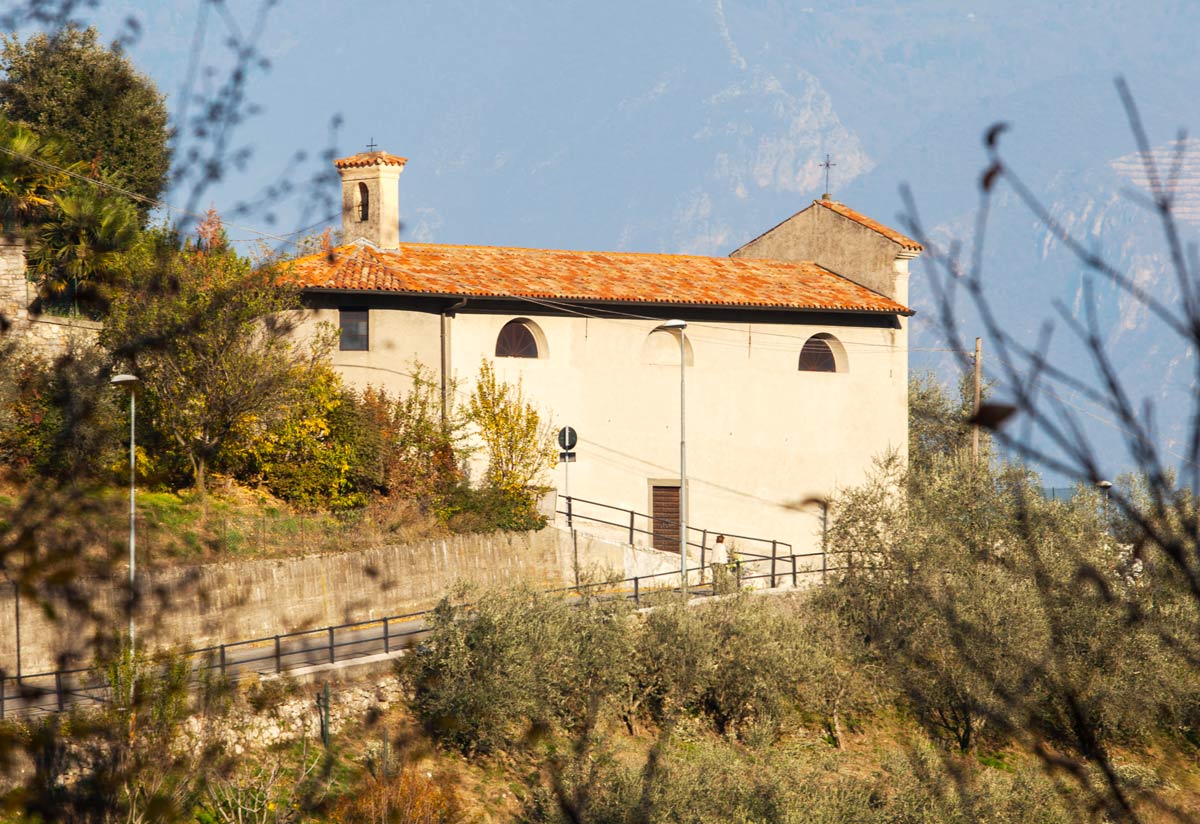 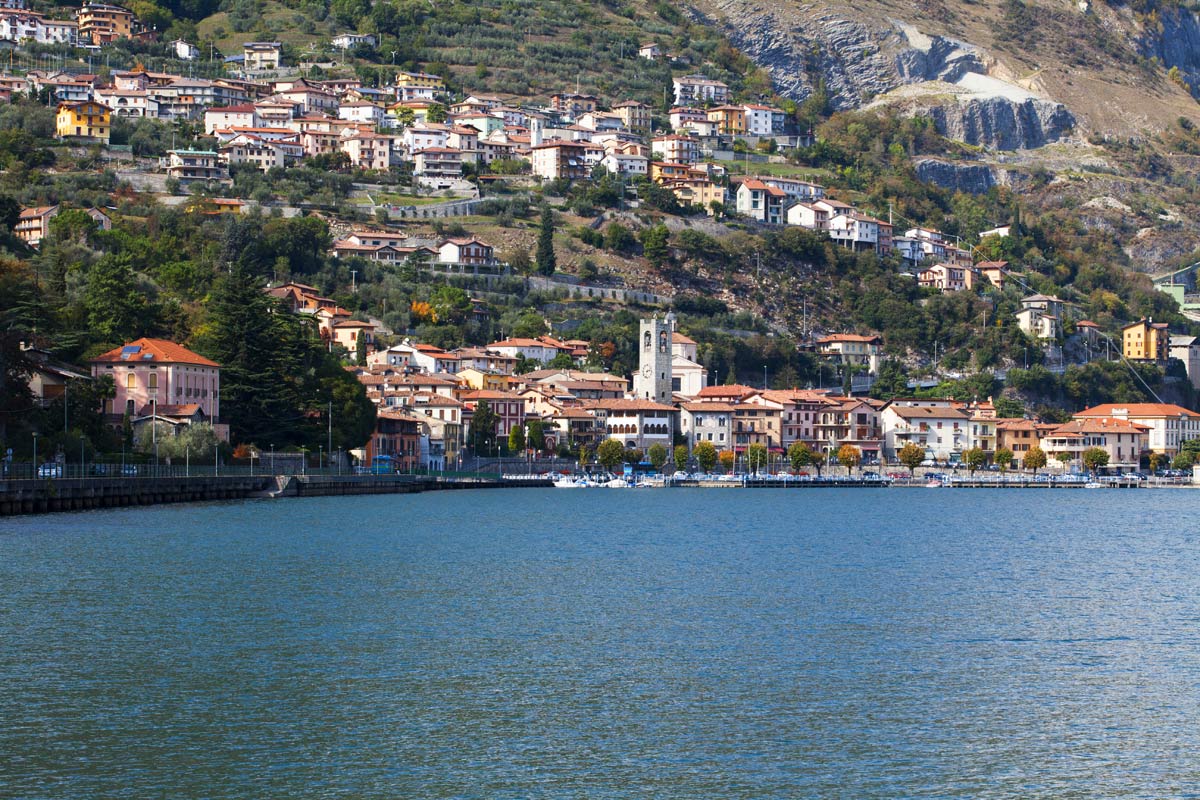 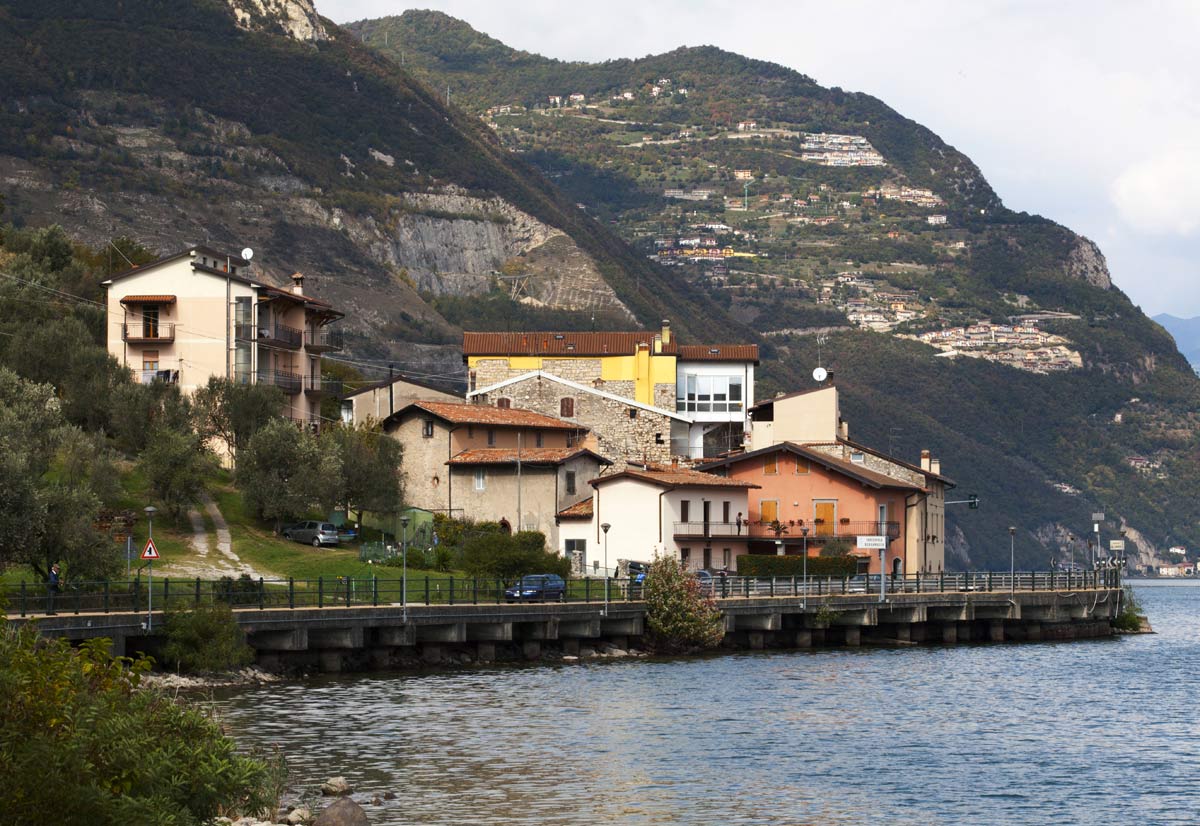 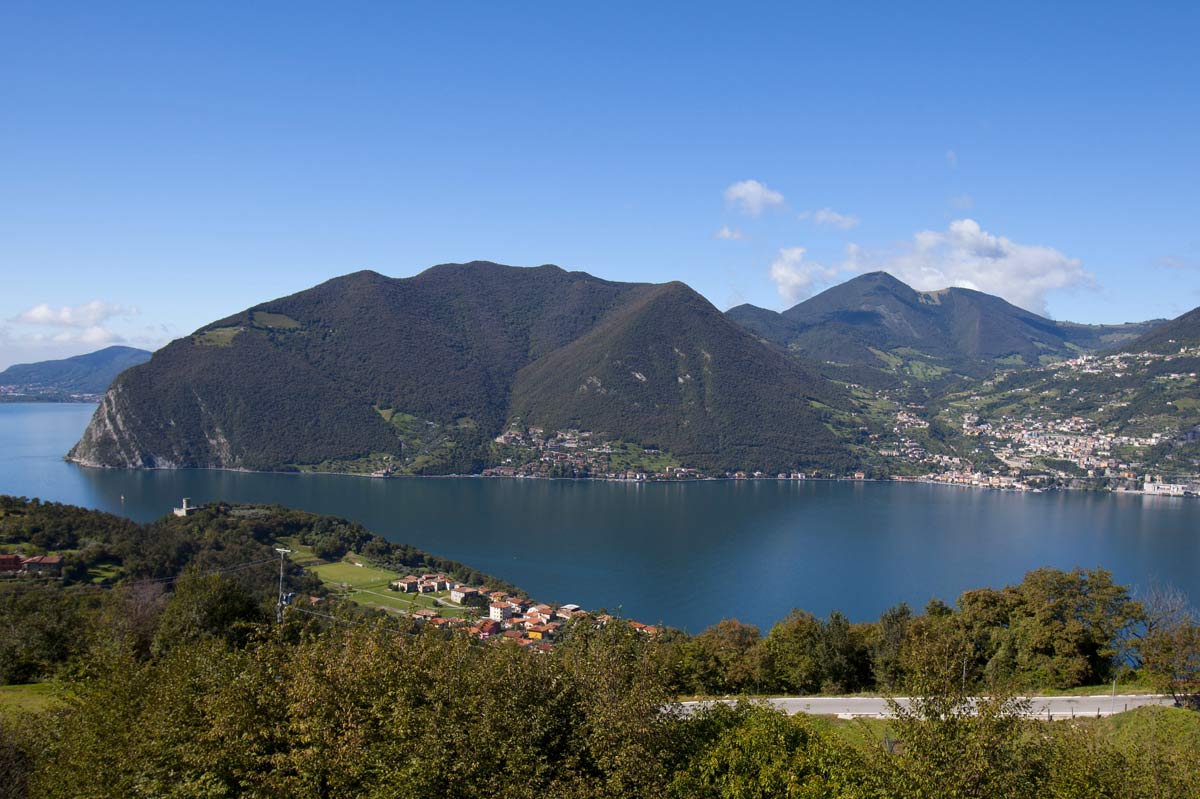 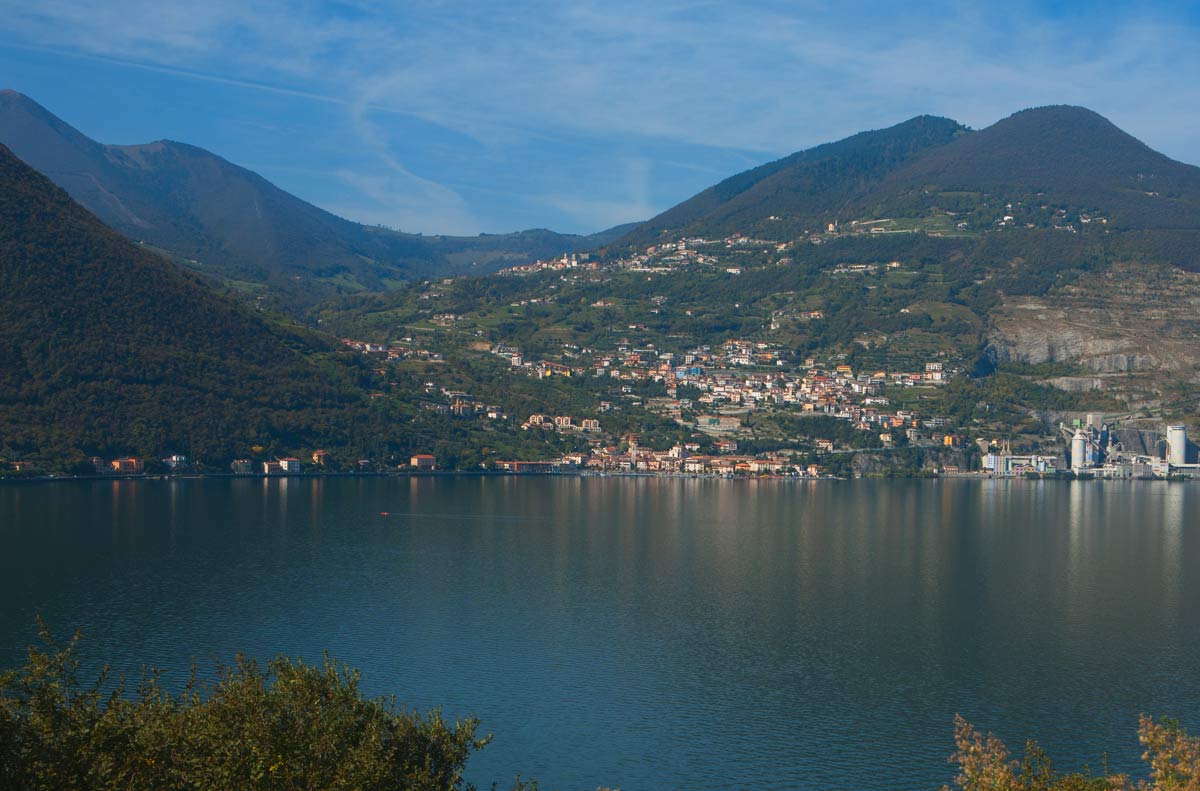 On the western coastal road, ten minutes by car from Sarnico, after a couple of tunnels alternating with stretches of coastline with inlets and beaches, lies Tavernola Bergamasca with its pretty lakeside promenade. A terrace overlooking the port, on the opposite side of the road, leads to the old town, which stretches against the hill.

Once in Tavernola, the clock tower or Torre dei Fenaroli from the 14th century catches the eye, the only well-preserved building of the ancient medieval fortification, which was later raised and transformed into a bell tower. The rest has been lost over the centuries, especially in 1906 when a portion of the delta on which the village is built slid into the lake. From the tower it is possible to reach the historical centre where is located the parish church of Santa Maria Maddalena, built on the ruins of the castle. Inside, in Baroque style, there is a marble altar and paintings of the ‘500 – ‘600. A steep stone pedestrian road leads to the 13th century Romanesque parish church of San Pietro, where it is possible to admire frescoes by Romanino. Also worth mentioning is Villa Fenaroli which, dating back to the sixteenth century, has a large botanical park.

NOT TO BE MISSED
Frescoes by Romanino – At the beginning of the second decade of the 16th century, Romanino painted two wall paintings in the Romanesque parish church of San Pietro. The first, on the left wall of the presbytery, appears to the visitor as a large choral scene with the Virgin at the top, in the centre, between St. George and St. Maurice. On the lower register, Saints Peter and Paul complete the representation. The second painting, located at the top of the counter-façade, is an unfinished work, later covered with a layer of white plaster, under which, however, you can recognise a few fragments related to a Crucifixion.
Black cherry cake –  Don’t forget to try the typical cake, made with short pastry and black cherries, in the village bakeries!

TOURS AND EXCURSIONS
Monte Isola – An excursion to Monte Isola, located right in front of Tavernola, is a must. The island can also be reached by boat in winter. Info and timetable: Navigazione Lago d’Iseo
Walk in Cambianica – A walk leading to the hamlet of Cambianica, an ancient medieval centre on a hillside; here there is the Romanesque church of S. Michele, known as San Michelone with internal and external frescoes; anyone wishing to do so can continue to the sanctuary of Cortinica, a temple created to commemorate the escape from the threatening plague of the 17th century, and then descend first to the church of S. Pietro and then along the promenade.
Walk in Gallinarga – Another pleasant walk is the one towards the hamlet of Gallinarga, a group of ancient houses, where it is interesting to visit the little church of S. Giorgio; it is advisable to reach the hamlet by taking a footpath halfway up the hill and then by via Moia.


Sport and nature in Tavernola Bergamasca

Leave the first car in via Roma, in the municipal parking on the lake behind La Sirena restaurant. W...

Take the provincial road for Vigolo for 100 m. from the parish church of Tavernola. Climb a short st...

The first stretch of the path crosses Gallinarga locality (200 m.), a hamlet of the town of Tavernol...

There are testimonies dating back to the 15th Century of a first church demolished in 1749 to make ...

The Romanesque origin of St. Peter, parish church of Tavernola until 1570, can only be inferred by s...

Church of San Michele in Cambianica

The church of San Michele (St. Michael), also known as St. Michelone, is a marvellous example of ada...

Church of San Giorgio in Gallinarga

The Church of San Giorgio is located upstream of the Gallinarga locality, in the center of an olive ...

This shrine was erected to commemorate the protection of Madonna during the plague in the XVII centu...

Tavernola preserves a fair quality series of mural paintings in the village churches and façades. T...

The village of Tavernola preserves few medieval ruins due to a hydrogeological instability event in ...

The tower and the old town centre

The tower of the ancient Fenaroli castle still exists, but it was transformed in a bell tower. The ...

The historic centre of Tavernola

Tavernola stands in the centre of the western shore of Sebino: the historic centre unfolds along th...

Large and bright 80 square meter apartment in an elegant 19th century villa in the private park of t...

Casa Iseo is a luxury apartment with a large terrace and privacy. It has 3 bedrooms, 1 bathroom and ...

Casa Moia is a luxury holiday home located in Tavernola Bergamasca. The structure, furnished in a mo...

In the hills just five minutes from the lake, Casa Magotina offers an incomparable view of Lake Iseo...

Casa Al Gatto Rosso is a charming double room flat in a old farmhouse, with panoramic views on the l...

Part of the ancient Fenaroli Castle, il B&B offers a lake-view room and a park-view room, both w...

The accommodation, located in a quiet and typical medieval village, is a cozy two-room apartment wit...

Holiday Home on the Lake

The Holiday Home on the Lake project is a result of our love for our land, the desire to plunge in t...

The Osteria Curtif is a typical local tavern that offers homemade cooking and produces olive oil. In...

Surrounded by greenery at just 100 metres from the lake shore, this B&B has a kitchen for breakf...

Where to eat in Tavernola Bergamasca

List of restaurants, pizzerias and trattorias in Tavernola, where it is possible tasting delicious l...