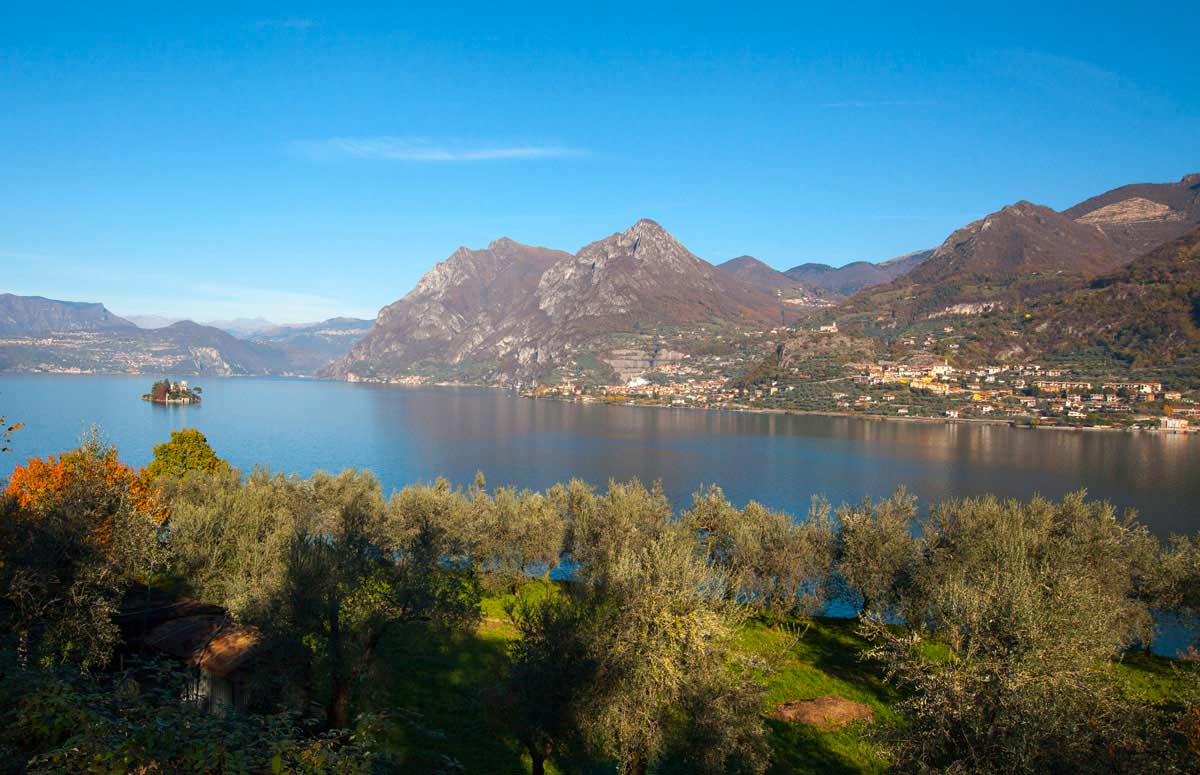 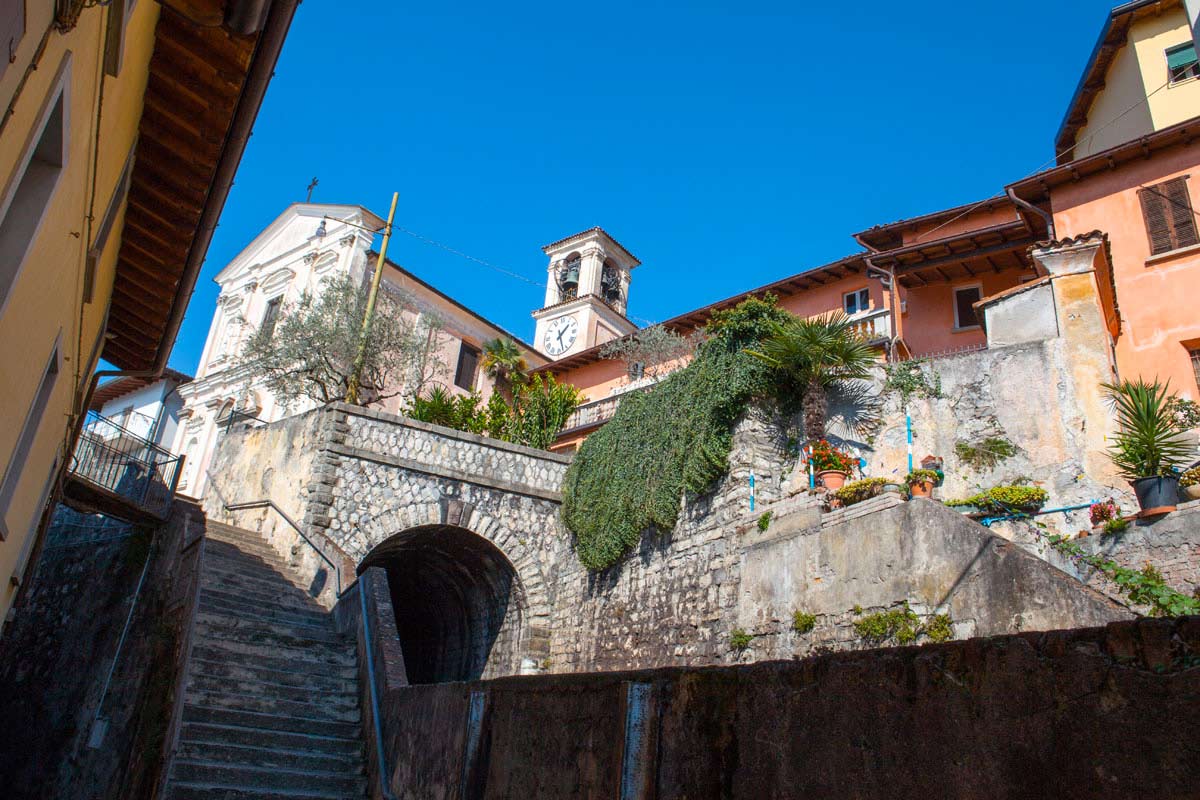 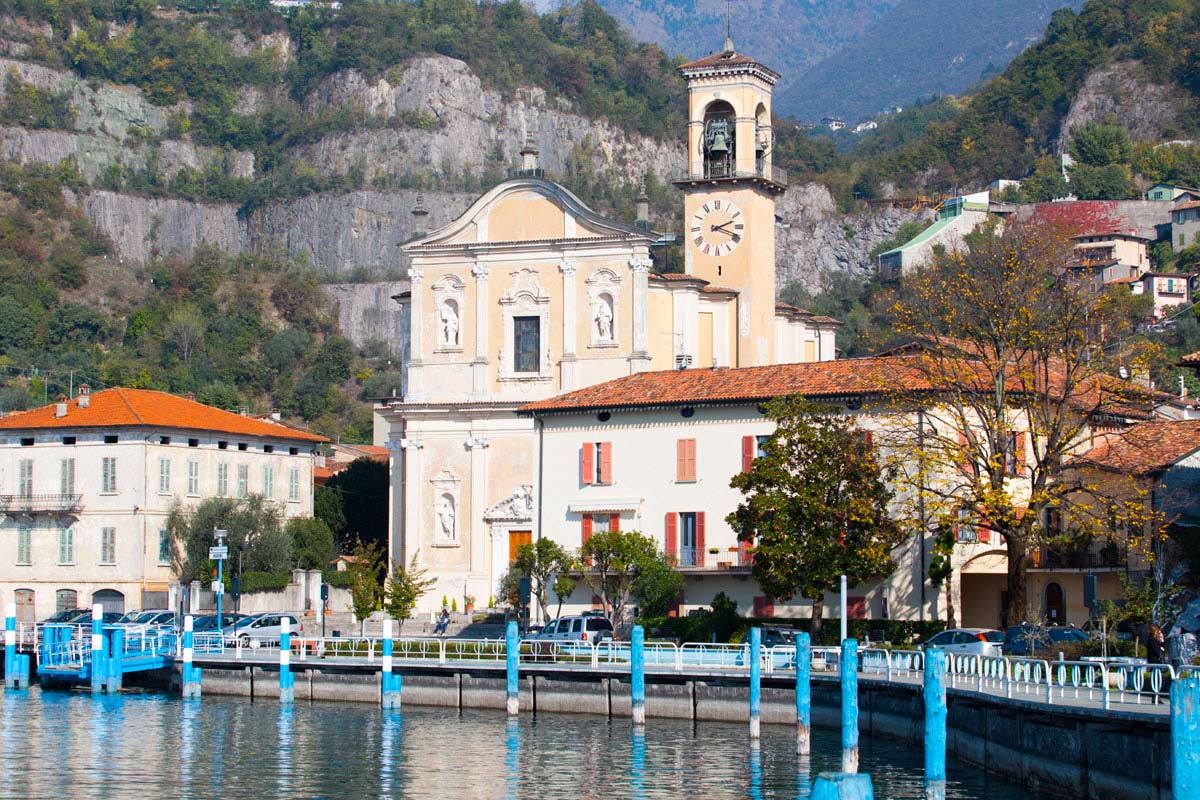 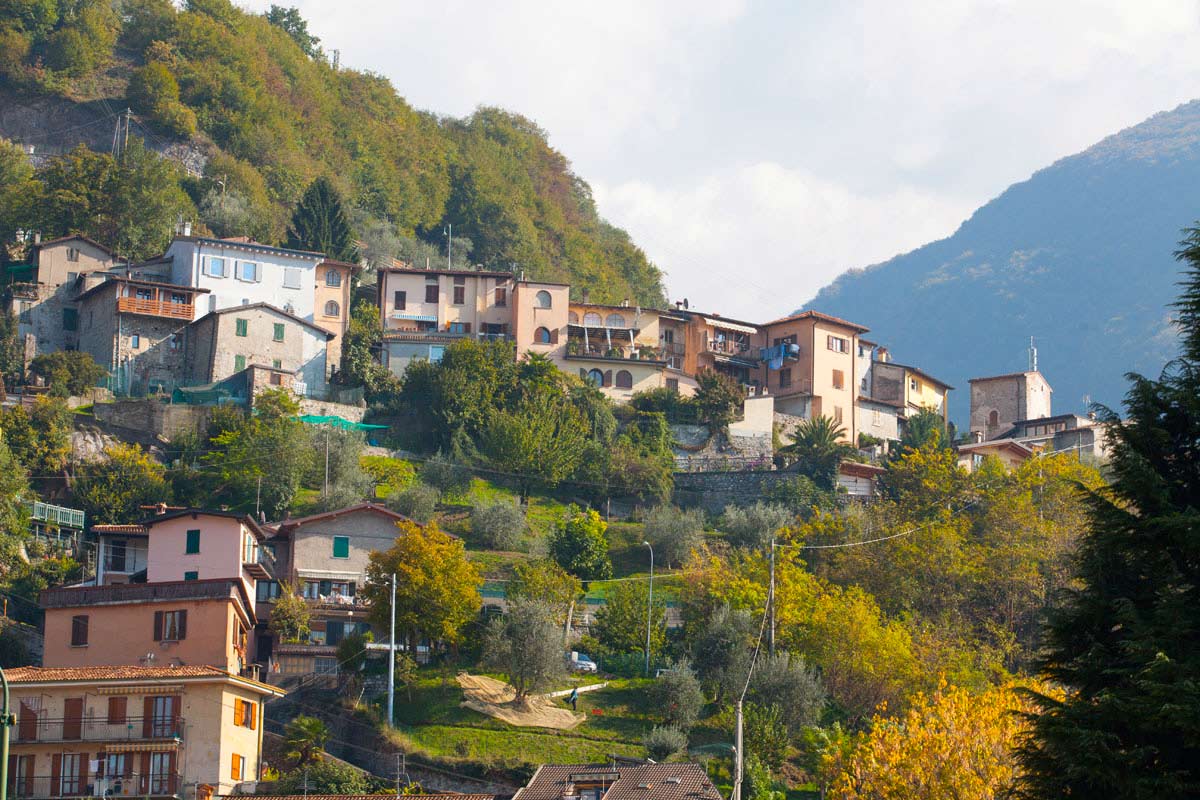 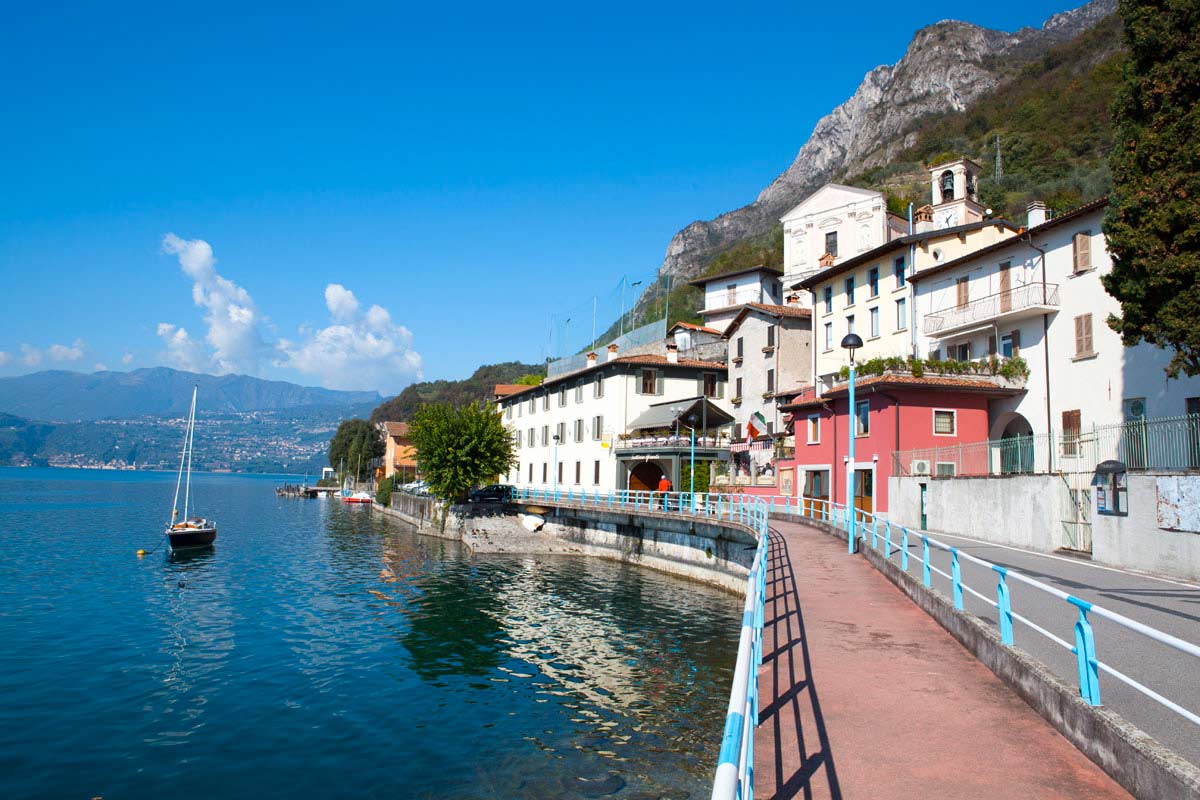 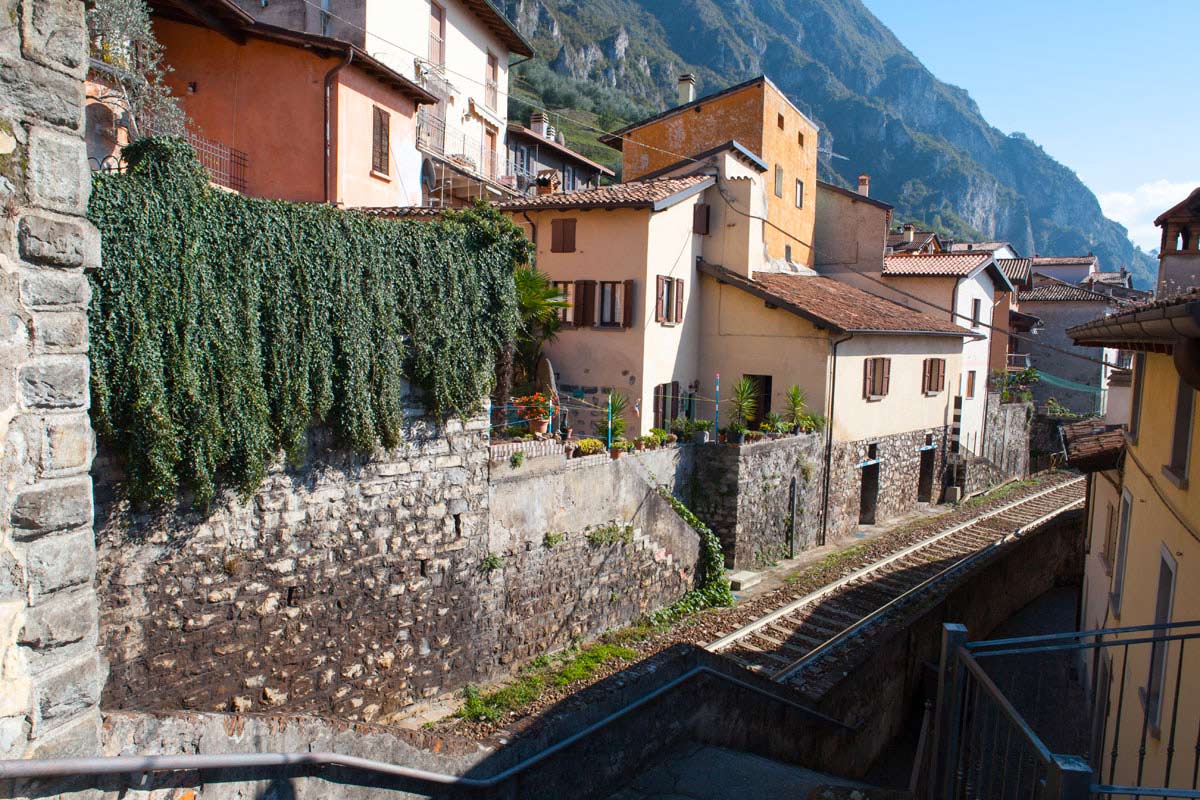 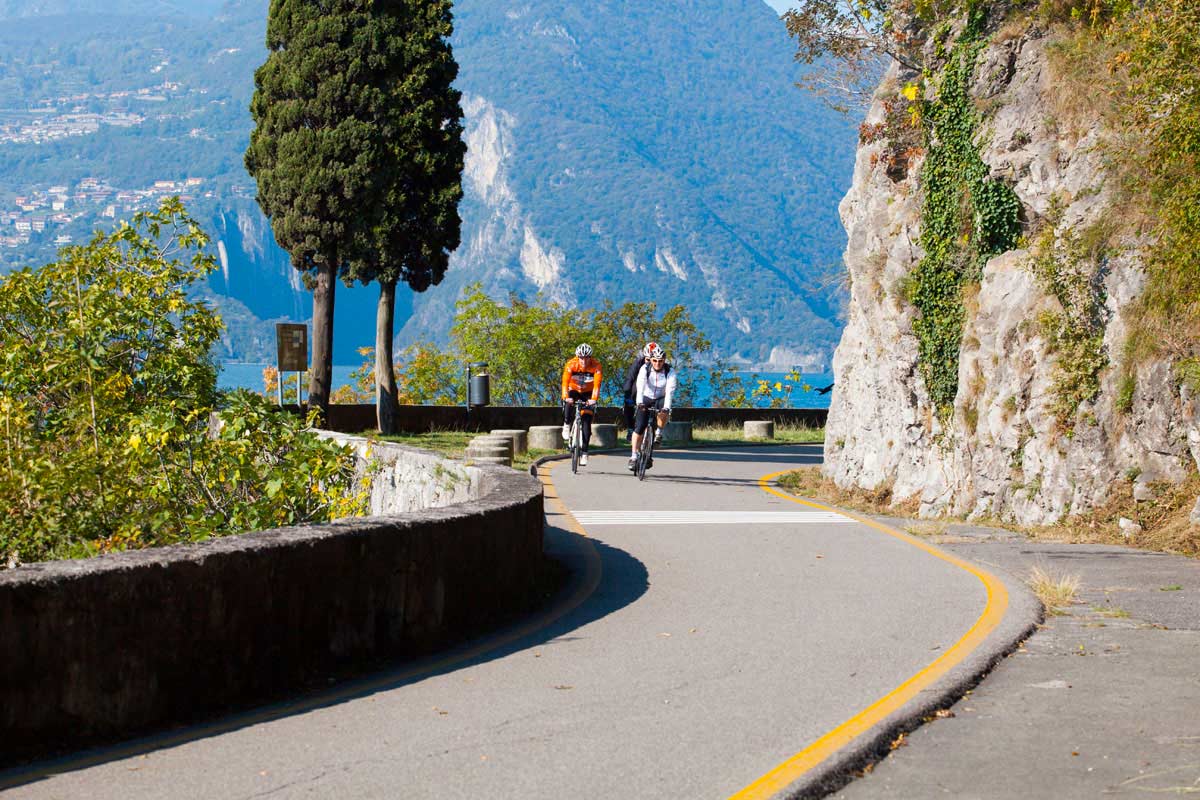 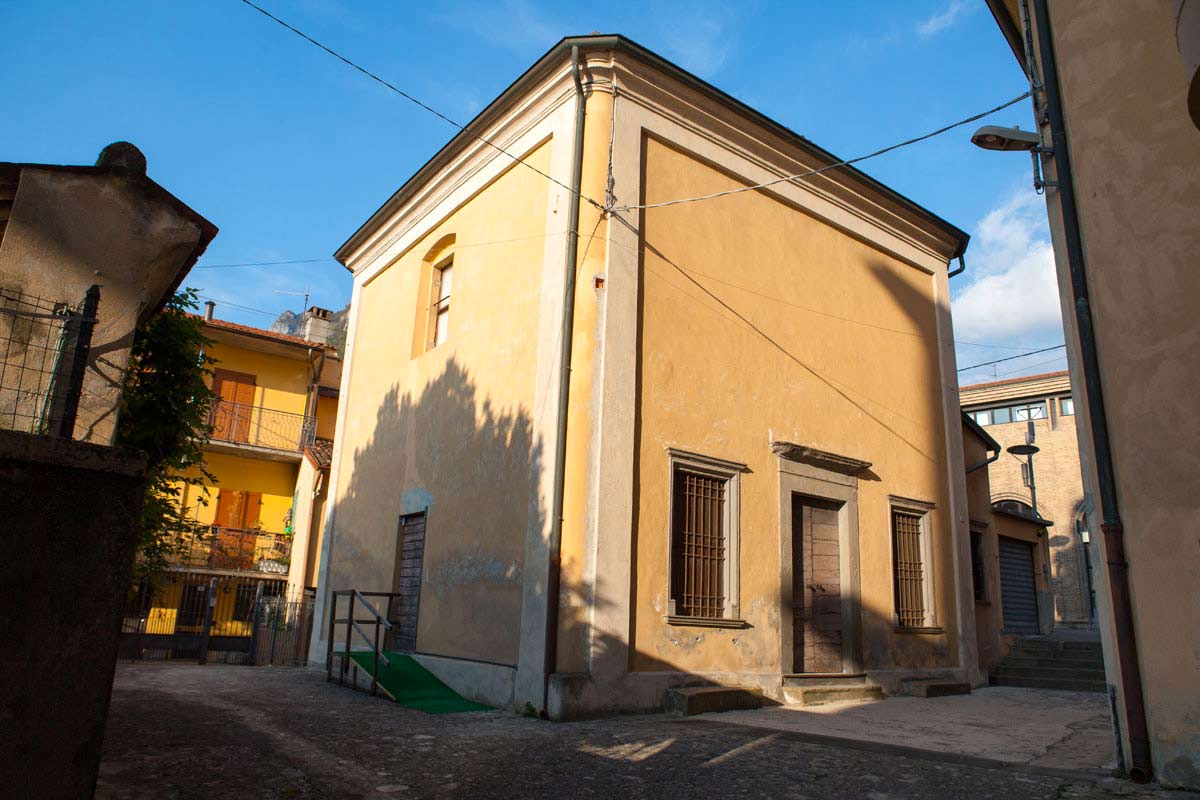 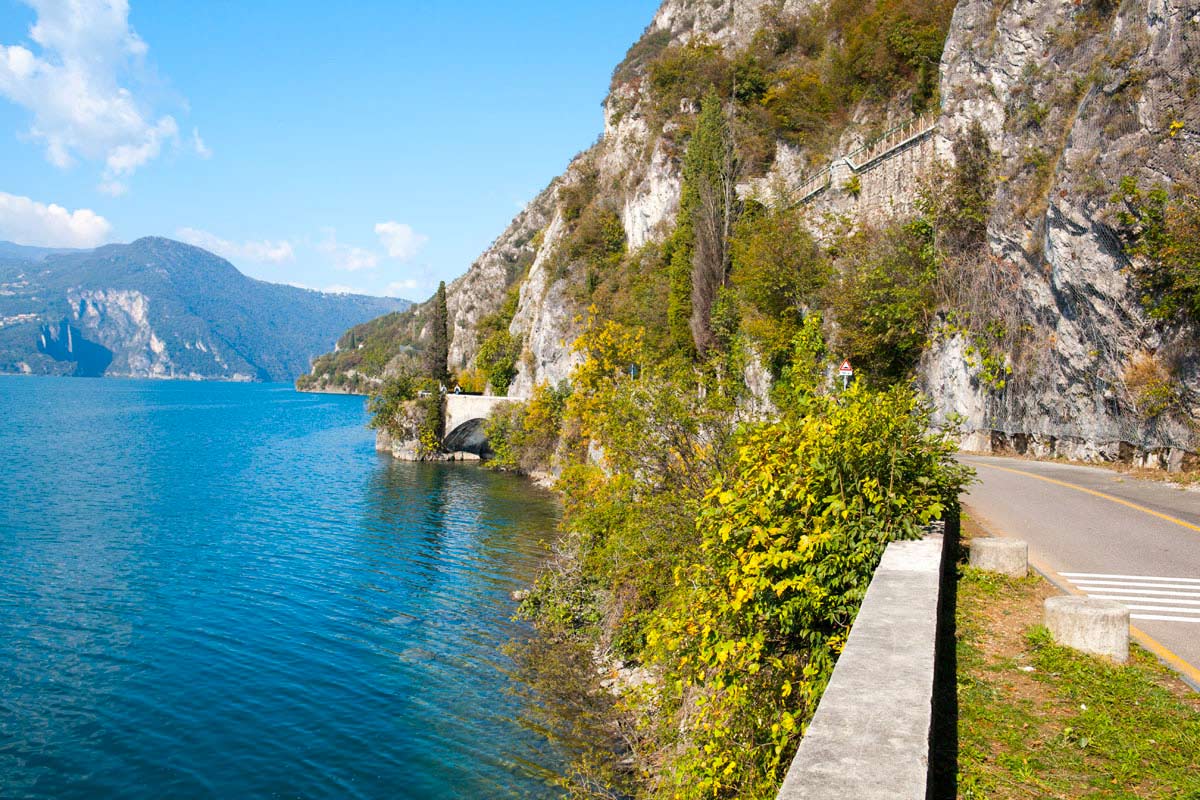 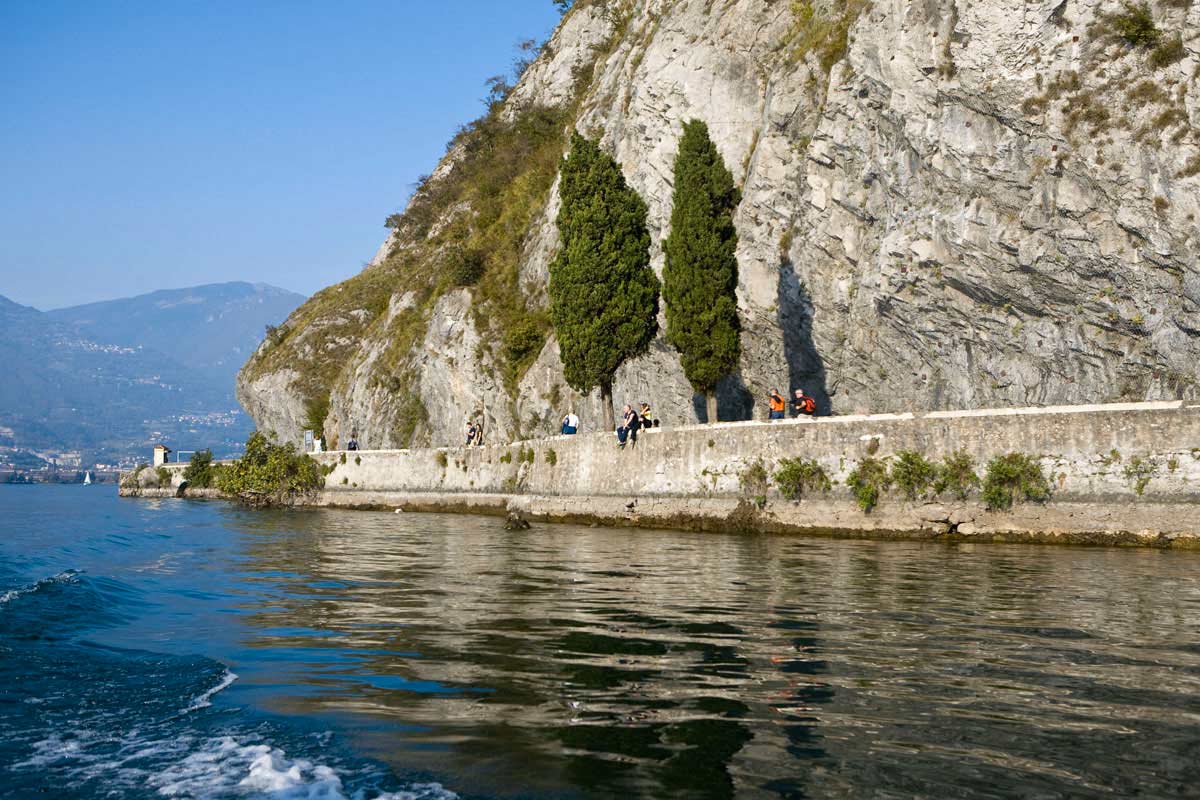 Halfway between Iseo and Pisogne, lies on the lake the town of Marone. Known in the nineteenth century as an important wool production site and more specifically of felt, today Marone is mainly renowned for its olive groves, which has earned it the name “City of Oil“.
Marone is also the ideal place for hikes and mountain bike rides , along the many trails that from the center ascend to the Croce di Marone and Monte Guglielmo.

SIGHT SEEING ATTRACTIONS
Marone also has a wealth of historical evidence: the remains of a 1st century AD Roman villa can be found in “Cò de Hela”, along the railway line. The ancient parish church of San Pietro in Vinculis (15th century) located on a rocky spur where once stood a fortress. Along the road to Zone, towards Passo Croce di Marone, the sanctuary of Madonna della Rota (15th century) with frescoes by Giovanni da Marone is well worth a visit. Worthy of note is also the eighteenth-century parish church of San Martino di Tours, with numerous frescoes by Voltolini.
The hamlet of Vello belongs to the municipality of Marone which stretches in a single road between the lake and the hill. The town was built around the new parish church dedicated to Santa Eufemia, home to a 1642 painting by Ottavio Amigoni. At the entrance of the village stands the ancient fifteenth-century parish church, now known as the Church of the Dead for its proximity to the cemetery, which preserves frescoes attributed to Giovanni da Marone.

SPORTS
Besides trekking and mountain biking, Marone is the right destination for rock climbing lovers, thanks to the many cliffs in Madonna della Rota and for windsurfing, kitesurfing and wakeboarding enthusiasts, thanks to the constant wind blowing throughout the day in the hamlet of Vello.

TOURS AND EXCURSIONS
Trekking – From the town centre it is possible to take several walks in the surrounding mountains: reaching the hamlet of Colpiano and enter the Ancient Valerian Road; taking the staircase alongside the Via Crucis holy shrines to visit the church of San Pietro; and for the more willing, going up the path leading from the railway station to the Pyramids of Zone (1h15 ) or to the Cross of Marone (2h), and to the top of Monte Guglielmo (4h). In Vello, with good training, a vertical kilometre leads to the top of Corna Trentapassi.
Boat trip – During summer, from the port of Marone, leave two lake tours, one to the north (to visit the beautiful towns of Lovere or Pisogne) and one to the south (to visit Monte Isola, Iseo or Sarnico).

NOT TO BE MISSED
The Vello-Toline cycle path – The old coastal road carved into the rock has been transformed into a beautiful and panoramic trail, to be covered on foot or by bicycle. The trail is located directly on the lake and away from motor vehicles, and is very popular amongst locals and tourists alike for sports and leisure activities. (there and back 10 km)

HOW TO GET THERE
By train – Marone, like all the towns on the eastern shore of the lake, is served by the regional line Brescia-Iseo-Edolo. The train station is located in the historic centre, a few minutes walk from the pier. Info and timetables: Trenord
By bus – The town is also served by buses with the main stop in Via Roma, near the parish church. Info and timetables: FNM Autoservizi


Sport and nature in Marone

You will start climbing to Zone from Colpiano, turning into a path that seems to take directly to th...

The path begins with a moderate climb that develops along the continuation of the road. Near the fir...

Walk on the cycle-pedestrian path between Vello and Toline

The cycle-pedestrian between Vello (Marone) and Toline (Pisogne) represents a simple but very sugges...

The Oil Road (Strada dell’Olio) is a 13-kilometre itinerary within the municipality of Marone....

Trekking from Vello to Corna Trentapassi

Ring route recommended for expert hikers that allows visitors to reach the Corna Trentapassi from th...

Cycle-pedestrian path between Vello and Toline

The cycle-pedestrian path between Vello (Marone) and Toline (Pisogne) represents a simple but very s...

The Pyramids of Zone and Mount Guglielmo

This track, which requires good training, starts from Marone, where you can park your car near the T...

One of the most recent equipped cliffs in Val dell’Opol in an area abounding with meadows, woods a...

An enormous stone arch that can be seen clearly from the road overlooking the large cliff face. This...

Nice structure with yellow and black striping from which it takes its name “Sass Striat”, now Te...

Reduced approach, high level climb and breathtaking panorama: this cliff is an outdoor rock gym with...

The Marone cliff is the first encountered in climbing the mountain. Friction with the owners of the ...

The parish church of Marone overlooks the lake and is preceded by a large churchyard that once desce...

Collepiano, a hamlet in the Eastern part of the municipality of Marone, is located in a hilly area o...

The church of Santi Pietro e Paolo (Saints Peter and Paul) in Pregasso, in the municipality of Maron...

Church of Sant’Eufemia in Vello

The small village of Vello develops following the natural course of the lake coast North of the town...

At the southern limit of the territory of Vello, Sant’Eufemia is known as the Church of the de...

The Shrine of the Madonna della Rota is located at a height of 600 m above sea level surrounded by l...

The restored structures on the outskirts of Marone, in the district called Cò de Hela (that means...

The municipality of Marone, located in the middle of the eastern shore at the mouth of the Opol and ...

The village of Vesto (municipality of Marone) is located on the hillside, further south and at a low...

Iseo Guide is a group of qualified tourism professionals who have decided to combine their skills in...

The farmhouse Carai is a gorgeous house which has been recently renovated to very high standards. It...

The only prestigious Art Nouveau structure born in the early 1800s, recently renovated without disto...

The property is located in an old spinning mill completely renovated in the 1980s, located right on ...

Casatragliulivi is a splendid apartment immersed in the green of olive trees and with a breathtaking...

Casa Lory, in the little village of Vello di Marone, is located near a 4-kilometre length cycle path...

This 2-bedroom flat is located in a very quite residential building waterfront with a private pool a...

The apartment is situated in the historical centre of Vello di Marone and it can be the best solutio...

La Casa Sul Lago offers accommodation in Marone, on the shore of lake Iseo, a 17-minute drive from I...

Apartment Nest on the Lake

This elegant open space flat is located in the little fishing village of Vello di Marone on lake Ise...

Set in a quiet street, away from the traffic, it’s a comfy attic with a lake-view balcony. It is c...

Rifugio Croce di Marone can be reached by car, on foot and on mountain bikes from Marone, Zone and S...

Activity open from May 31st, 2020 Cascina Lert offers a restaurant with a large lounge and tables in...

Enjoying the peace of Lake Iseo, the farmhouse overlooks its shores from the hills above, with a uni...

The campsite has 36 grass pitches, 22 of them overlooking the lake, an opportunity for few people th...

Little tourist village with family management, situated in a quiet location on the shores of lake Is...

Located in Marone, this apartment is 33 km from Bergamo. Guests benefit from a balcony. Free private...

Delightful apartment in Marone with breathtaking views of Lake Iseo. The structure is spread over 2 ...

The house is on two floors and can accommodate up to 22 people. Upstairs there are four rooms with b...

Villa Serioli is just 50 meters from the pier, from which guests can make boat trips across the lake...

B&B Casa Caterina is located in the town of Marone, within walking distance from Lake Iseo’...

Where to eat in Marone

List of restaurants, pizzerias and trattorias in Marone:   Agriturismo Cascina Lert Via Zone, 1...