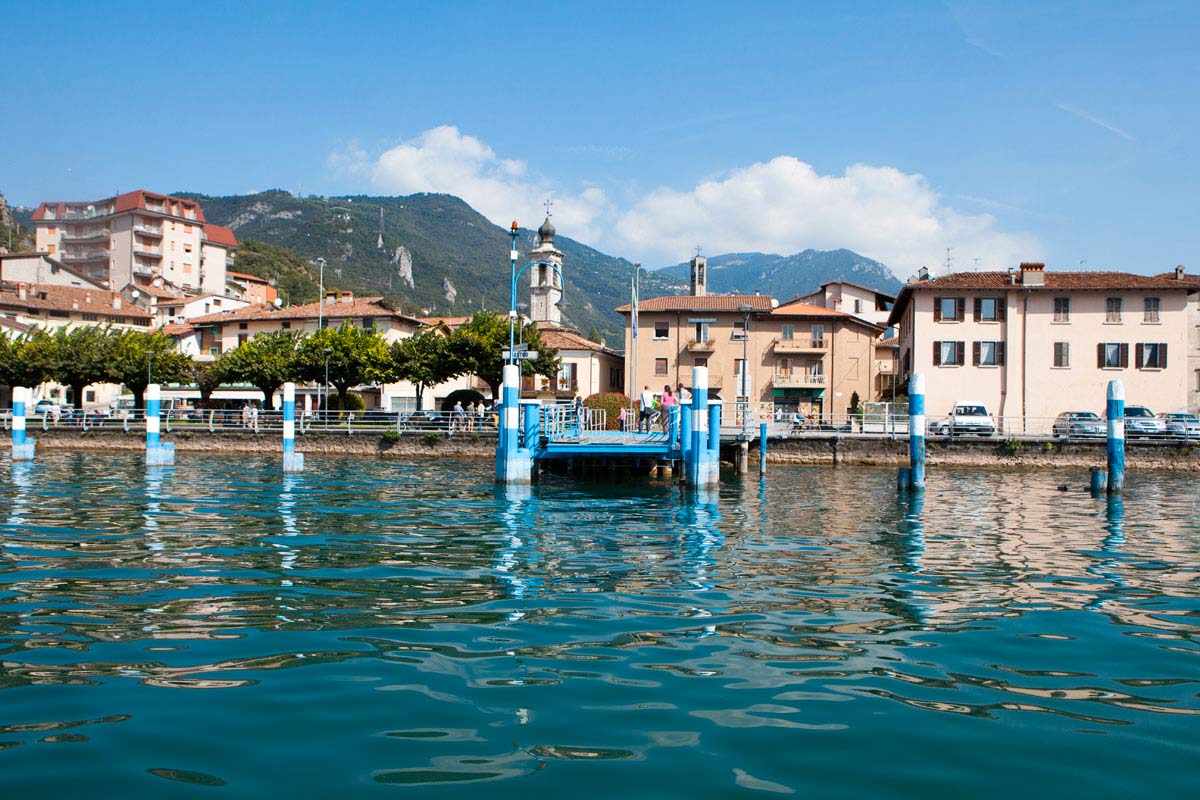 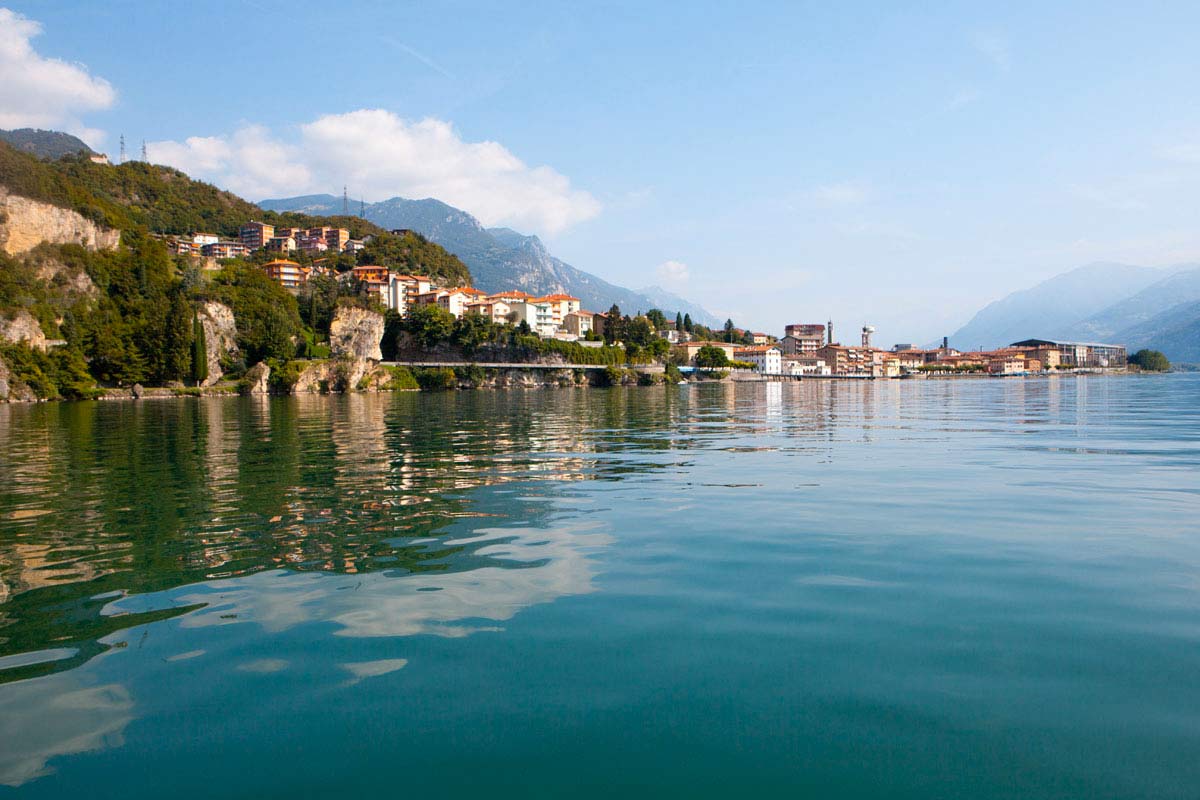 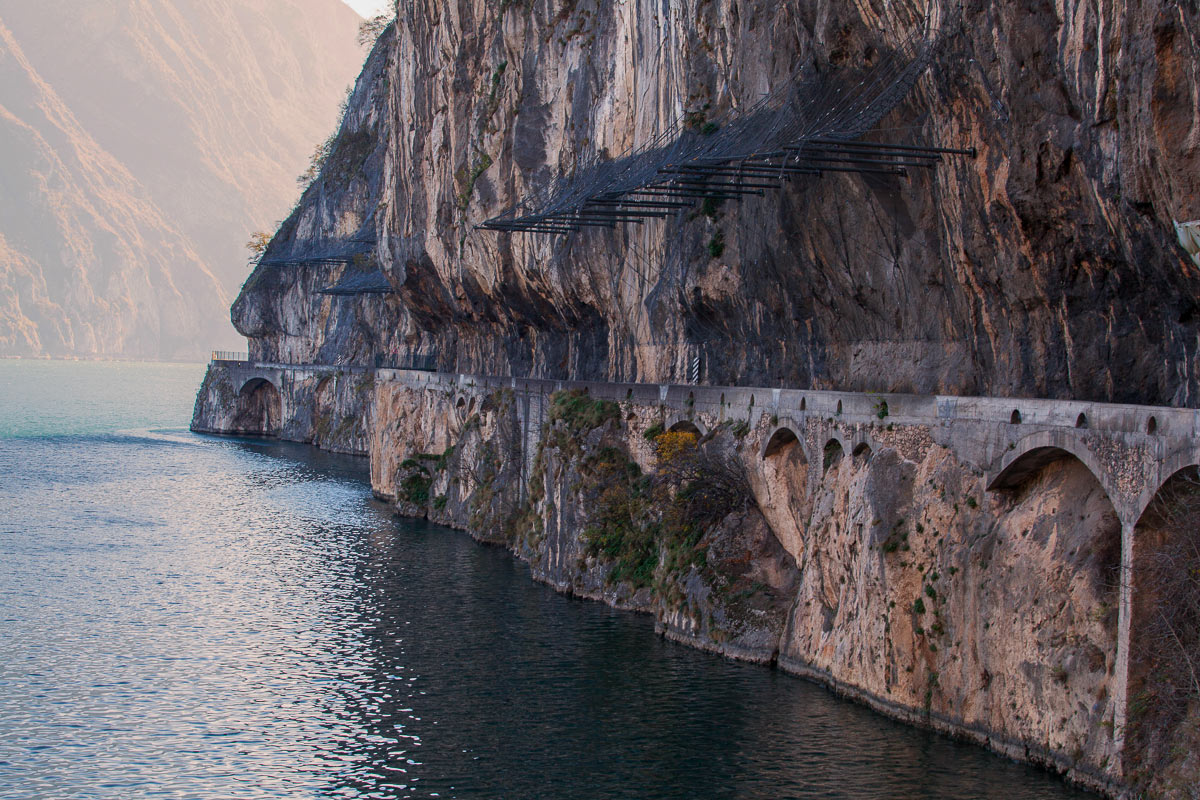 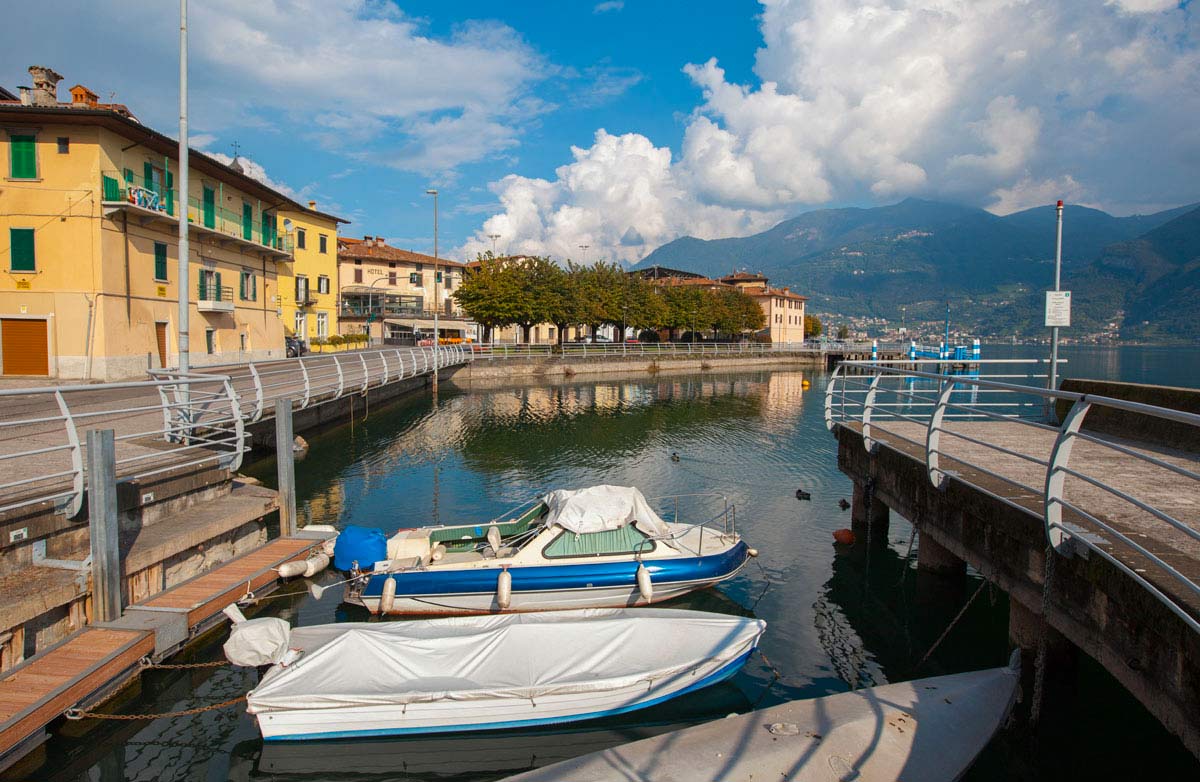 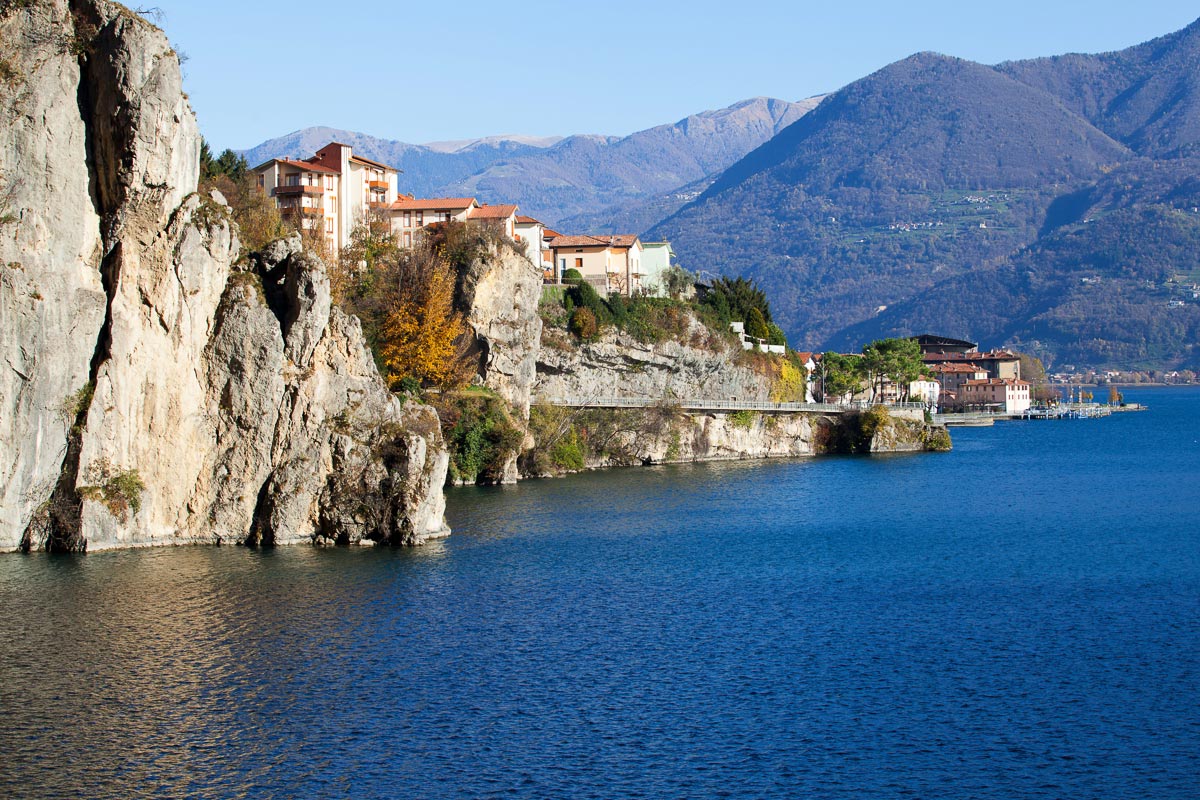 As the name clearly indicates, the origin of the village of Castro dates back to the Roman period. The ancient fortified village was built on the remains of a fortress destroyed in 1437, where it is still possible to admire a beautiful protoromanesque temple.

Although the village has had a subsequent development on the lake, where there is also the beautiful promenade, the true historic centre is located at Rocca with the church of S. Lorenzo, in a quiet and scenic location where on the 10th of August is celebrated the feast of the Patron Saint.
Following the coastal road, we arrive at the bridge under which the Tinazzo torrent enters the lake. There is a terrace on the lake with maritime pines, some benches to enjoy the beautiful view and, on a stand, a bronze book with verses by the poet Raul Montanari, originally from Castro.

NOT TO BE MISSED
The Littoral road – Built overhanging the lake, the road leading to Sarnico is a popular destination for photographers and lovers for the hues and colours that the waters of the lake assume.
Tinazzo gorge park – Extending over a surface area of more than 20,000 m2, the park offers the visitor a suggestive interest in flora and vegetation, due to its intricate morphology, the local climate and the nature of the rock which it is made of. Two enormous cliffs over 40 metres high, serve as wings at the entrance of the gorge along which hundreds of millions of cubic metres of sand and rock reached the lake transported by the impetuous force of the Borlezza torrent.


Sport and nature in Castro

Stroll from Castro to the Church of San Lorenzo

Easy walk from the center of Castro to the Church of San Lorenzo; a balcony overlooking Lake Iseo....

The trail begins near the Cappella del Colet in Castro, where you first take the Sentiero Agrituris...

Recommended itinerary to reach the Church of S. Defendente in Solto Collina, starting from Castro. I...

The site is currently closed to visitors.   Extending over a surface area of more than 20,000 m...

The site is located in the eastern part of Lombardy. The area is characterized by typical alpine and...

This is certainly one of the most popular cliffs on Lake Iseo for so many reasons: a beautiful green...

The chapel of San Lorenzo (St. Lawrence) is clearly visible on the peak of the highlands dominating ...

The small church next to the Castro cemetery is known as the Madonna del cimitero (Madonna of the ce...

The Rocca (fortress) of Castro

In the area called Rocca (fortress), behind the village of Castro and in a panoramic position on Lak...

The port of Castro was probably founded in the first half of the 11th Century as a landing place of...

“On the west shore of Lake Iseo, at only 1 km from Lovere, one of the most beautiful villages ...

Elisa holiday home is located in a panoramic position in Castro, the village can be reached on foot ...

This elegant lake-view penthouse is located in Castro, on the northern shore of Lake Iseo, in a rece...

Apartment on the fourth floor of a building of 80 square meters, consisting of two rooms for a total...

BB Iseo Lake is a lakefront house with terrace, which is available for guests at breakfast time, for...

In a quiet and characteristic alley of the historical center of Castro, the smallest medieval villag...

Large apartment recently renovated, with a breathtaking view of the lake with 3 bedrooms, kitchen-li...

Vulcano Village is widespread hotel in the enchanting setting of the village of Castro. The taste...

Casa Rocca is located in the quiet and enchanting area of Rocca di Castro, an ancient medieval fortr...

Activity closed for the year 2021 Gabriella and her family welcome you to Bellavista, a comfortable ...

Where to eat in Castro

List of restaurants, pizzerias and trattorias in Casro, where it is possible tasting delicious local...