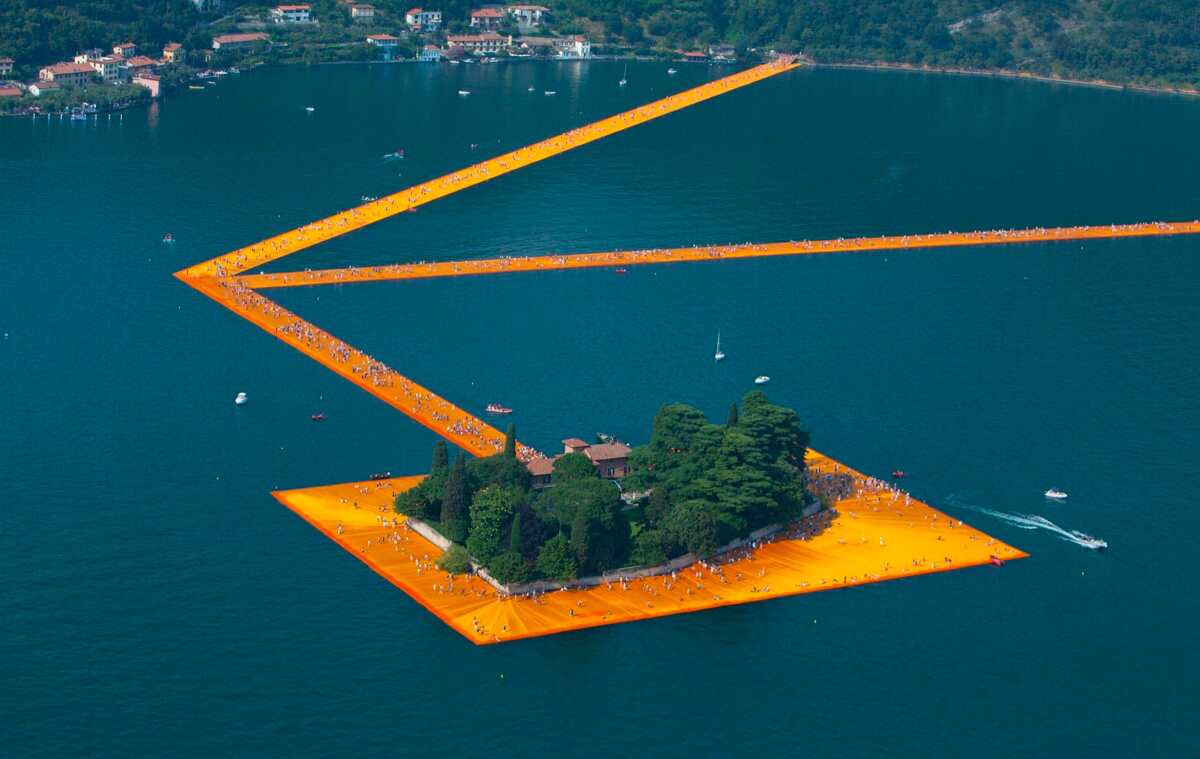 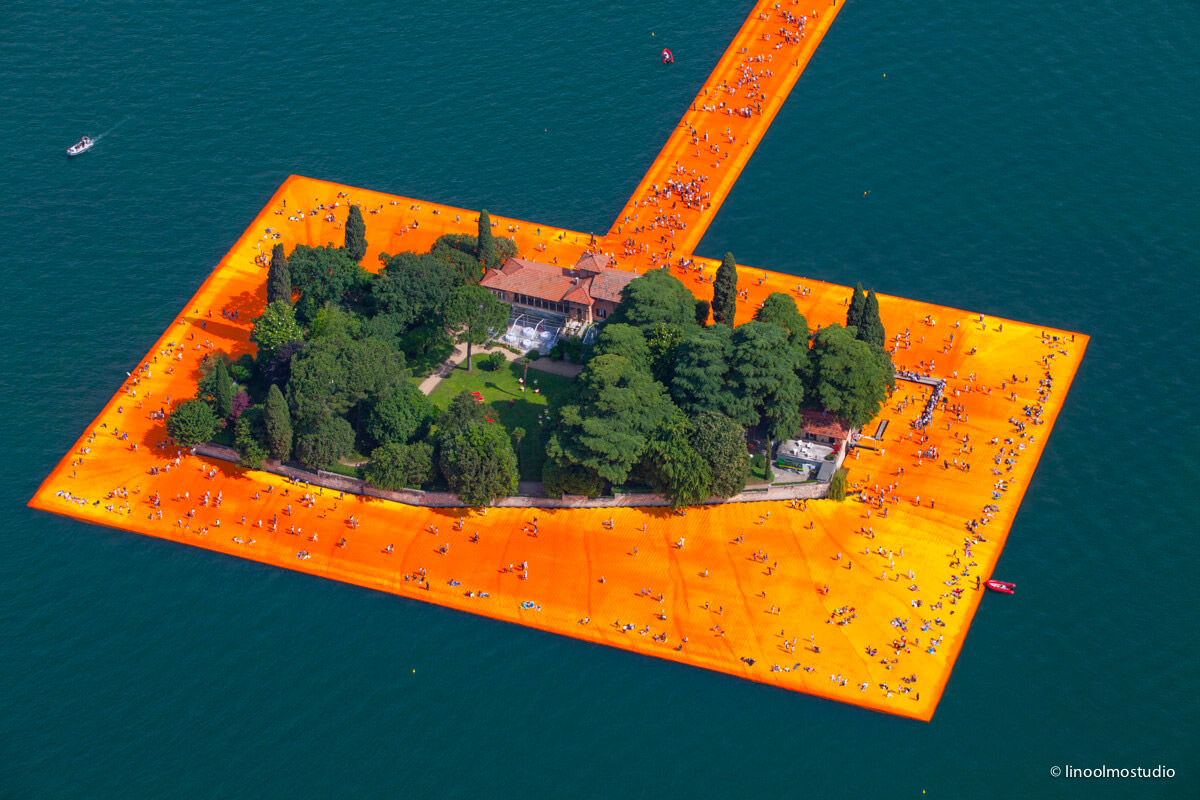 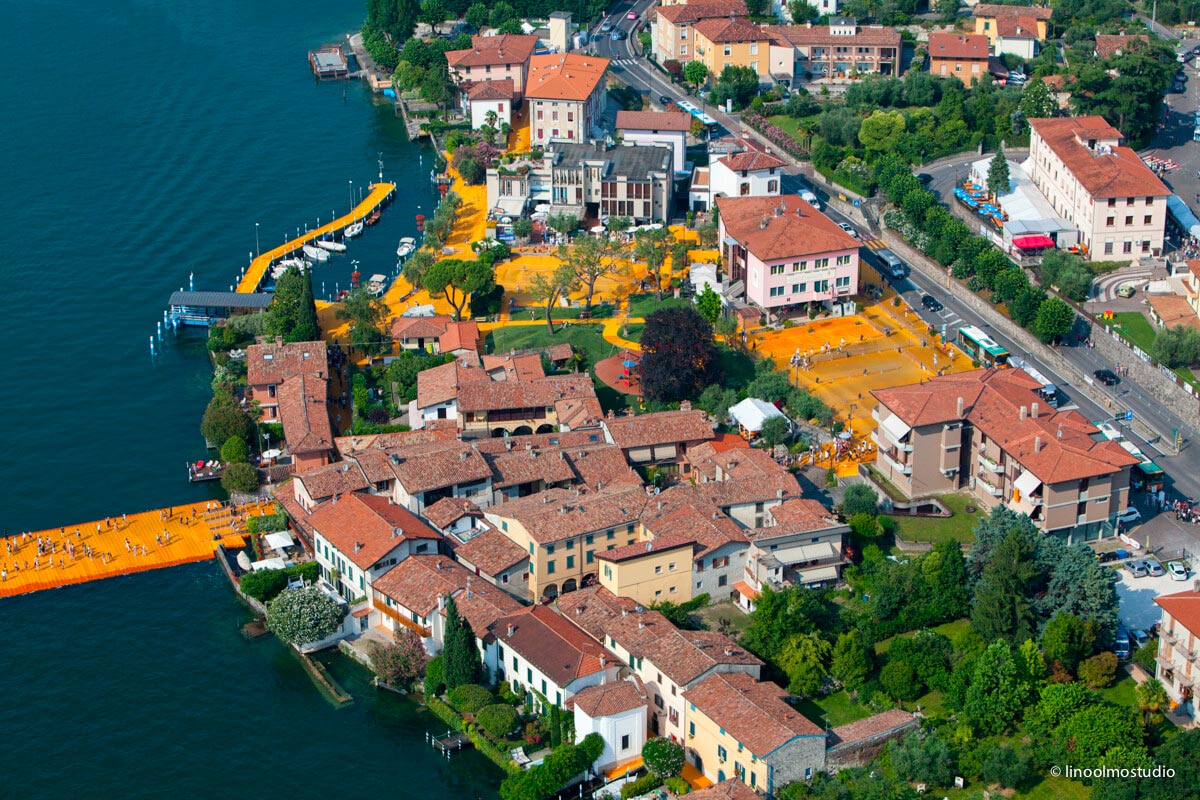 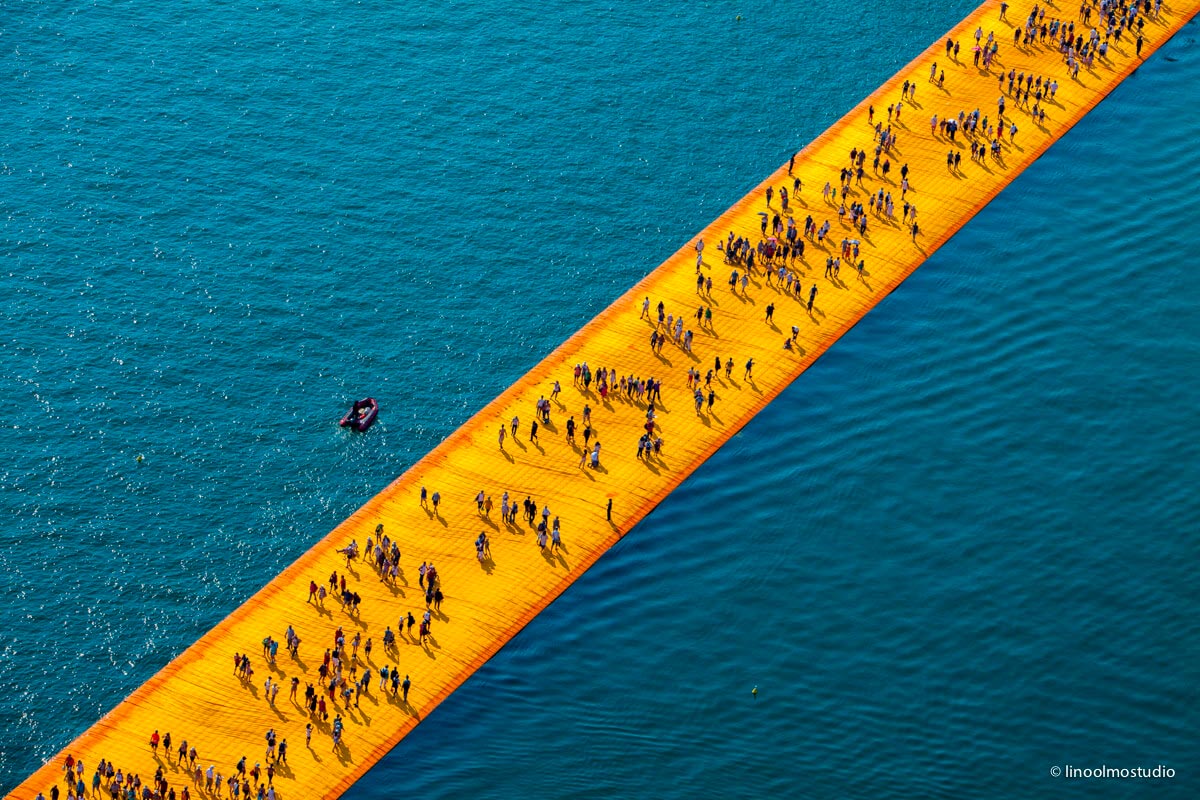 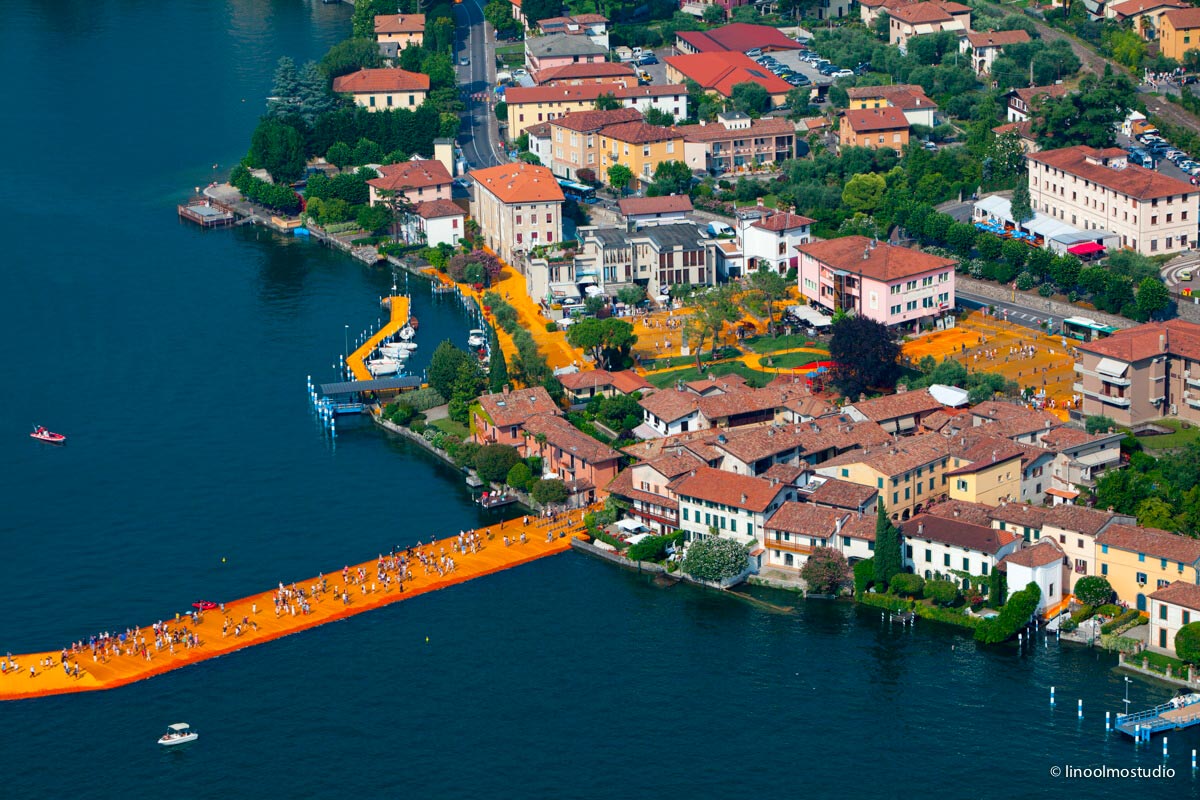 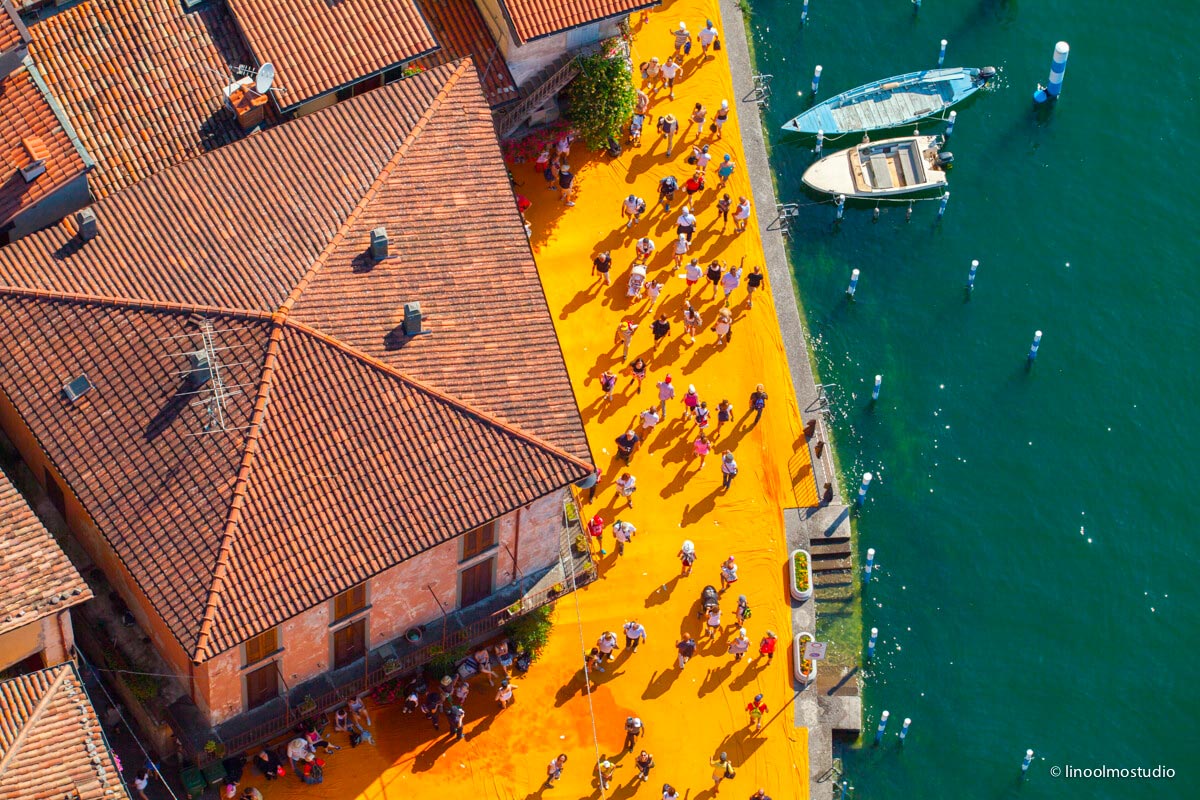 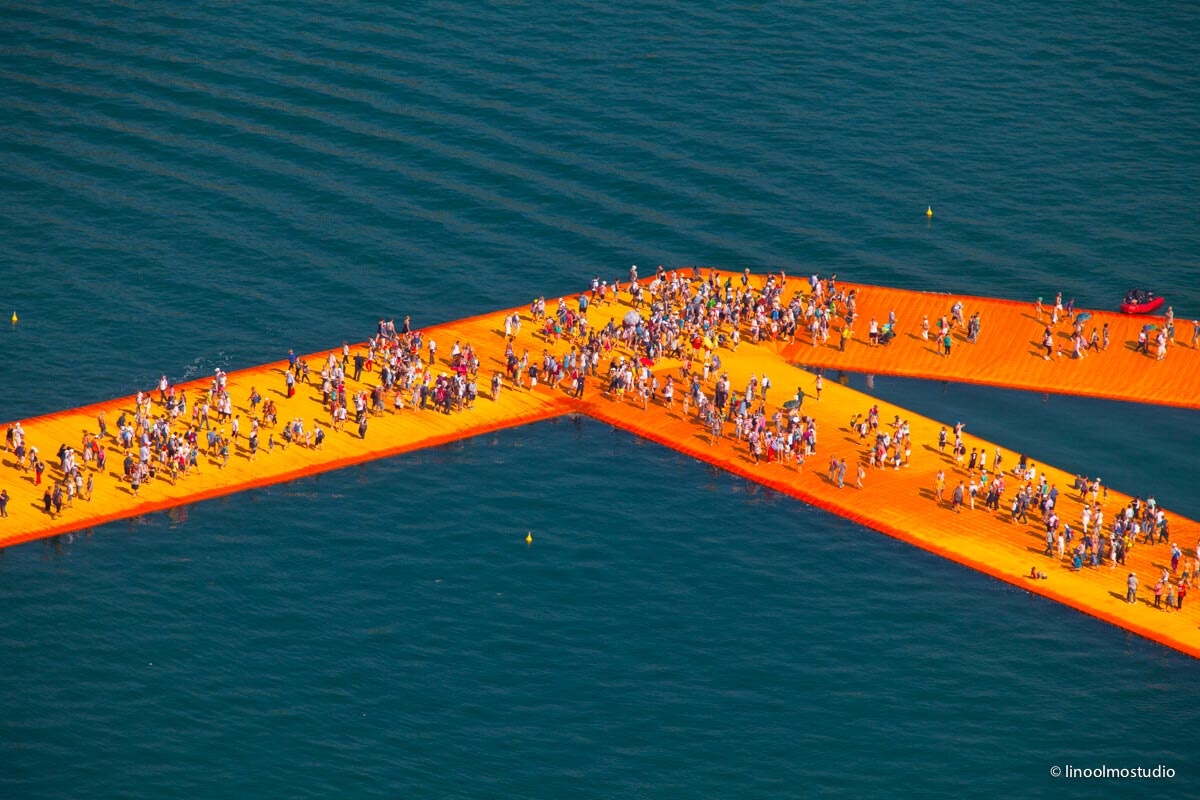 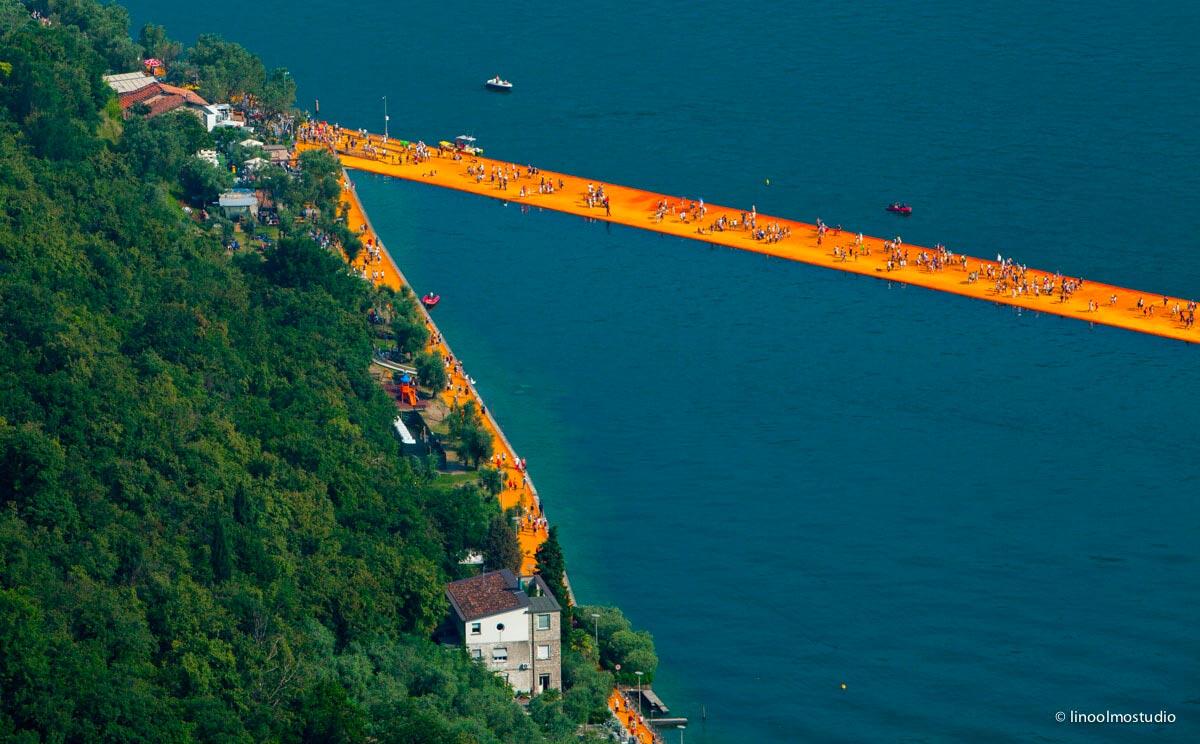 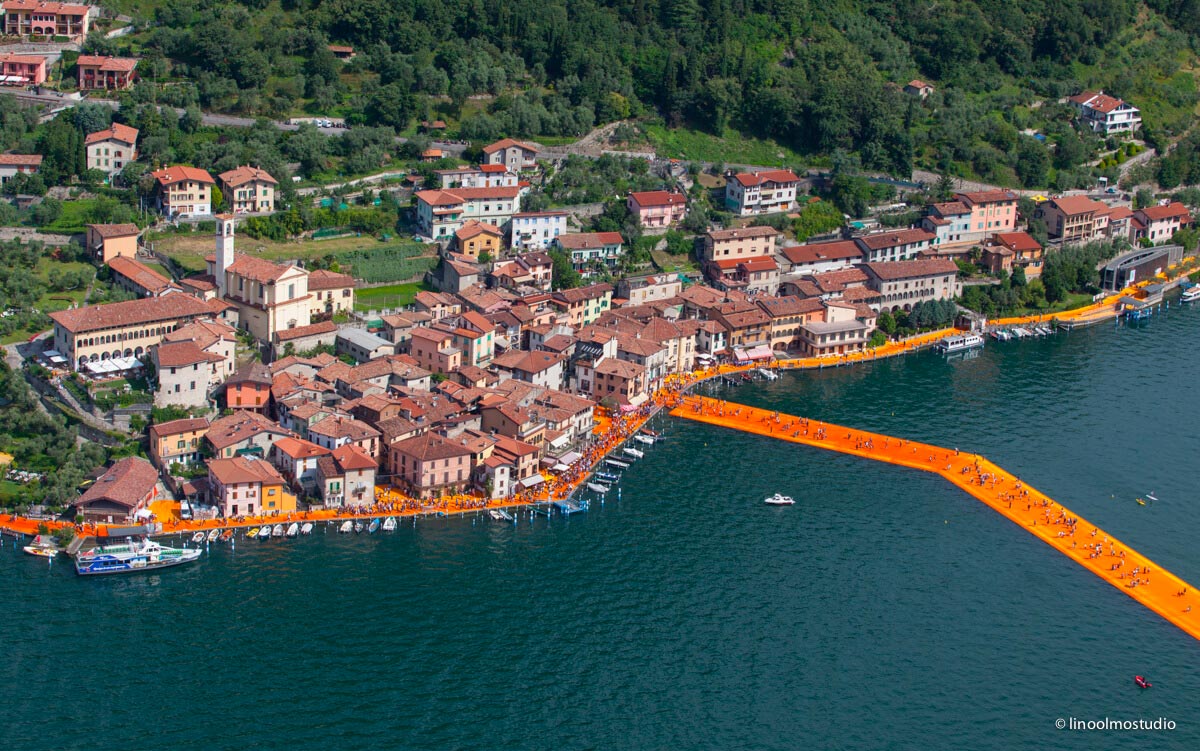 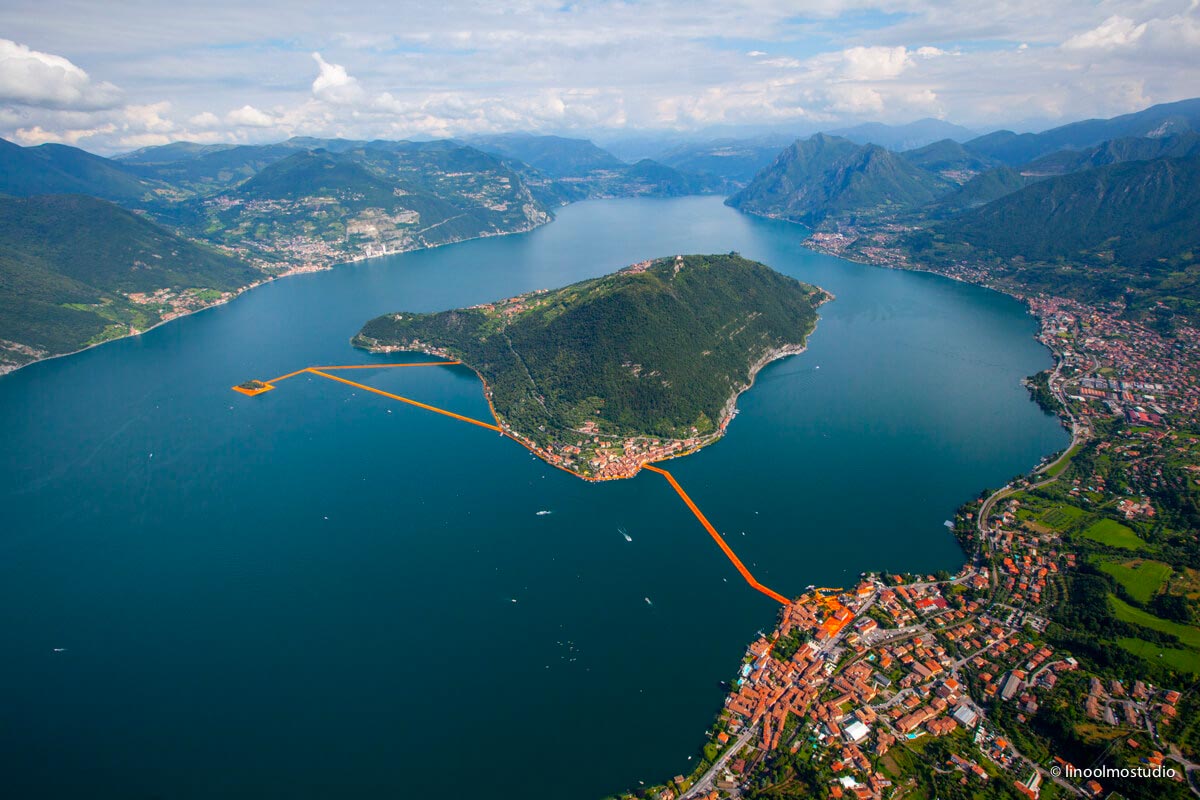 
After two years of work, the Bulgarian artist Christo opened his The Floating Piers project to the general public between 18 June and 3 July 2016.

Although the project was provisional, as often happens to contemporary works, is the last major episode in order of time and media coverage of the attention Lake Iseo pays to contemporary art.

Visitors were able to follow the installation that wound its way between Sulzano, Monte Isola and the island of San Paolo (St. Paul).

This direct use was accompanied by the new possibility of viewing the landscape from the vantage points on the surrounding hills.

The project idea was formulated and proposed by Christo and his wife Jeanne-Claude in 2000 Metres Wrapped, Inflated Pier, which was to be made at the Rio de la Plata in 1970, and in The Daiba Project, Project for Odaiba Park, designed for Tokyo Bay in 1996. These large and highly urbanised locations did not allow the implementation of the project due to technical, bureaucratic or economic complications.

Christo therefore moved on to a new dimension, intimately relating to the attraction of lake landscapes, certainly influenced by the climatic and morphological conditions of this landscape, which fully meet the technical needs of the project.

The Floating Piers, which was created with this in mind, is therefore a site-specific installation, which presents, in the intentions of its creator and those of the project director Germano Celant, an unavoidable and unprecedented relationship with the environment that hosted it for two weeks.

The project consists of a series of floating pontoons in high density polyethylene anchored to the bottom of the lake, and covered with iridescent and rippled orange fabric. Thanks to these features, the installation surface catches and reflects the light in its various hues and variations of shades that range from the metaphysical sense of the zenithal light to the dusk atmospheres, through to the night lit by the moon and artificial lights. The lake also plays an active role in entering into contact with the perceptual sensations of those who take the orange road with its sloping edges, which are designed to immerse gently into the water.

The Floating Piers operation enriches the gallery of water projects that Christo and Jeanne-Claude have developed in different places across the world in the last forty years. Such as for instance Wrapped Coast.

One Million Square Feet, the project on the Little Bay in Sydney 1969 or Surrounded Island, installation inaugurated in 1983 in the California Biscayne Bay, The Floating Piers proposes a new dialogue with water, an element that has always been a challenge for man and his attempt to achieve urbanisation.

With The Floating Piers Christo proposes a new architectural solution, which achieves the urban utopia of a new reading of the landscape, the views and the habits of its inhabitants. This utopia is put in place with state-of-the-art engineering means and its own poetics that, detaching itself from narcissistic individualism mechanisms, is able to interpret certain requirements of contemporary art. At the same time, emphasising the primarily tactile and sensory dimensions of the project, the artist helps the viewer to leave his passive role imposed by the elitist system of exploiting a part of contemporary art making it an active part of the work.