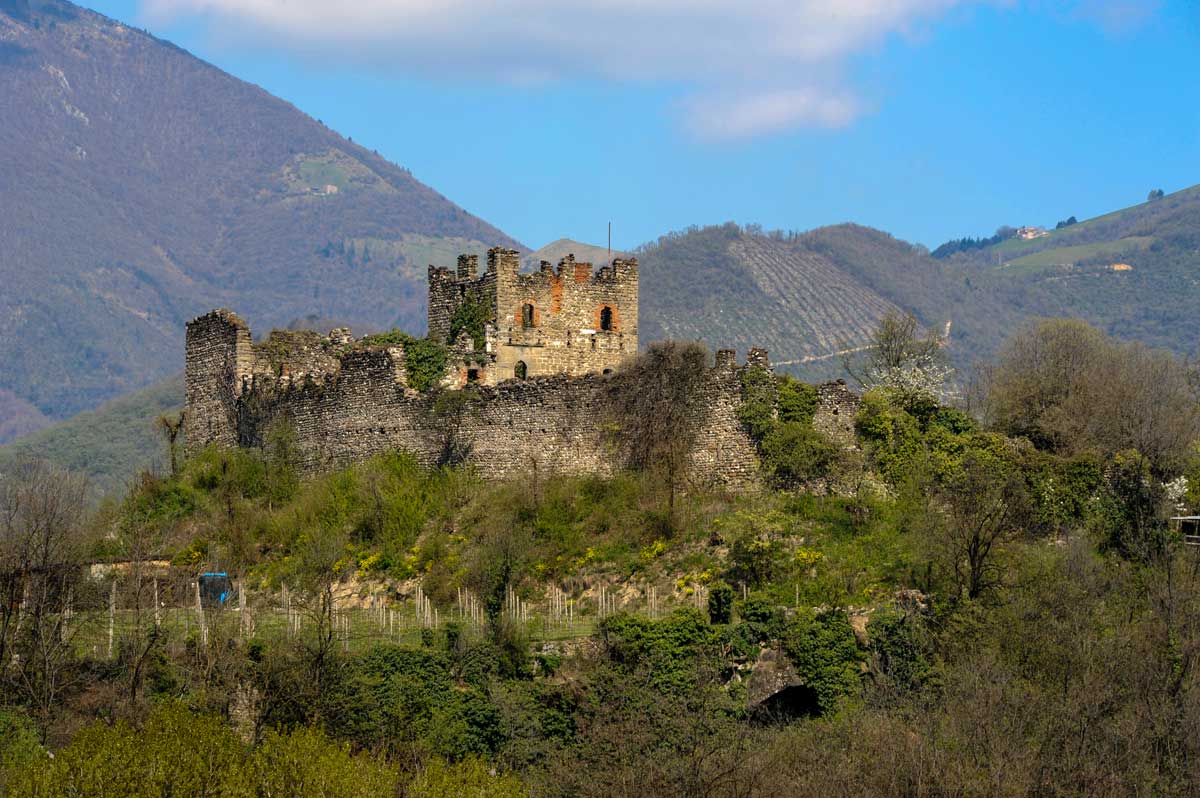 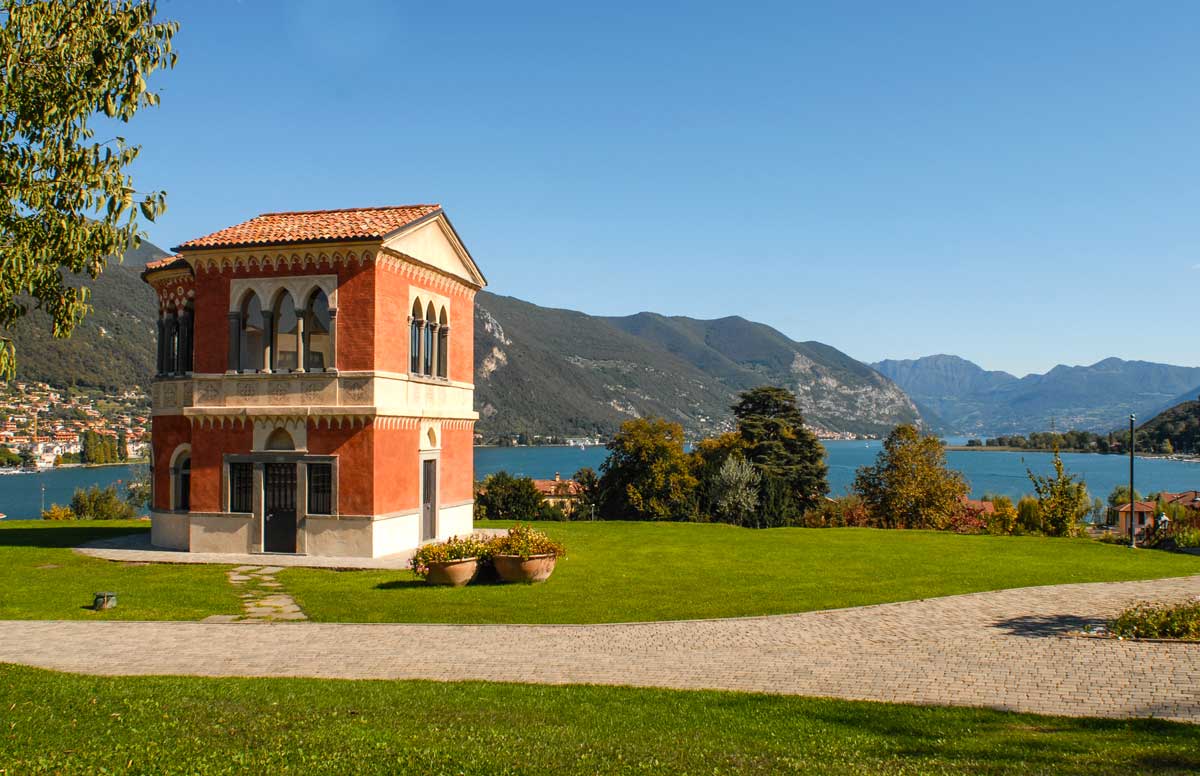 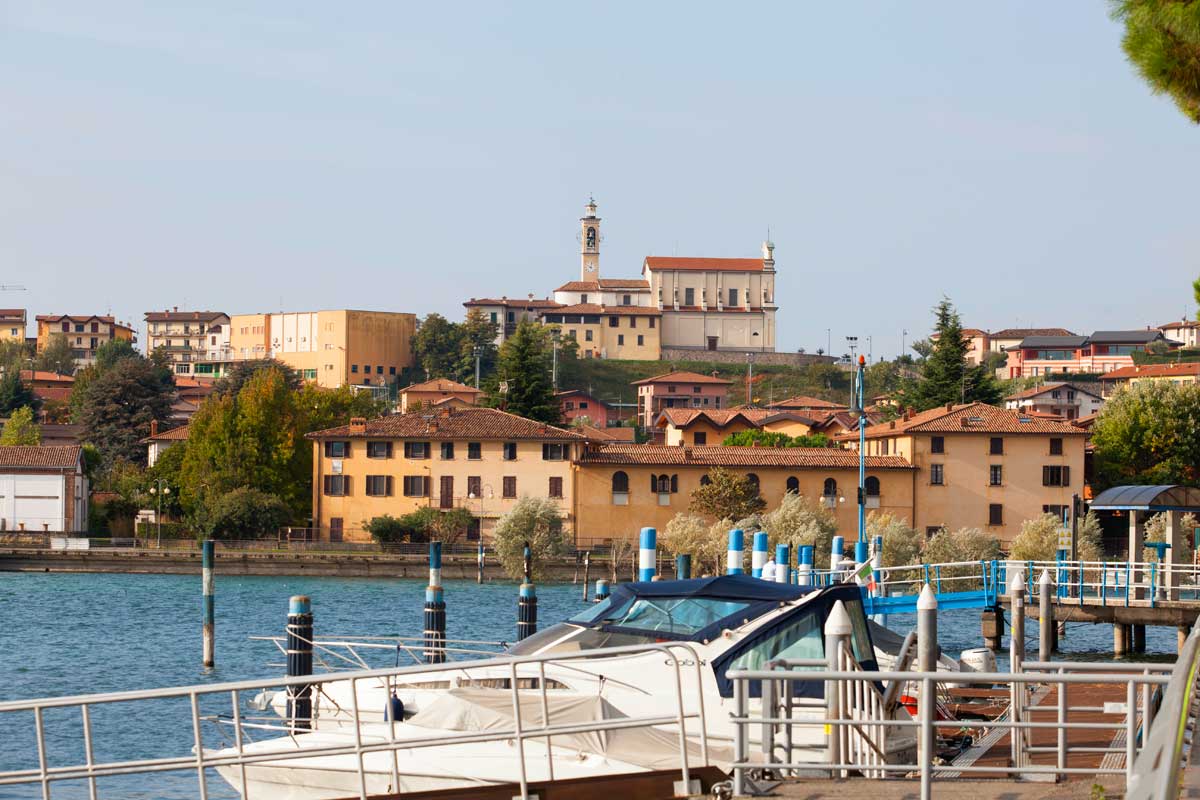 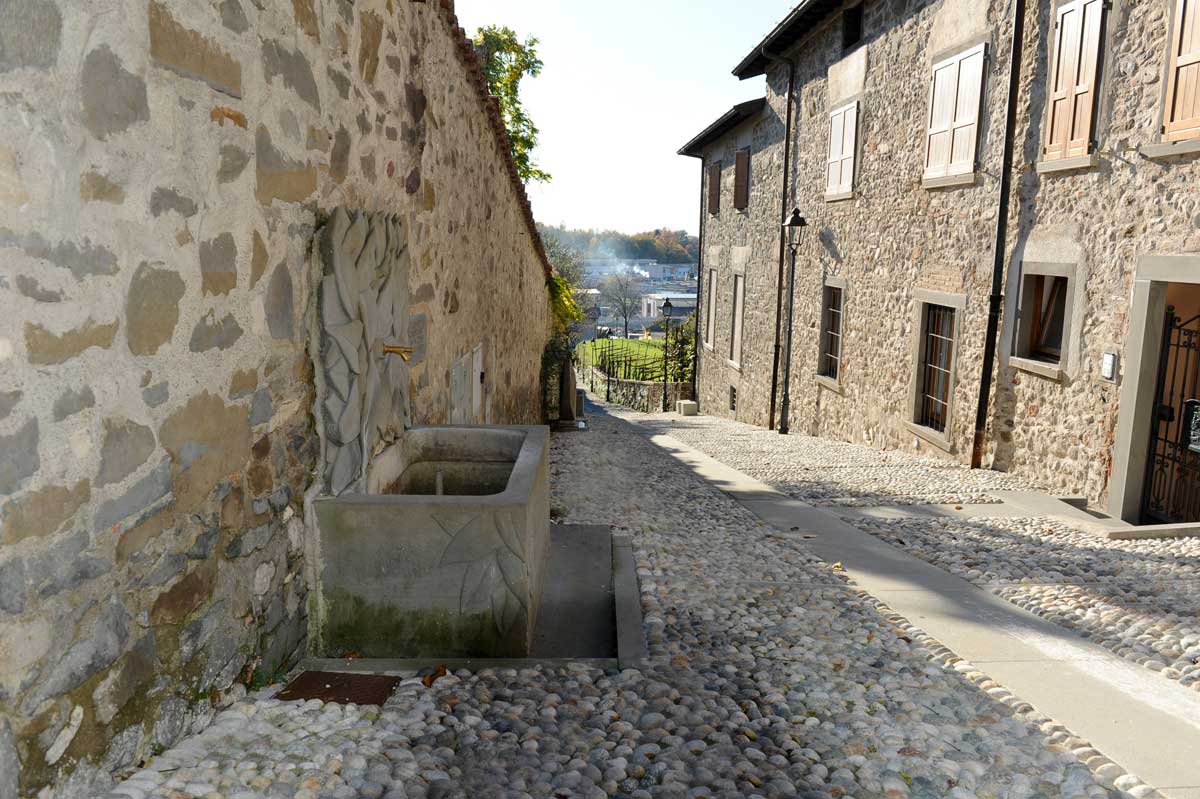 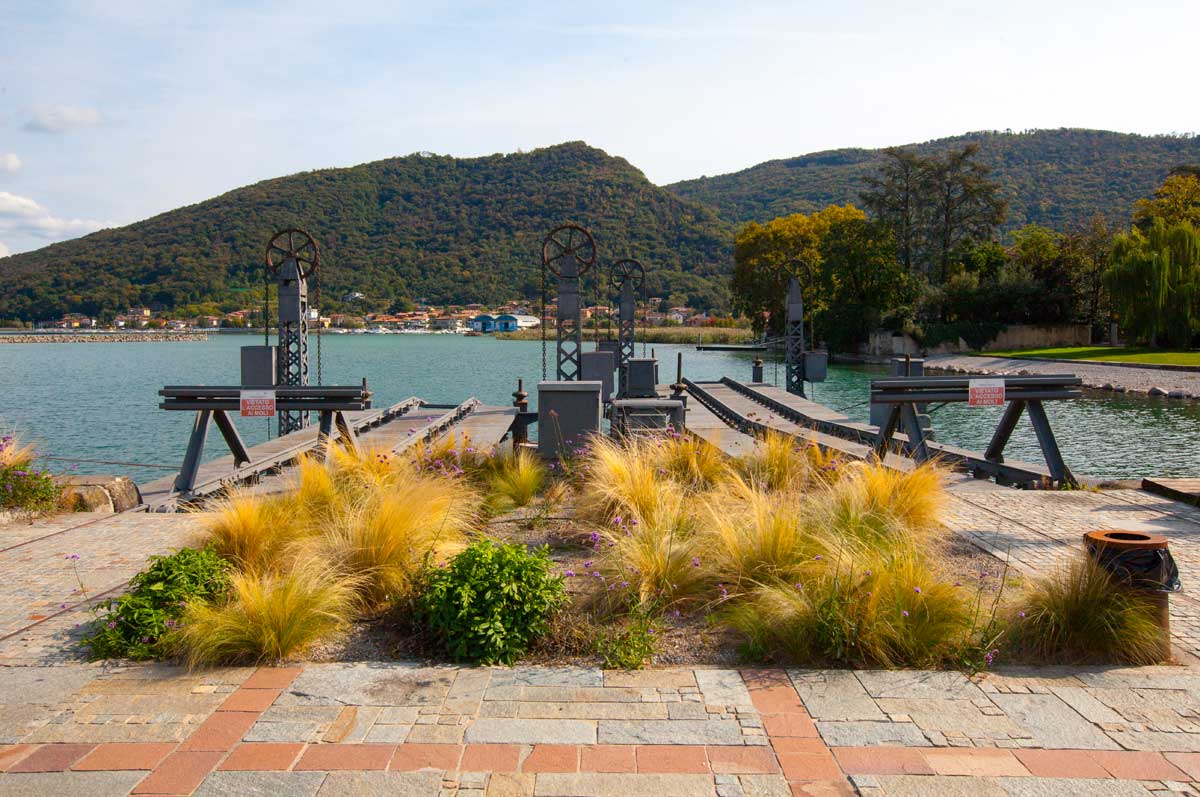 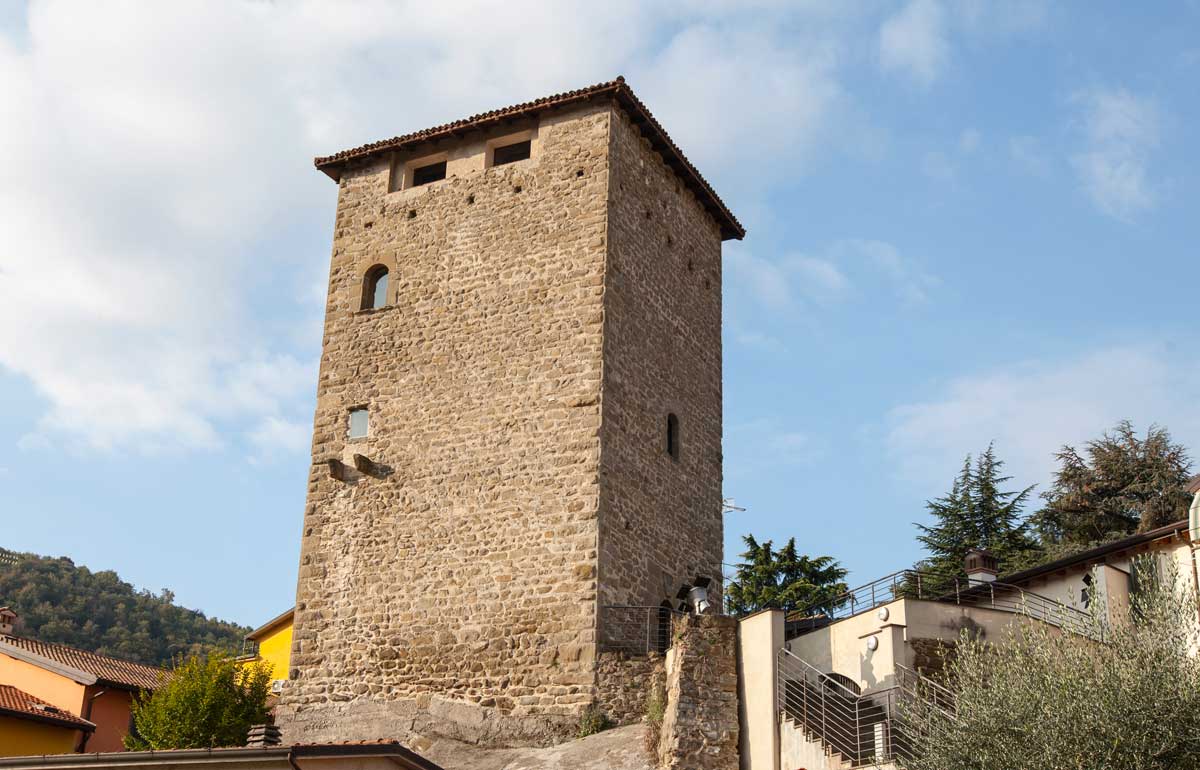 
The monastery of San Faustino Maggiore, founded in 849 by the bishop of Brescia Ramperto, was attested in 1126 a.d. in some land parcel investing documents in the Paratico and Rivatica area in favour of a community of local people. The monastery retained its properties until the end of the thirteenth century when its possessions were slowly acquired by the tenants who took on the noble prerogatives.

In the Designation (list of properties) of 1279 a. D. of the dominus Lanterio de Paratico, it is clear that the transfer of the properties of the Brescia monastery to the local nobility was almost totally concluded. The act is of great historical importance since, in addition to confirming the undoubted economic and social primacy of the Lantieri family, it sketches a picture of the occupation and exploitation of the agricultural and productive territory (mills, fishing stations, arable land, vineyards, chestnut groves, quarries and lime kilns) for the second half of the XIII century. The castle, the possession of which is shared by Lanterio with other local domains, and the societas molarum, which concerned the management in consortium form of the extraction and processing of the wheels for the mills, are documented, too. The grey sandstone quarries (called Sarnico stone) were located on Mons Romenini near Vanzago.

In 1276 the churches in Paratico were San Silvestro, inside the castle, Santa Maria, the future parish church, and San Pietro, located in a lonely valley near the Oglio.

In 1347 the Oldofredi family of Iseo obtained permission from the Brescia municipality to dig the Fusia seriola, a canal derived from the Oglio river for irrigation purposes in the fields of Palazzolo, Rovato and Chiari. The canal is still used today and can be explored between Paratico and Palazzolo through a suggestive pedestrian path.

The weakness of the rural municipality, the presence of fragmented aristocratic powers and the interest of the Municipality of Brescia towards the border area on the Oglio prevented the formation of building aggregates of a certain consistency. The villages of Paratico, Rivatica, Tengattini and Vanzago remained organized in districts until the end of the 1900s. In the Venetian era the Lantieri, now branched out in many families, settled mainly between Paratico and Capriolo. In 1511 the castle is described as in total abandonment.

Of a great impact on the territory was in 1521 the fall of the Lanzichenecchi of Charles V who poured on Rivatica, Paratico and Capriolo sowing massacres and destruction, before moving to Franciacorta.

After centuries of abandonment and a subsistence economy, there were the first signs of recovery, with the construction in 1817 of a wooden bridge between Rivatica and Sarnico and the start in 1841 of a shipping line for the transport of goods between Lovere, Iseo and Paratico.

A small hospital was opened in Vanzago in 1846 and the Paratico-Palazzolo railway section was inaugurated for the transport of the products that arrived on barges in Paratico in 1876. In 1889 the bridge connecting Sarnico was redone using the bolted iron beams technique. The structure is still practicable today. After the Second World War, urban expansion and architectural transformations saturated the wide-open spaces between the districts to such an extent that today it is difficult to recognize the historic landscape that has stratified over the centuries.

The visit to Paratico can begin by following the ancient royal road (now via Cavour). The itinerary borders on the castle hill, the Lantieri tower (XIV century) to reach the square where the road climbs the hill with a wide panorama of the Lantieri castle and on the low medieval houses of the district below. From the top of the municipal hill at the town hall, you can proceed to Segafieni park to enjoy the view and admire the Oselanda (Uccellanda) of neo-Gothic architecture, or head on to the ridge with views of the lower lake, towards the parish church of Santa Maria Assunta, to then continue in the direction of the ancient church of San Pietro. In Rivatica, visit the iron bridge, the nineteenth-century style station with Liberty references, and then proceed to the piers made with stone ballast, used as a place of exchange between barges and trains used for transport of steel products from Lovere. Since 2010, the area is used as a public naturalistic park, the Dancing Herbs Park, where traces of industrial archaeology, the lake landscape and vegetation specifically designed to give the visitor playful and changing sensations coexist.

Wonderful Taxodium distichum wood in Paratico, where the river Oglio meets the Lake Iseo. It is pos...

The Lantieri tower plays a major role in the architectural and historical heritage of Paratico, gi...