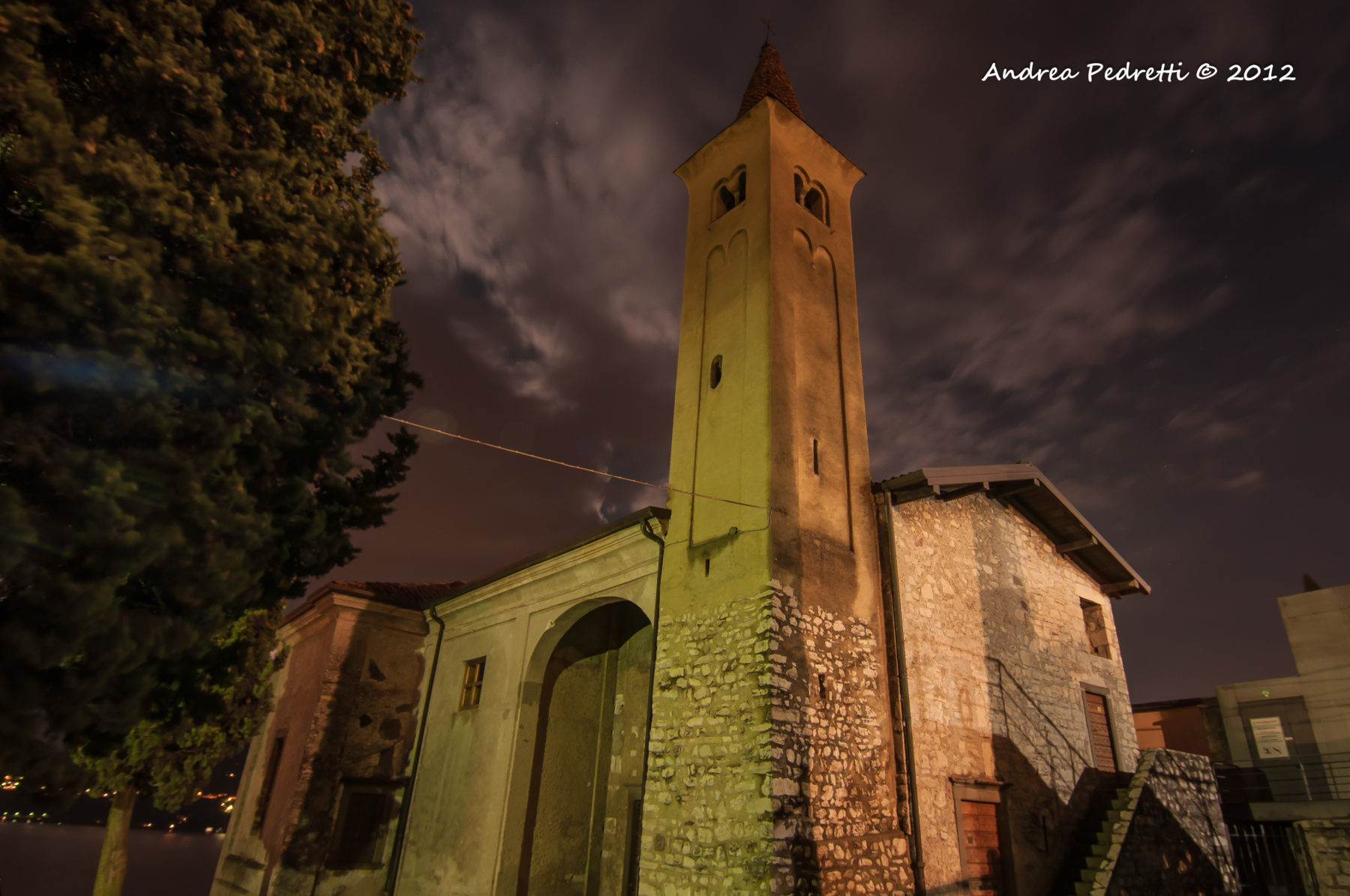 
The Romanesque origin of St. Peter, parish church of Tavernola until 1570, can only be inferred by some walls and the bell tower [Itinerary C]; in fact, the building underwent various transformations over the centuries.

Also the floor plan, with buildings added to the first portion, confirms an uneven expansion over time. The interior consists of a single nave with gable roof in exposed wood lying on a masonry pointed arch; the inside façade preservers the masonry loggia supported by two rib vaults resting on the walls and a central column. The square shaped sanctuary is covered by a pointed rib vault, partially frescoed in the 15th Century with Christ Pantocrator and symbols of Evangelists John and Luke. The background wall is entirely occupied by the Crucifixion between St. Peter and St. Paul, the work of an unknown artist during the late 15th Century; the altar was placed against the wall in the 18th Century, thus destroying some plaster portions and concealing others under the altarpiece. The altar table and frontal featuring Telamon angels were the work of Giulio Selva (1693) and moved to this location from the parish church of Santa Maria Maddalena (St. Mary Magdalene); the frame is made of plaster. After recently removing the Traditio legis altarpiece, the cross with the Magdalene and part of the figures of Christ, the Virgin and St. John were revealed. The work is a pleasant combination of architectural elements, often not suitably matched in perspective terms, and a Lombard landscape with a ‘geology’ in Mantegna style. This sort of provincial version of Bramante’s models bears witness to the intention of local commissioners to upgrade the church’s paintings according to the trends of the times in the main Lombard cult towns and cities. The Madonna and Child (right wall of the sanctuary) commissioned by the Foresti family in 1497 is in the same style and represents a Gothic style Madonna (see the cloak and throne base) enclosed in an architecture characterised by countless Renaissance elements.

During the early second decade of the 16th Century, Girolamo Romanino realised two mural paintings depicting the Madonna and Child, St. George, St. Maurice and St. Peter and St. Paul presenting the offerings and a Crucifixion. The former, on the left wall of the sanctuary, appears to the visitor as an imposing choral scene with the Madonna at the top centre, at the top of a set of steps between St. George on the left and St. Maurice on the right. St. Peter and St. Paul on the lower section complete the representation, introducing two different groups of a local powerful family, perhaps the Fenaroli. The second painting is located in the top section of the inside façade. It is an uncompleted work, abandoned and then covered by a layer of white plaster, under which a few fragments can be noticed, referring to a Crucifixion with bystanders: the analysed fragments revealed parts of Christ’s loincloth, leg and arm, some small portions of the cross and moulded frame enclosing the scene. The larger fragment, visible for quite some time and depicting three male heads, caught the attention of historians for many years as it was considered to be an isolated painting, and not part of a group of works.

The monumental setting, the central perspective, the use of long graphic finish strokes, recalling Northern traditions and Venetian colours, are the main characteristics that link the work to the early years of activity of the painter, perhaps 1512, when Romanino stopped in Tavernola after fleeing from Brescia which had been looted by French troops. However, it was a short stay. He was already in Padua in early 1513. He returned to the territory of Sebino two decades later, in Pisogne around 1534.

The two side chapels of the church refer to 18th Century upgrades: the one on the right depicting the souls of the Purgatory features a fairly rare plaster adornment for Sebino, while the one on the left is characterised by neo-classic shapes.