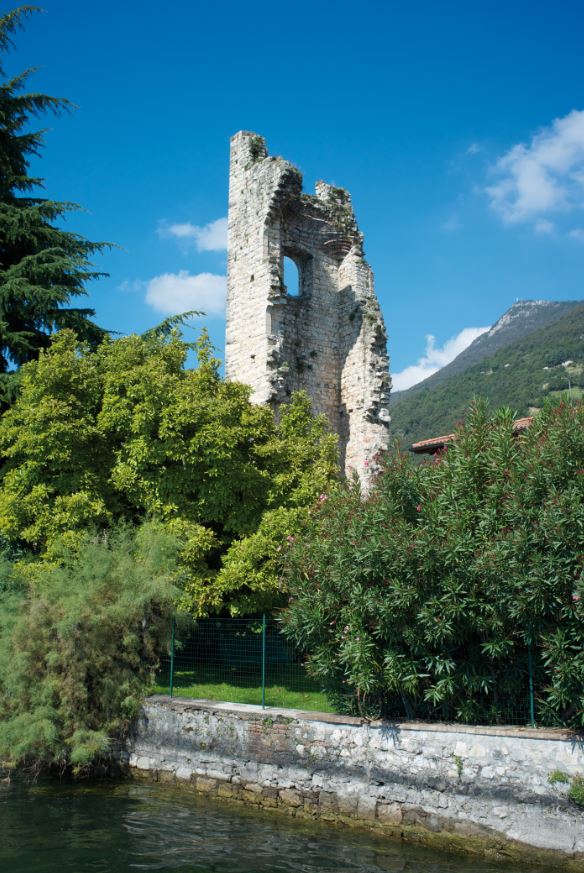 
The fortified buildings of Predore were built both in the hilly area of the borgo, and close to the lake, hence securing different control locations in the village: this distribution is similar to that of other lakeside villages (Riva di Solto, Lovere and Sarnico).  The sources of the late 14th Century cite the presence of a porta de Predorio, which was part of the ancient circuit wall built to defend the whole village on three sides (leaving the lakefront free).

The defence building displaced on the lake, which remains today the symbol of the medieval borgo, is the so-called halved Foresti Tower: only half preserved throughout the original height (26 m) it is clearly visible despite standing inside Villa Lanzi (private property) built in the 15th Century as a stately home. The tower was built with limestone blocks and tree stump foundation (6.40 m each side). The elevation is made of white and grey limestone blocks; with opening slots for weapons in the walls. On the top floor the tower has arched observation windows, and the top still features two of the four merlons on which the wooden roofing was set. The presence of alternating colour thanks to the white and grey blocks and the types of preserved openings allow us to date the building to the 13th Century.

Initially identified with the Omicidemo Foresti tower destroyed by the Ghibellines in 1404, the halved Tower relates the legend of the joint ownership of two Foresti brothers, one Guelph and the other Ghibelline: legend has it that the building was dismounted by one of the brothers to spite the other. Preservation of half of the original building rules out the possibility of the foundations giving way, but was rather due to the deliberate dismantling by specialised workers to reveal, to the whole borgo, and those who arrived by boat, the defeat of the owners. Similar cases are also seen in Sarnico, in Cividate Camuno and Grone (in Val Cavallina).

Moving to the high area of Predore, along the slope of the hill, a castle stood in the Montelina district (of which traces remain in the place name via Castello), quoted in the 19th Century “Castello Castelli” record due to the destruction of a tower (in 1404). The castle complex was built in the upper part of the village for the purpose of controlling the borgo, in addition to being a refuge for the lords and the population in case of danger. Nowadays we can see (within private property in via Anfossi), the remains of a tower on an artificially levelled hillock: the structure, built in the 13th Century using square limestone blocks was partially rebuilt as seen from the different material used in the elevation.

At the beginning of the last century there are reports of access to a wall (no longer visible today) surrounding the village: the walls extended west following the course of the stream Rino used as a moat, and extended east to the Carrobbio district (eastward). Here stands the so-called “Polveriera Tower” (in via Carrobbio): the tower-house, later used as a powder magazine, is still over 7 m high, and is made of large limestone blocks arranged in horizontal courses. On the ground floor there is a vaulted door with pentagonal blocks, to the sides of which there is a narrow rectangular window and a slot, while on the second floor there is a vaulted window and another slot. The building was destroyed in height and was flanked by a perimeter wall that now surrounds the property, only to be rebuilt at the top, re-using the original stones and travertine blocks.

The Castle of Zorzino

The Rocca (fortress) of Castro

The Medieval houses of Solto Collina