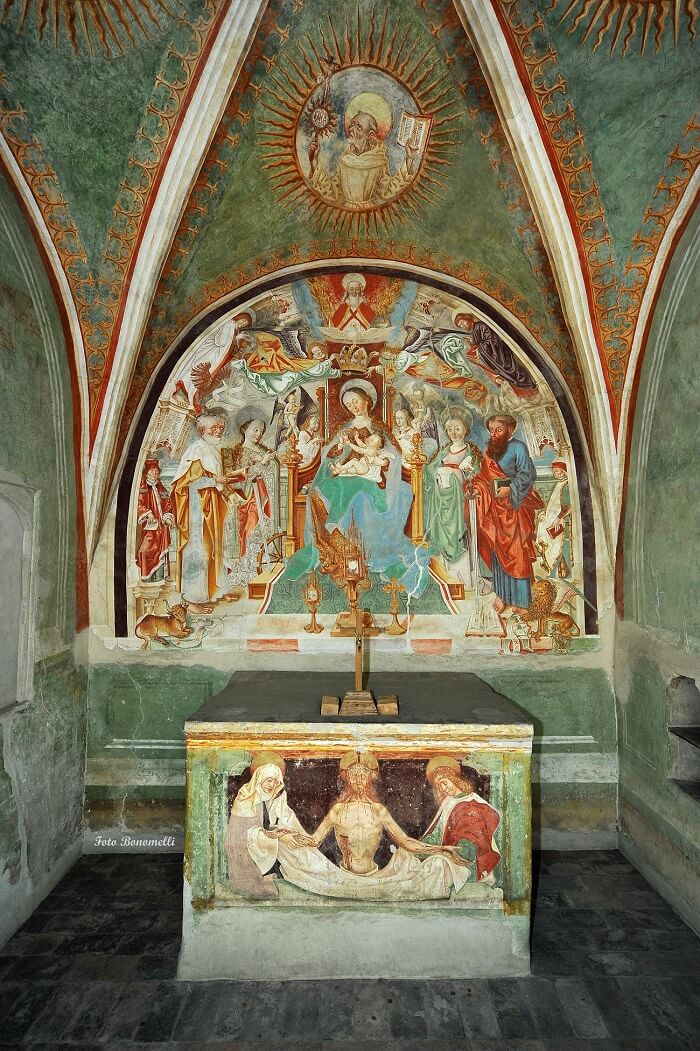 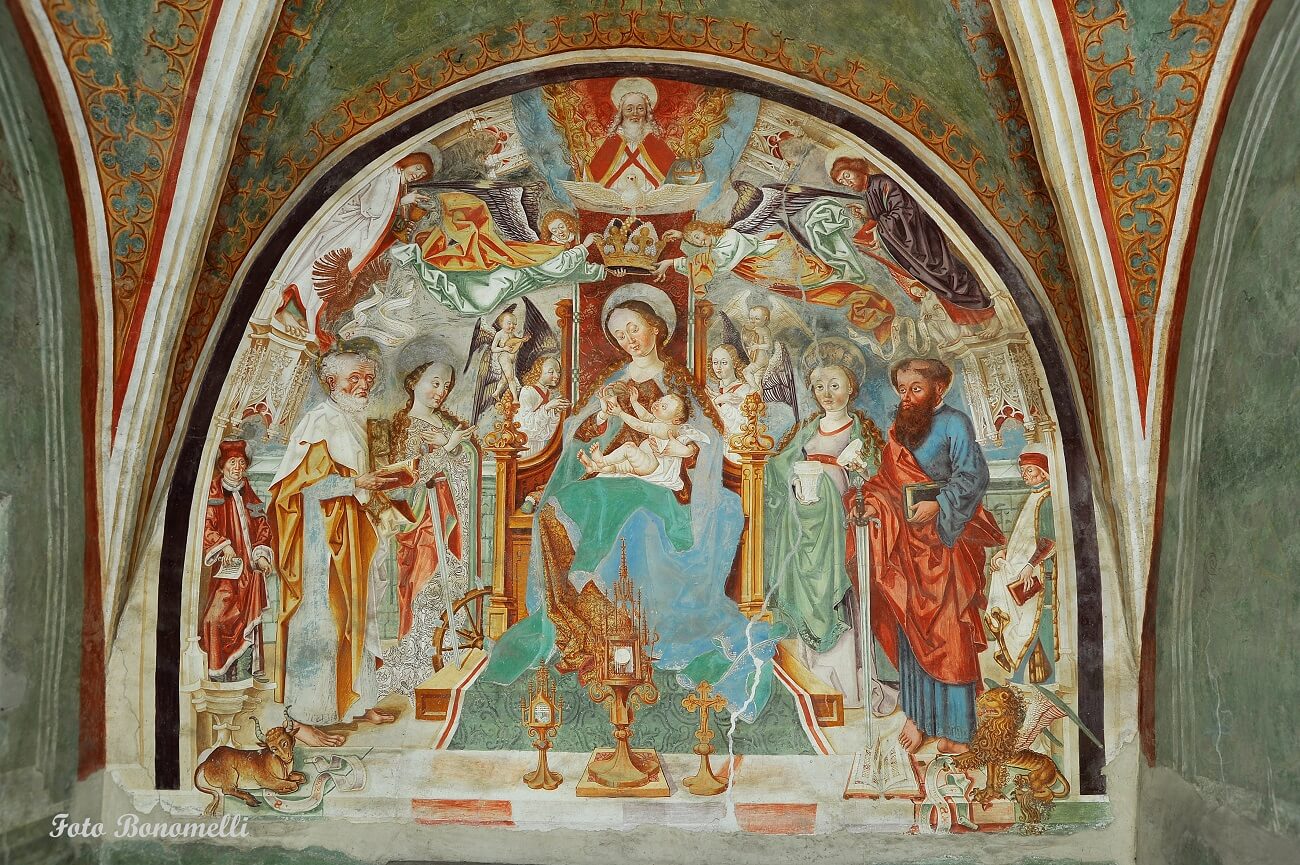 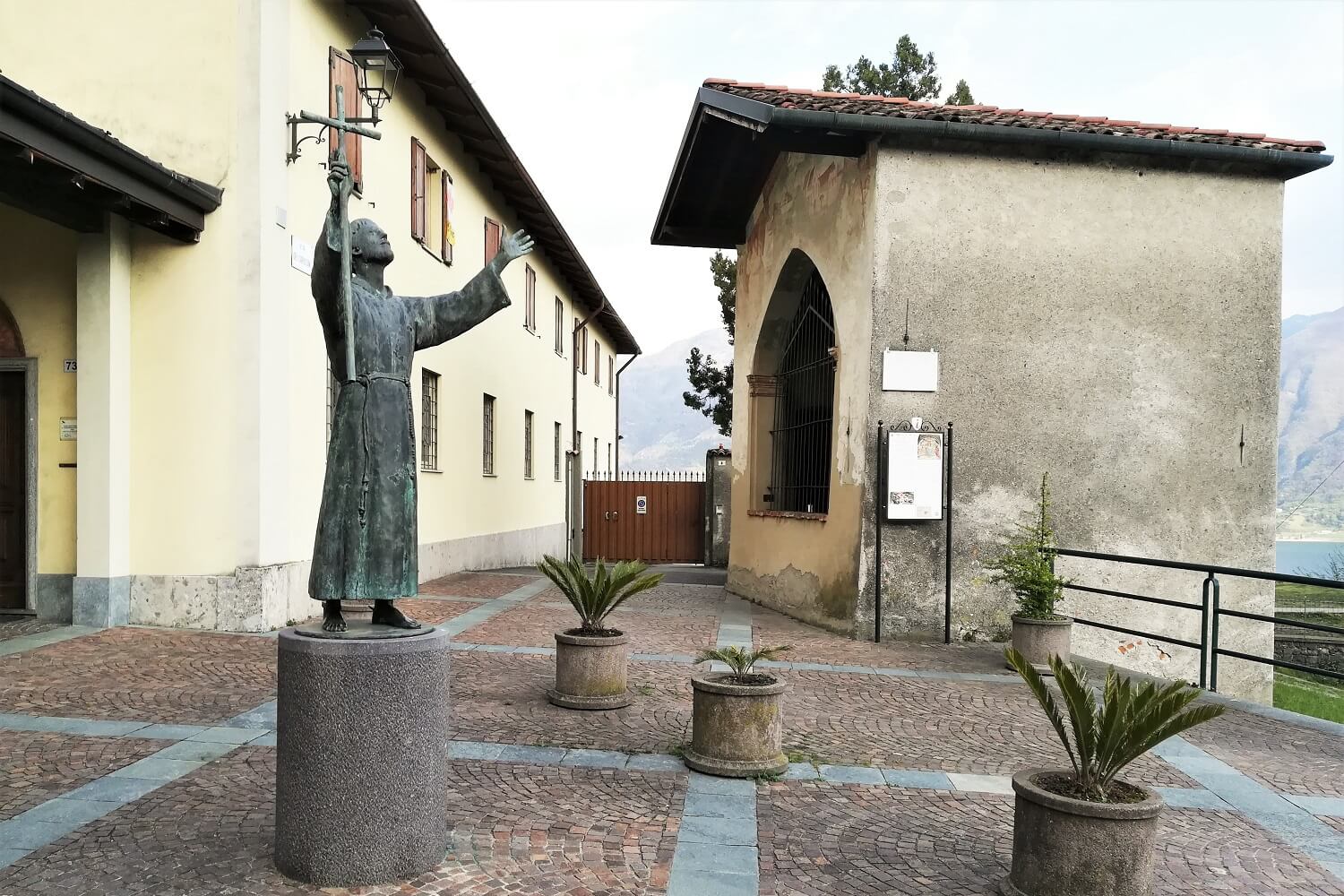 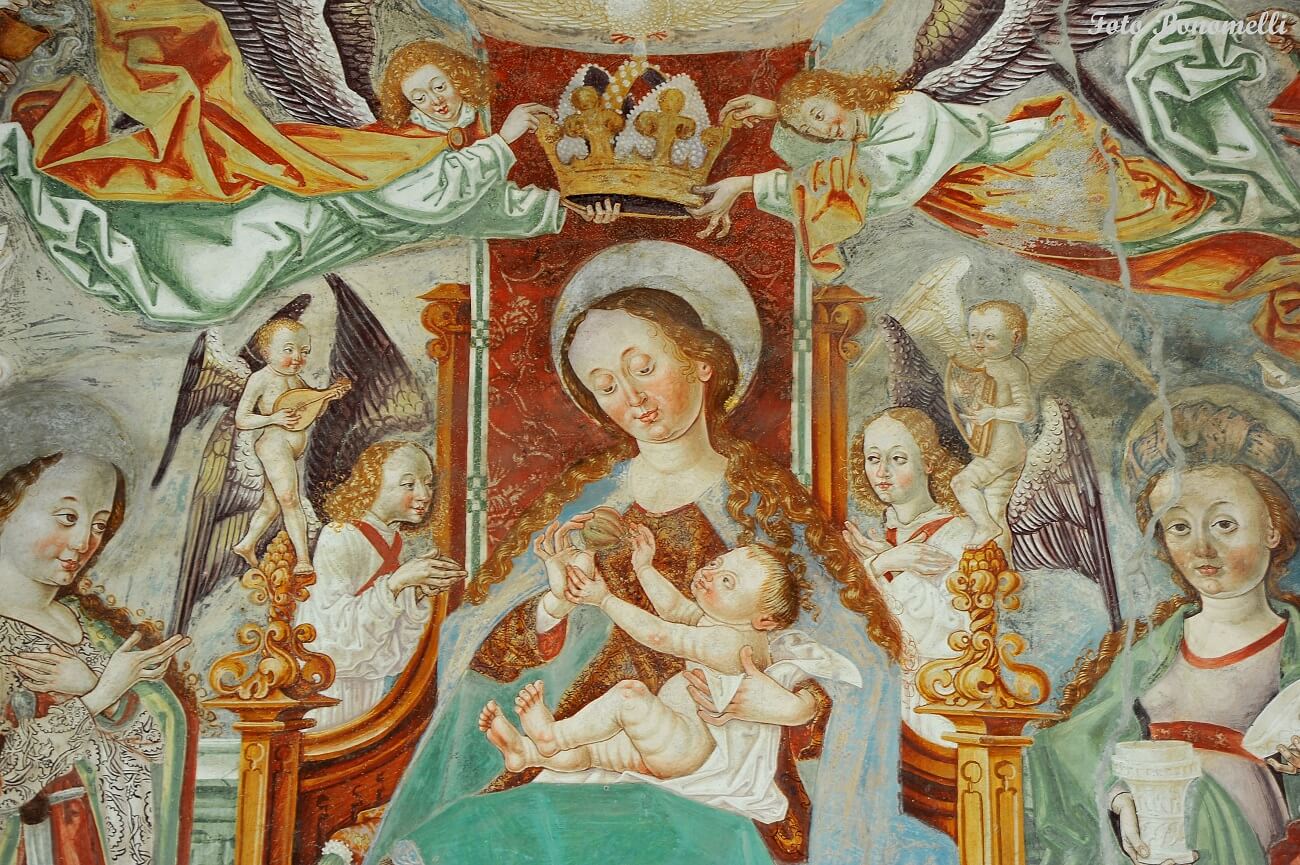 
Situated in a context of great interest from the landscape point of view, a kind of natural balcony looking South over the lake, the Cappella di San Pietro is the most significant testimony of 15th Century painting in Lovere and documents trade relations with the Empire’s territories.

Evidence of the existence of a pre-Roman and Roman place of worship dedicated to Minerva has been found on the Colle di San Maurizio (Hill of San Maurizio), across which the old road accessing Lovere ran. A church is documented in 1430, entrusted to the Third Franciscan Order. The caretaker, Friar Giovanni Celeri was attributed the decision to call on the Observant branch of the Franciscan Order, whose settlement is documented in 1448. The Franciscans were responsible for building the convent and church. The latter, probably extended during the last quarter of the 15th Century, was a simple single-nave church with side chapels, covered by a wooden roof, divided into two parts by a wall (partition) frescoed with scenes from the Passion. Nothing remains of the building demolished in 1805. The current building is the result of reconstruction work started in 1877.

St Peter’s Chapel, which stands opposite the 19th Century church, is the only evidence of the ancient settlement. It is a simple square brick building covered by a cross vault and opened by an arch to follow church functions.

The chapel has preserved its paintings, dating back to 1493 or 1494, work of a painter from the Alto Adige/South Tyrol from the school of Michael Pacher, identifiable with the Master of Rodengo/Rodeneck or Simone da Tesido/Taisten.

The façade has a painting of the Stigmata of St. Francis with devout people to the right. This fresco mainly stands out for its extraordinary vision of the lake landscape. To the sides, images of two warrior saints, to the left Maurice, to the right George, the patron saint of Lovere.

The back wall of the small room is set within two imposing late Gothic architectural wings with images of the four Evangelists in 15th Century clothes. In the Centre, the Madonna, crowned by two angels, is sitting on a monumental throne. She is offering the Child a pomegranate, symbol of wisdom. To her side (from the left) Saints Peter, Catherine of Alexandria, Mary Magdalene and Paul engaged in a lively conversation consisting of looks and gestures. Above, the Eternal Father and the dove of the Holy Spirit.

Three church objects are painted in front of the fresco, at the height of the altar: a reliquary, a monstrance and a crucifix. The frontal of the altar is decorated with a dramatic Imago pietatis.

The vault has the Holy Face at its centre, surrounded by Saints Bernardino of Siena, Anthony of Padua, Bonaventure and Louis of Toulouse looking out of tondi (circular panel paintings), created with a lively air of portraiture. Unfortunately, the adornment of the side walls is missing, painted in monochrome green earth according to Italian taste. The remains of an image of Saint Jerome with the lion can only be seen on the left wall.

The complex iconographic understanding of the work, alluding to the incarnation of the Son of God, his Passion and actual presence within the Eucharist, points to the involvement of one of the brothers of the nearby Convent.

The intervention of an artist from Alto Adige/South Tyrol is not surprising given the trade contacts Lovere cloth merchants had with the Empire, reaching even Tyrolean markets. Other imported products include the statue of San Sebastiano by Narciso of Bolzano/Meister Narziß from the Church of San Giorgio, where a chapel dedicated to the Saint was founded in 1485 and the noteworthy Crucifix with moveable arms (now both in Santa Maria in Valvendra) and finally the monstrance donated by the Gaioncelli family to the parish church, dated 1488, similar to the goldsmith’s work  reproduced by the painter on the back wall of the Cappella di San Pietro.