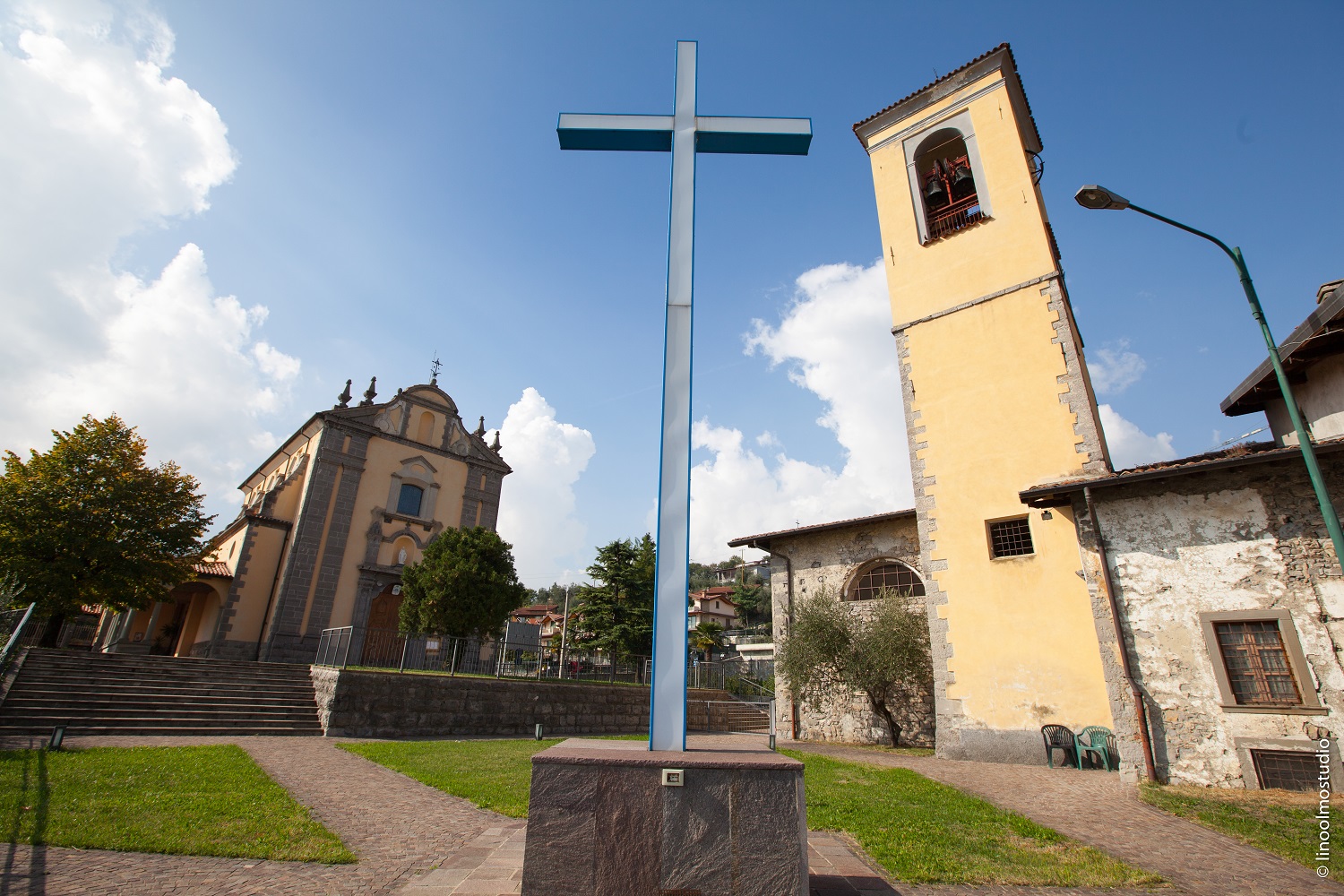 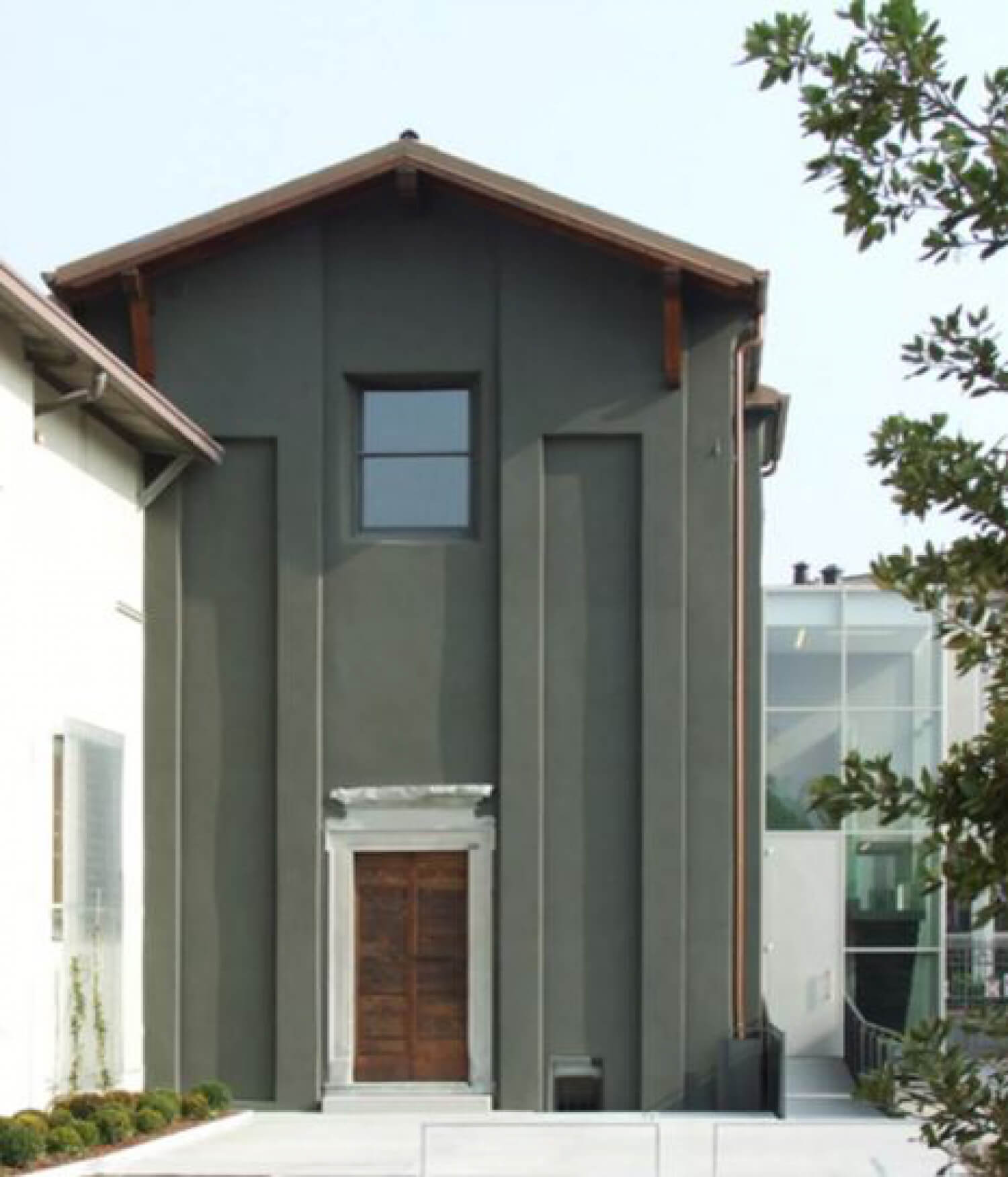 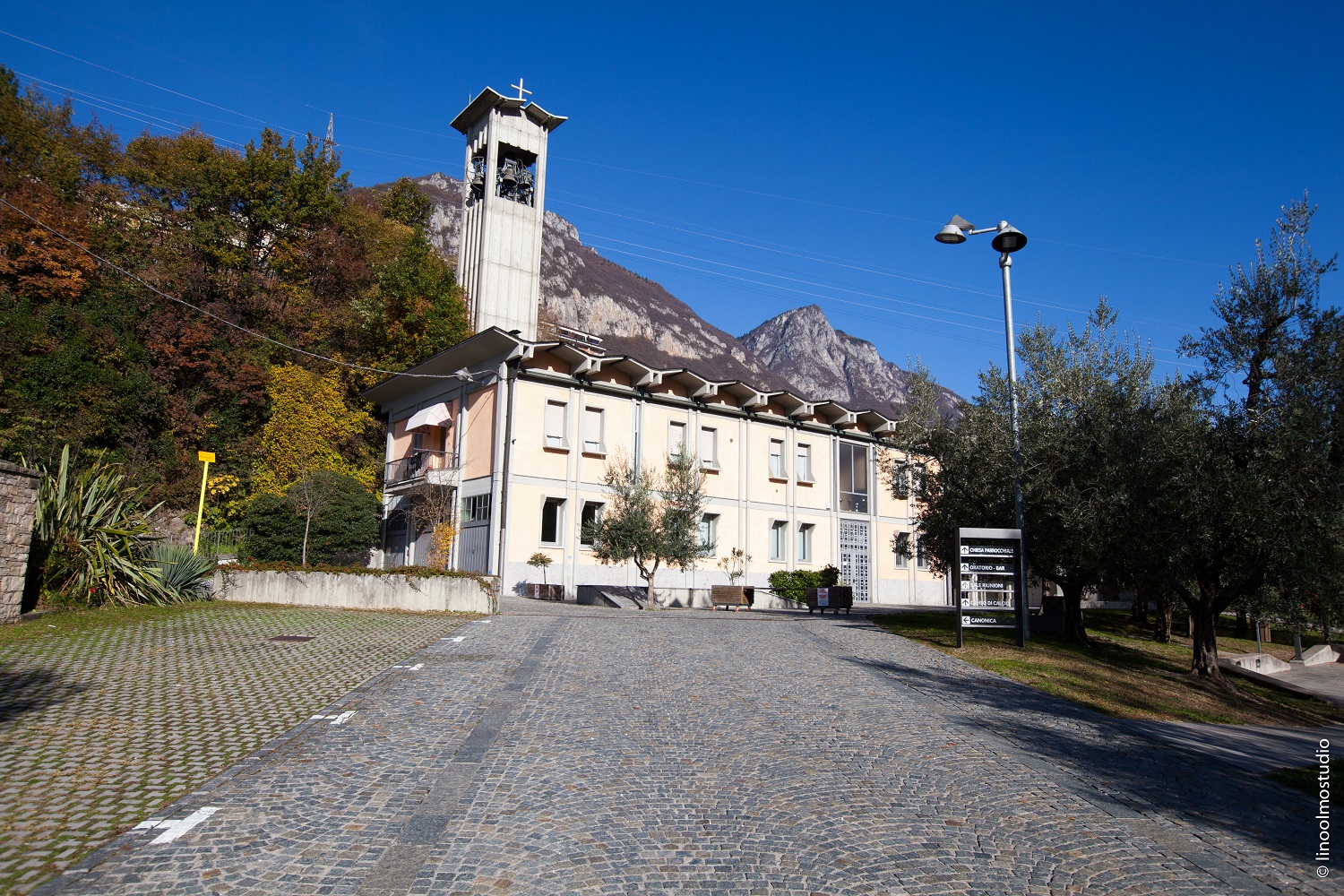 
In the period from the 1920s until the present day, the territory of Lake Iseo has accepted a series of challenges presented by contemporary architecture. This has led to some important architectural solutions which, exceeding all local mindsets, are recognised as exemplary phases of the development of architecture in Lombardy over the last century.

Little evidence is visible nowadays on Lake Iseo of the architecture of the twenty years of Fascism, although at least one building designed by an important architect of that period, Giovanni Muzio (1893-1982), deserves a mention. The building is the church of Santa Croce in Zorzino, a district of Riva di Solto. Giovanni Muzio covered the church with decorations reminiscent of Italian architecture of past centuries with particular reference to 17th and 18th Century classicism. This follows the idea of a recovery of the rational value of Humanism and a rediscovery of classicism, a true “return to order” that is deeply rooted in the Italian spirit of the artistic culture of the past.

On the contrary, modern Rationalism, in the strict sense, is that architectural movement which began in the 1920s and was then taken up with great vigour and developed in the years following the war. Within the context of Rationalism, the aesthetic beauty of buildings no longer requires a decoration that hides and suffocates the structure, but the aim to be pursued is the structure itself, in the materials used, the rigour of the design, the form and its crystalline rationality. An interesting example, for its very analogy with the rational architecture of the early 20th Century, is provided by the house designed in 1962 in  Vello of Marone by the architect Giorgio Grassi who was born in Milan in 1935. This white villa built with reinforced concrete columns and beams is on just one floor and with its rectangular layout it exploits the long and narrow space between the provincial road and the lake. The echo of Le Corbusier’s idea of ribbon windows and “roof garden” is clear. Overlooking the lake, the roof garden together with the two verandahs, the boathouse and the terrace, enable the building to be perceived as an integral part of the surrounding landscape, a feature which is also underlined by the light blue ceramic floor tiling and the green window frames.

From the viewpoint of functional post-war rationalism, it is interesting to consider the architecture dedicated to industrial activities. Mention should in fact be made of the hydroelectric power station in  Gratacasolo, in the district of Pisogne, although it may perhaps be less famous than others that were built in Valle Camonica (Camonica valley) between the 19th and 20th Centuries. Built immediately after the war by Luigi Guagliumi (1913-1995), the power station in reinforced concrete is L-shaped and was commissioned by Ilva Alti Forni e Acciaierie d’Italia in Genoa. The functional arrangement of the rooms with a skylight in the ceiling to provide zenithal light for the control room, combines with the rational decoration characterising the building. Inside a wall painting by the painter and illustrator Vsevolod Nikulin (1890-1968) is still preserved today. The artist, in collaboration with one of his pupils Giannina Lavarello, decorated a wall of the power station in 1950 with one of his favourite themes: a “talking map” in which Lake Iseo and the surrounding territory are animated by the people, the Ilva factories and the genius loci characterising them in a true meta-architectural repertoire.

Another example that is closer to the current day can be seen in the cement factory in Tavernola which were painted in 2001 following a project by the artist Jorrit Tornquist.  Once again, it is essential to refer to a form of meditated rationalism, although this time it is applied to the choice of colour for an architectural function: in the case of Tavernola, it became a real project for redeveloping the existing building thanks to a careful study of shapes (the square that is reminiscent of the pattern of a megapixel) and a tetrad of harmonising colours in different tints (red, green, brown and blue) which, together with the colour of the powder, the product of and produced by the cement factory, create a sort of painting or environmental scenery.

Apart from housing and industrial buildings, another sector which has challenged contemporary architecture involves places of worship. The church of Sant’Antonio Abate in the district of Corti in Costa Volpino was designed by the architect Luigi Cottinelli in the 1960s. With the exception of the bell tower on the outside, the structure of the church in prefabricated panels does not demonstrate any of the standard decorations typical of a church. Inside, the wall of the apse consists of a large window which looks out onto the surrounding countryside. Not only is it the nature that attracts the visitor’s attention, but also the decoration of the window made between 1972 and 1976 by Franca Ghitti (1932-2012), a sculptress who came from Valle Camonica and who used the traditional culture of these places as the starting point for developing her own personal poetry.

In 2009, work was completed on the redevelopment of the former church Sancte Marie de Nigrignano (St. Mary of Nigrignano) in Sarnico, a church of medieval origin which in the early 1900s, after being encompassed in the buildings of the Sebina factory, had become a warehouse. The architect Gualtiero Oberti was asked to give new life to this building, on one side developing it according to the forms of this century and, on the other, respecting its history and the materials of the building (such as the Sarnico sandstone or the wooden door) in the aim of converting it into a multi-purpose centre. Having restored the inside, a suspended wooden structure was created above the nave of the church that can be reached via an external staircase located on the southern façade and it is surrounded entirely by a glass case. This small architectural work, being anamorphic, can be appreciated for its perfect ovoid shape and as a symbol of rebirth only from a certain position and it has been rebaptised, quite significantly, “Peter’s boat”.

Finally, it is important to mention a last example in which contemporary architecture has had to blend with much older buildings. This concerns the project that was started in 1985 and designed by the architect Franco Maffeis in the residential area of Menzino, a district of Monte Isola. First and foremost, the aim was to recreate a synergy between the 17th Century villa and the old nucleus of houses by creating a pedestrian area. At a later date, the architectural redevelopment of the residential complex involved the restoration of the original materials that time had worn away such as the wood and the local stone which have been reintegrated with other materials typical of the modern age such as coloured iron beams in a fascinating style combining the past with the present.

The story behind this ancient building is nothing short of incredible: built almost a thousand years...

Church of Sant’Antonio Abate in Corti

A remarkable example of contemporary religious architecture, the church of Sant’Antonio abate (St....

Upstream of the small hillside village of Zorzino, the limpid late 15th Century volumes of the smal...

Industry on Lake Iseo in the 19th Century

Architecture and decoration between 19th and 20th centuries: Eclecticism and Art Nouveau in the area of Lake Iseo

The Fantoni and 18th Century sculpture

Eighteenth century painting in the area of Lake Iseo

Images of the Counter Reformation in the area of Lake Iseo

Romanino in the area of Lake Iseo, Val Camonica and Franciacorta

The renovation of religious buildings during the Renaissance