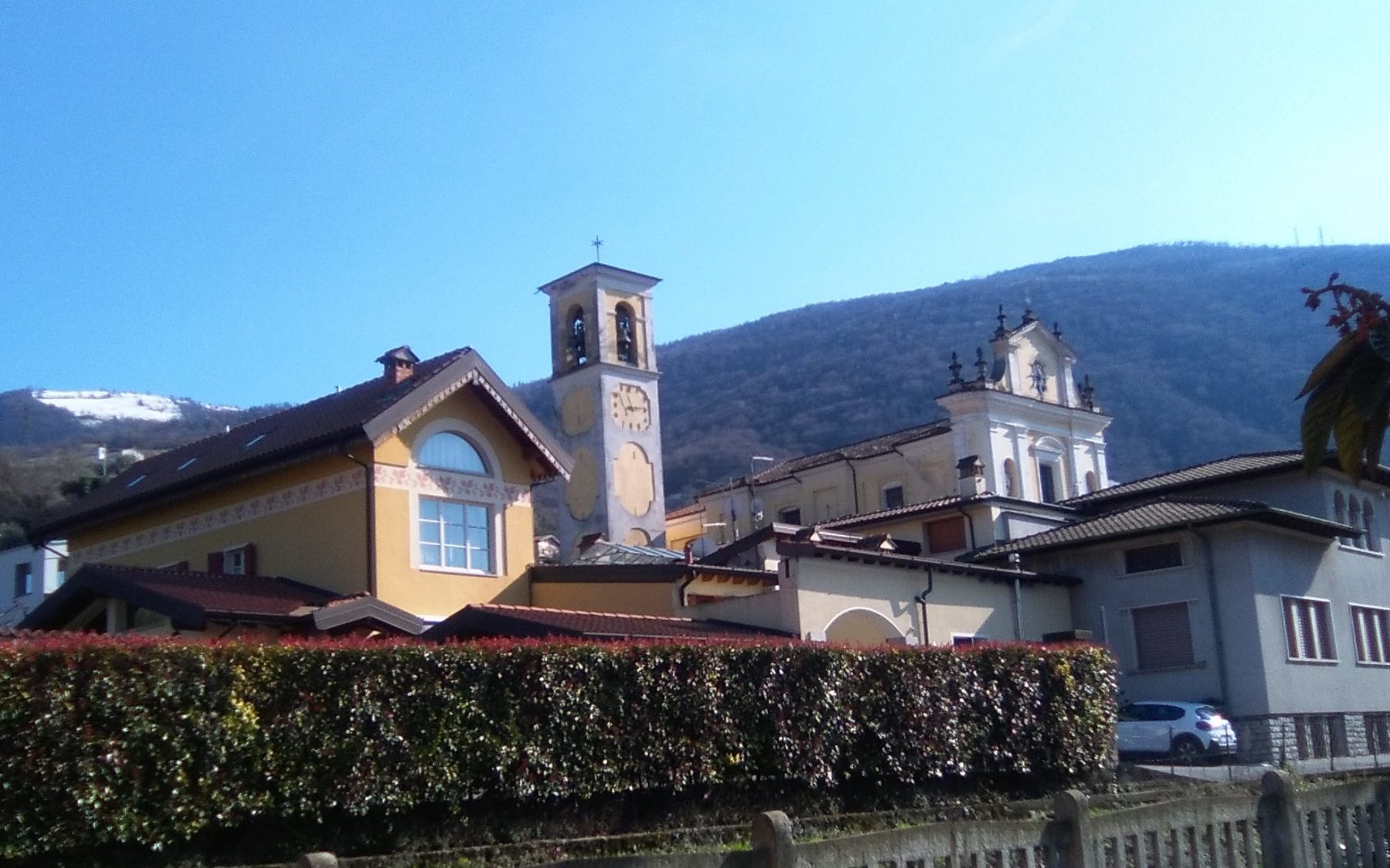 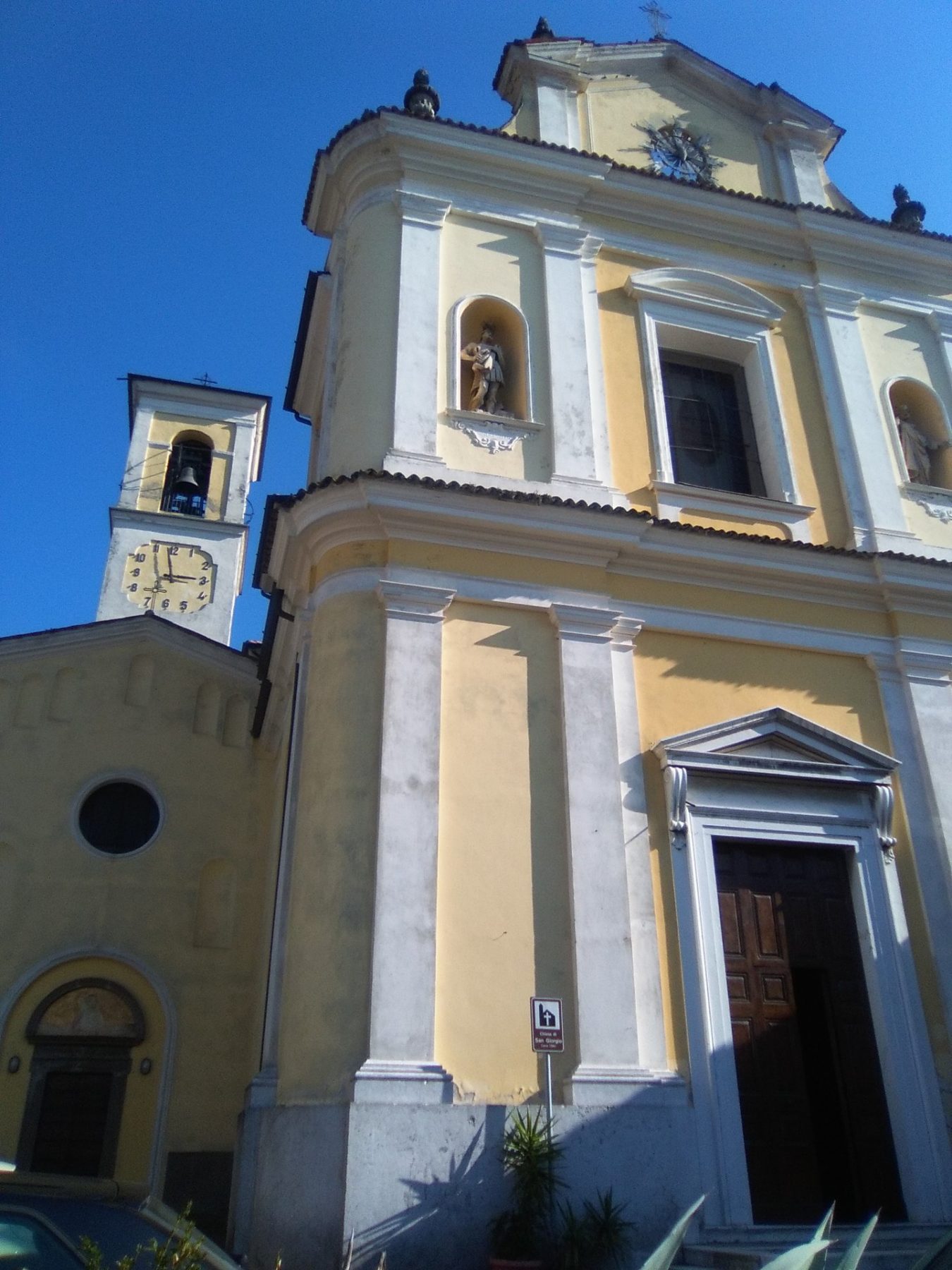 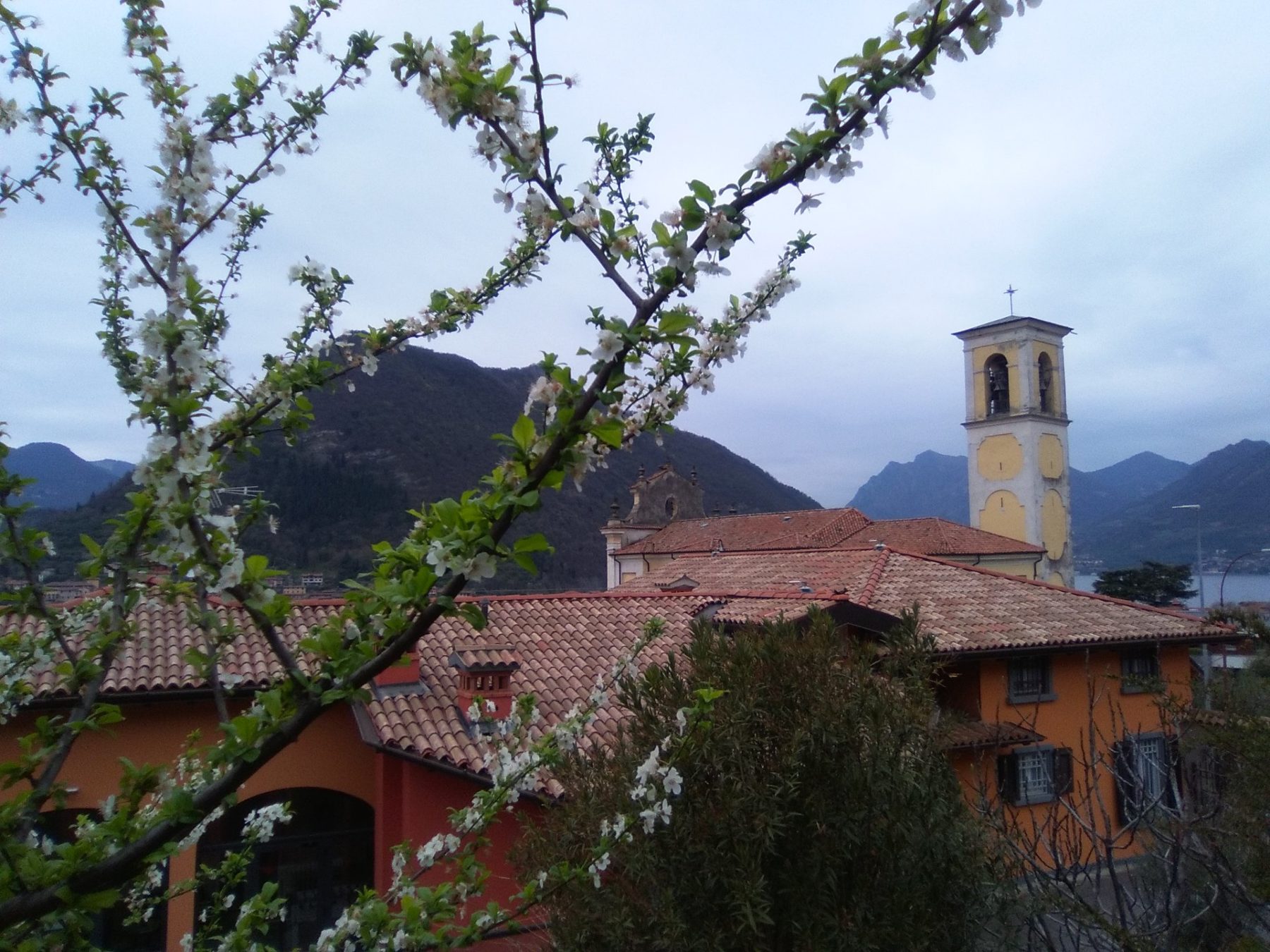 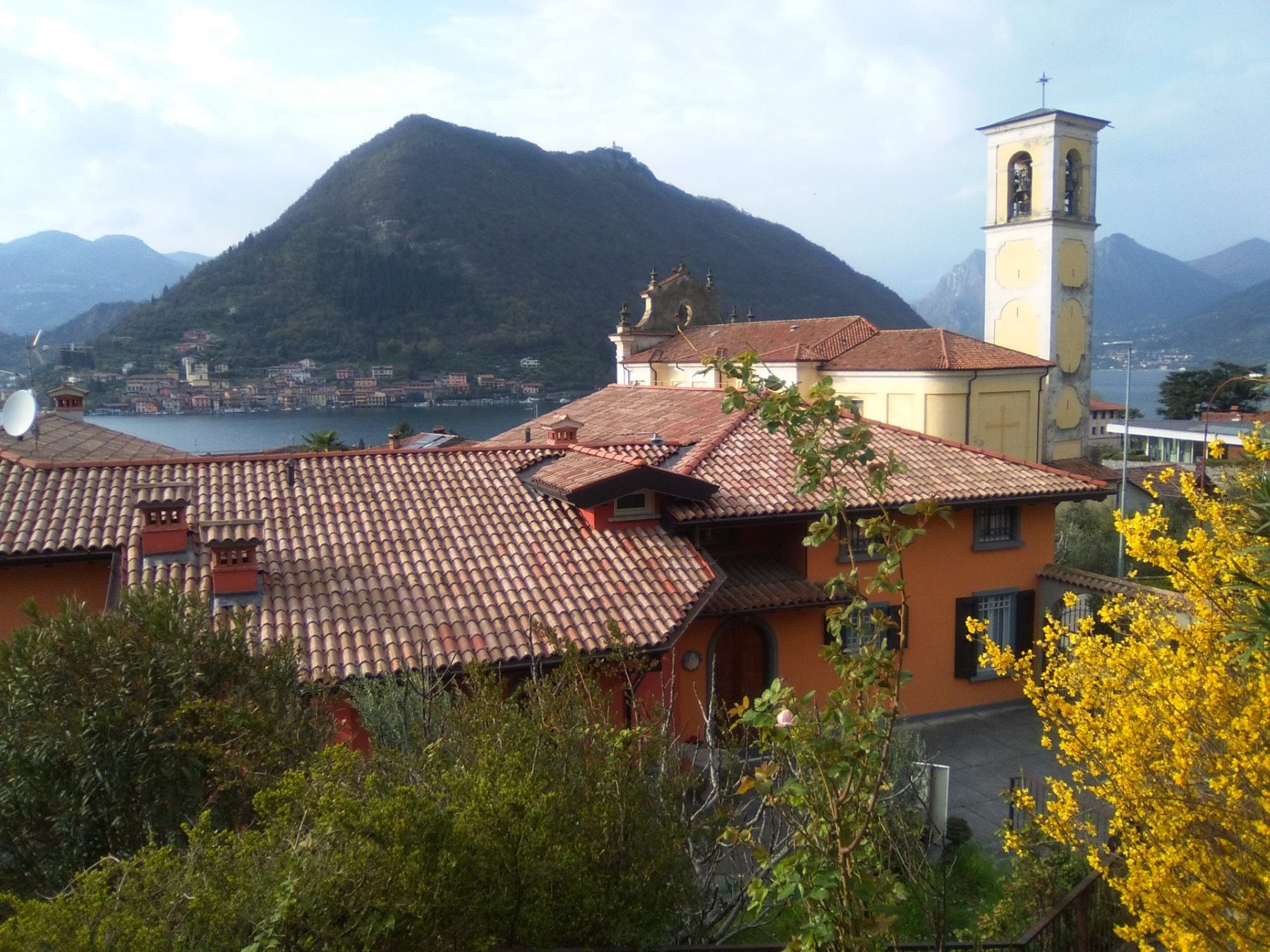 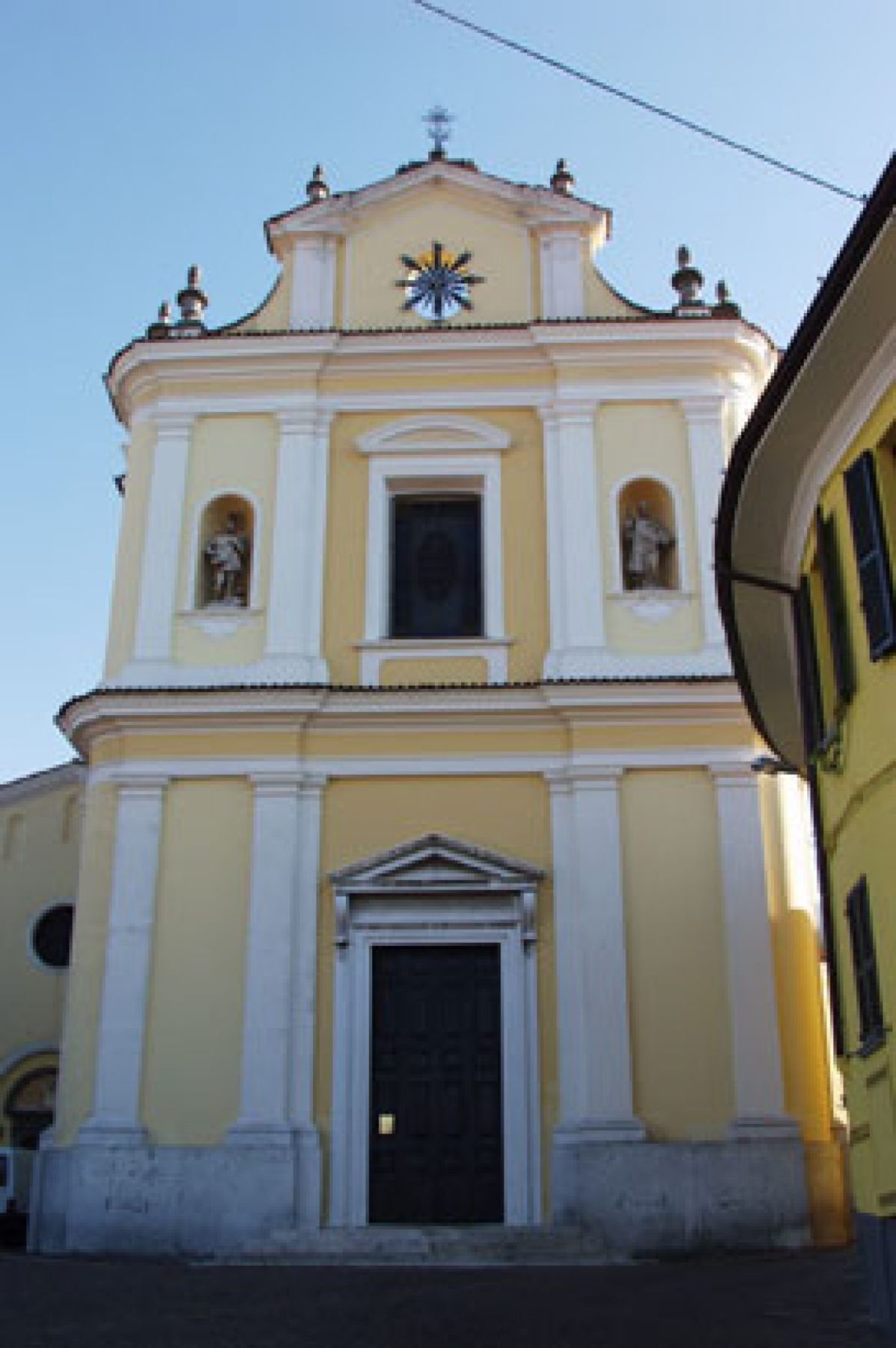 
The parish church of San Giorgio (St. George) in Sulzano was built in 1726, as shown on a scroll located on the triumphal arch. A smaller religious building was standing prior to said date, used as subsidiary church, since the parish church was St. Cassiano (St. Kassian) (now San Fermo (St. Firmus).

The current church, in the village centre and with churchyard overlooking the railway line, features a two order Baroque façade characterised by pillar strips and a belt course frame. The top features a triangular pediment with a central, decorated oeil-de-boeuf. The pair of pillar strips of the first order, laying on Botticino stone plinth, divides the space featuring the main portal in the same stone at the centre. The upper part, also interspersed by pillar strips, features two niches on the sides of the window, housing the statues of St. George and St. Joseph. The bell tower (1760) rises besides the church. It was either designed by Antonio Turbini from Lugano or Giovan Battista Caniana from Romano di Lombardia; the latter previously designed the parish church in Sale Marasino in 1737.

The church is characterised by a single nave with longitudinal floor plan, sequenced by scagliola paired columns; the vaults were decorated by a workshop of travelling artists, from Lombardy, perhaps also from Ticino, close to Carlo Innocenzo Carloni in terms of style and colours. The first of the five bays of the nave depicts St. Roch, St.Fabian, St. Firmus and a Saint Pope; the second depicts St. George and the Fall of the Idols, while the squinches represent the allegories of Prudence, Justice, Fortitude and Temperance; the third depicts St. Kassian, St. Joseph and St. Hyppolytus; the fourth The martyrdom of St. George and in the squinches, St. Augustine, St. Ambrose, St. Gregory the Great and St. Jerome; the fifth depicts The martyrdom of St. Catherine of Alexandria. The five plaster statues attributed to an artist from Como Stefano Salterio depicting St. Lucy, King David, St. Paul, St. Peter and St. Apollonia, in a lively style characterised by a remarkable plastic dynamism are of the same period of the frescoes.

Four altars are located on the sides of the nave, with polychrome marble frontals and mixtilinear frames: the altars of St. Louis Gonzaga and the Holy Heart of Jesus are located on the left, featuring 19th Century frames and statues, while the altars of Our Lady of the Rosary with altarpiece (19th Century) surrounded by the Mysteries of the Rosary (oil painting) are located on the right, some of which realised by Sante Cattaneo. The wooden statue of St. Anthony of Padua (1793) refers to artists of the Fantoni workshop.
The quadrangular sanctuary with two side choir stalls is raised compared to the nave: the organ built by Angelo and Aurelio Bossi from Bergamo in 1840-1845 is located in the left stall. The polychrome marble high altar is ascribed to Domenico Carboni from Brescia. The 19th Century frame houses a 1937 painting by the artist Rita Massardi. The vault is frescoed with St. George in glory, the squinches with the four Evangelists and the apsidal conch with the Calvary.

The sacristy vault was also frescoed by 18th Century artists: the Annunciation can be admired, while on the sides we can find Isaac’s sacrifice, an Eucharistic Allegory, Elijah fed by the Angel, and Melchisedech’s sacrifice (1763).

Finally, the interesting painting by Domenico Voltolini depicting the Madonna and Child, saints and souls in Purgatory is located in the inner façade.

Opening:
Open one hour before the celebrations; for info contact the parish priest.